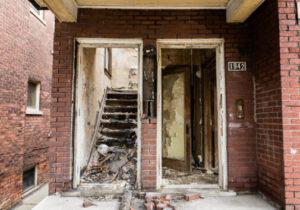 For the past half-decade, Detroit’s government and community groups have worked to tear down abandoned houses and other buildings in the city’s most blight-stricken neighborhoods, in the name of public safety and quality of life.

Now, a new University of Michigan and Harvard University study shows an 11% drop in homicides and serious injuries caused by firearms in the areas where more than a few demolitions took place. The study does not find that such incidents went up in nearby neighborhoods.

The analysis was led by Jonathan Jay, a scholar with the Firearm Safety Among Children and Teens coalition based at U-M. Jay and colleagues combined data from the Detroit Demolition Program with data from law enforcement on serious assaults and homicides committed with firearms in the areas where demolitions occurred.

Zimmerman, who is also the director of the Michigan Youth Violence Prevention Center, said demolitions are part of the process of cleaning up neighborhoods that show people care about the place and are paying attention, which results in people feeling safer and more likely to be outside and interact with their neighbors. Continue reading here.