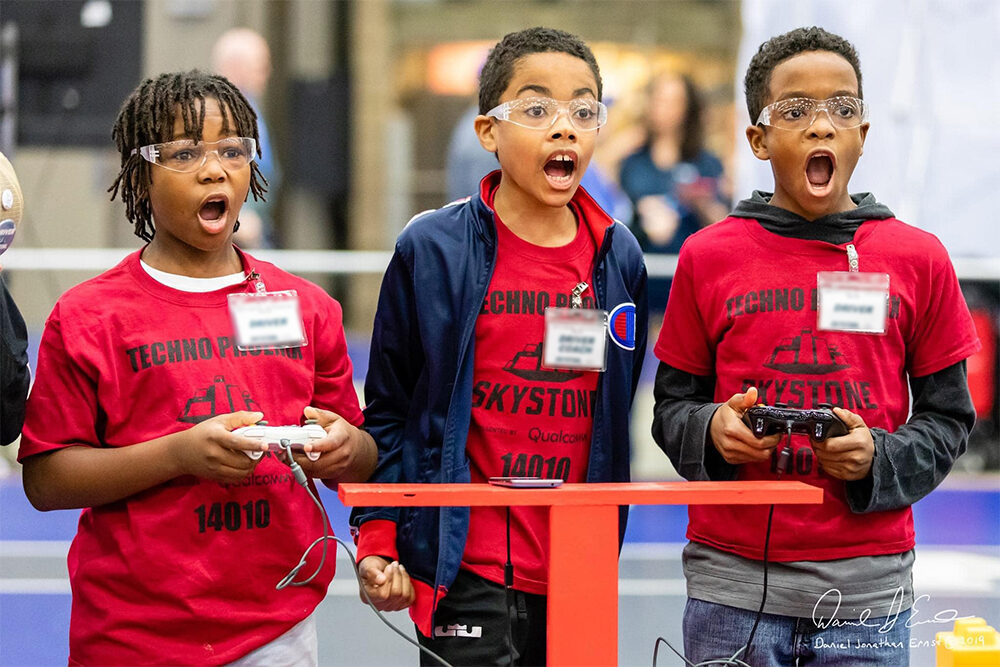 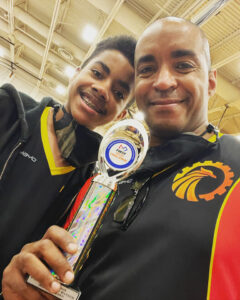 Lyon Pryor and his son.

A few years ago, Leon Pryor (BS EE 1997) went to cheer on his son, at the time an elementary schooler in the Detroit Public Schools system, as he competed in a FIRST Robotics competition. But it was more like watching the Bad News Bears.

“The team was really having some fundamental issues,” Pryor said. “My son was really upset, and I recognized that with all my experience as an engineer, I could definitely help.”

FIRST Robotics (For Inspiration and Recognition of Science and Technology) is a program where school teams design and build robots to compete in an annual contest. Each team is given a basic robotics kit, but it’s up to them to decide how to approach the design and what components to use. Pryor joined his son’s team expecting to serve as an advisor, but then the teacher in charge of the team had to take a leave of absence, and Pryor suddenly found himself as head coach of First Lego League team 37035 the FLICSBots.

“I told my son, look, I don’t know what we’re going to win, but we will win something,” Pryor said.

That first year, the FLICSBots qualified for the state competition, a satisfying improvement from their previous attempts. The following year, Pryor’s son moved up a level to the school’s middle school robotics program and he followed him and became the head coach for First Technical Challenge team 14010 Techno Phoenix.  The team again qualified for the state competition while climbing a few spots in the ranks, but Pryor realized that some of the other teams had an advantage his didn’t.

“I noticed that teams from other areas had these relationships where they were collaborating on problems,” Pryor said. “But the Detroit teams were really siloed. We weren’t talking to each other, and I thought, this is stupid. So, I went to the other Detroit coaches and I said, let’s band together and help each other.”

FIRST Robotics encourages this type of collaboration, which they call “coopertition.” Pryor initiated an effort to get the Detroit teams working together in the offseason to share resources and knowledge. He also cemented a strong relationship with two metro Detroit teams that were also working with Detroit Schools, Kinematic Wolves FRC 5577 and Frog Force FRC 503. Led by Pryor, these teams unified their efforts and to create the Motor City Alliance, a 501c3 that works with over 70 Metro Detroit elementary and middle school teams annually.

Pryor’s team was gearing up for their third season when the pandemic hit. They were shut out of their workspaces, but they didn’t want to lose their momentum. They used remote resources, and Pryor ferried parts to students’ homes allowing them to build individual components in isolation and over Zoom. When the weather improved, the team got together to work outside. They built their robot on the sidewalk, while maintaining some much needed, albeit socially distanced, in person interaction.

“We kept pushing, and that year in competition, we got the Inspire award, which is the highest award that FIRST Robotics has,” Pryor said. “It’s for the team that most embodies the spirit of the competition, so that was fantastic.”

But their robot didn’t fare so well during competition. 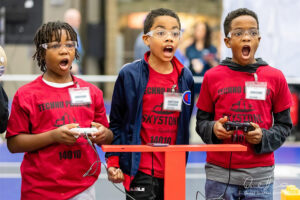 “The robot will always betray you,” Pryor said. “But it’s okay, because the kids are learning that hey, even if you fail, you can have a great time, and you learn a lot for the next time.”

As the pandemic restrictions gradually loosened the following year, Pryor brought nearly two dozen teams from the MCA together for group collaboration sessions in gymnasiums. The teams more than doubled the number of work hours they normally have to prepare for the contest, and as a result, a record number of Detroit teams qualified for the state competition.

They won. Team FTC 14010 Techno Phoenix became the first Detroit Public School team to win a FIRST Robotics state championship. They were also runners up for the Inspire award at the State level.

Transforming from a nearly last-place team to state champions in a few short years has everyone taking notice. Pryor’s middle schoolers were so impressive that the president of the FIRST Robotics program in Michigan asked them to assist the high school team FRC 8280 K9.0 Robotics, which competes in a more rigorous contest. The team was in danger of losing their funding unless they competed during the season. Pryor’s team of eight graders along with two high school students were able to fabricate, construct, and program a 120-pound industrial robot from scratch in just three weeks. They competed and nearly won one of the local competitions and narrowly missed an opportunity to compete in the high school state championship in Saginaw.

“It was great, because I heard other teams talking about how they should be very afraid of our team,” Pryor said. “If we can nearly win a high school competition with middle schoolers and three weeks, what can we do when we have a sizable team of high schoolers and a full season to prepare?”

Pryor will continue as the coach of team FRC 8280, and while the goal of involving his eight grade students was to help the high school team, the eighth graders also gained invaluable experience. Pryor will extend this opportunity to students annually. Team 8280 will offer an apprentice program to help students prepare for the more rigorous high school competitions.

Recently, Pryor brought a few members of his FIRST Robotics team to campus to explore the robotics research being done at the university level. They toured the Robotics Building, the Lurie Nanofabrication Facility, and the Biologically Inspired Robotics and Dynamical Systems Lab.

“The proving ground and testing facilities were particularly impressive as was the biological modeling we saw,” Pryor said. “The nanofabrication work is so jaw dropping I’m still having trouble wrapping my head around it. The kids told me they want to come to Michigan. Immediately.”