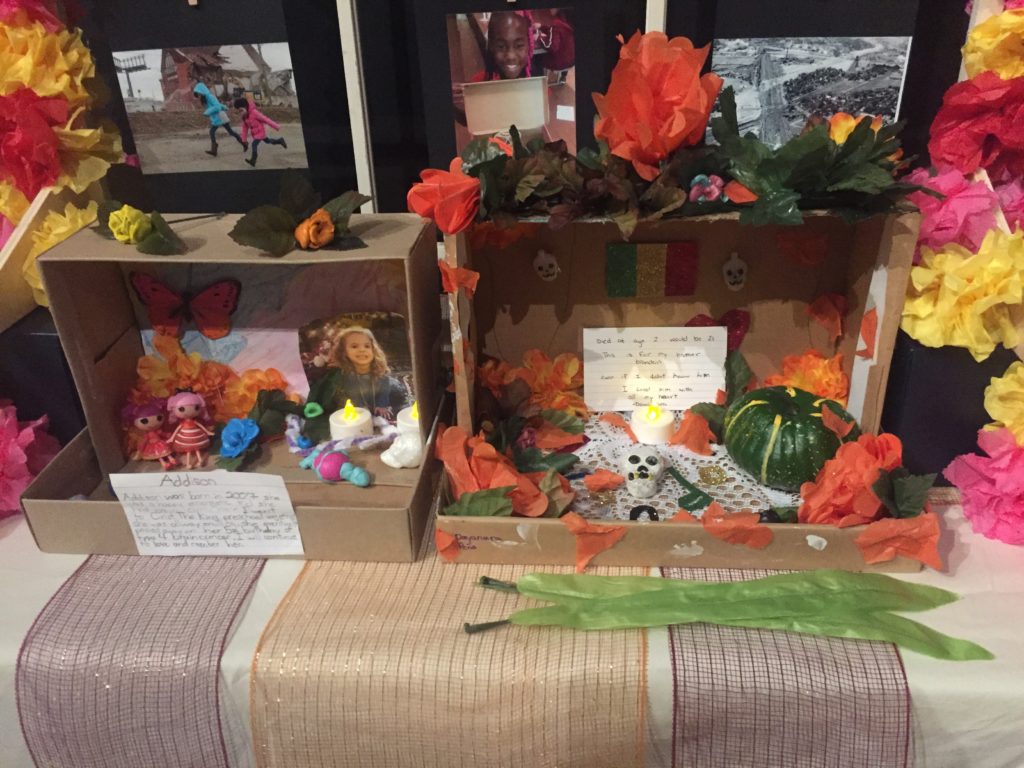 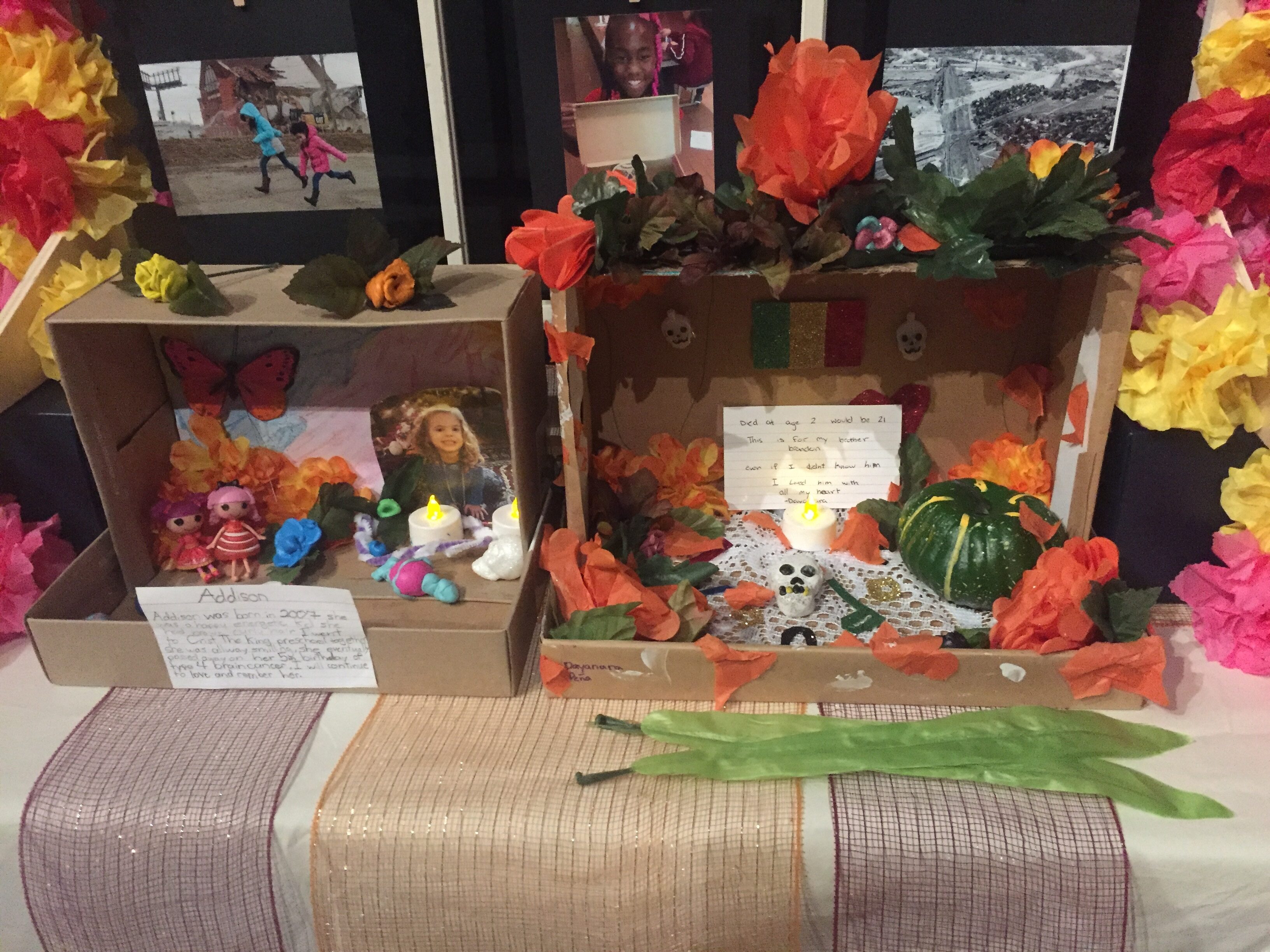 Ofrendas created by children in Detroit this summer are part of an exhibit at the Detroit Institute of Arts about the Day of the Dead. 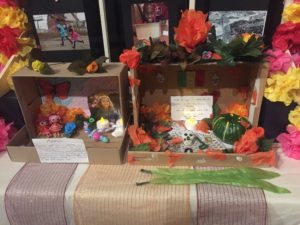 Ofrendas created by children in Detroit this summer are part of an exhibit at the Detroit Institute of Arts about the Day of the Dead.

It is noteworthy when a world-renown cultural institution housing priceless art gives you a chance to display what you did over your summer vacation. That is what the Detroit Institute of Arts is doing for a group of Delray students as it honors their families, stories and creativity through their personal ofrendas.

As part of its annual Day of the Dead tradition, the DIA in collaboration with the Mexican Consulate of Detroit selected the ofrenda project I worked on this past summer with nearly two dozen elementary and middle-school students at the Delray Community House. The DIA exhibition, Ofrendas: Celebrating el Día de Muertos, will be on display from Sept. 28, to Nov. 10. 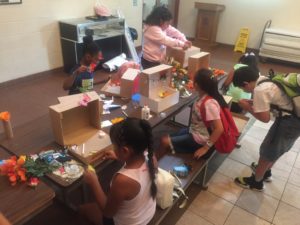 Children from Detroit’s Delray neighborhood work on ofrendas in August.

So how did a summer class turn into something that produced museum-worthy works of art? Honestly, my head is still trying to get around that. It started about a year ago when I received a 2018 Knight Arts Detroit Challenge grant to create an archive, artwork and photography honoring a Detroit neighborhood known as Delray.

Delray is located along the Detroit River in Southwest Detroit. It is next to Zug Island, a largely isolated area that is best known as being the location of the Gordie Howe International Bridge. That bridge will cover about 160 acres when it is estimated to be completed in 2024.

As part of the Delray Archive, I began doing oral histories, collecting historical objects and documents and researching Delray’s stories. I honed these skills while a student at the University of Michigan in Ann Arbor, where I received a degree in English and communications. I also was a reporter and editor at The Michigan Daily, the student newspaper. While on campus, I took history, music and art classes alongside those in my majors, giving me a sampling of the great works of culture and fine tuning my desire to contribute what I could to those subjects. 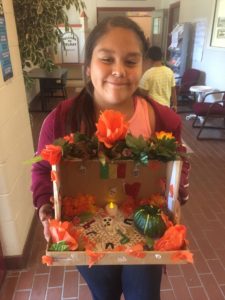 Dia, used her ofrenda to honor a brother who died at age 2 but continued to impact her.

As I started working on the Delray Archive, I met with Delray Community House officials, who suggested the best way to meet residents was to attend events, offer my research skills to the community and provide assistance with its summer programming.

The result was “See, Speak, Say,” a twice-a-week class held from June through August where my daughter and I met with about a dozen Delray-area kids to talk about art, music, poetry, manga, writing and everything else. The kids made artwork about their lives and memories of Delray. We wrote poems about the community. We took pictures of the neighborhood as the grant allowed me to give each student a camera so they could document their day-to-day activities and what they found beautiful about Delray.

In July, the DIA sent out a request for proposals for ofrenda alters. Delray could be described as a neighborhood near death – shuttered factories, blighted landscapes, empty institutions – except for the few families and businesses who have chosen to stay. These kids who call Delray home seemed like the right people to create such a tribute. 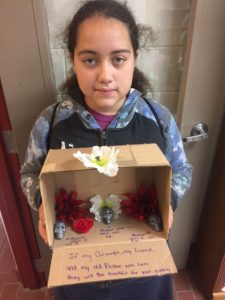 Abigail told of three deaths that affect her through the lens of her mother’s grief.

Our project, “Through a Child’s Eyes: The Dead of Detroit’s Delray,” proved how kids can plain, brown-paper covered shoe boxes and build breathtaking art. With the bare-bones supplies of clay, crayons, paper flowers and tissue, they constructed ofrendas that both broke my heart and sent it soaring.

Dia, the tween art genius, used her ofrenda to honor a brother who died at age 2 but continued to impact her. Elizabeth mourned her great-grandmother, the family’s matriarch. Abigail told of three deaths that affect her through the lens of her mother’s grief. Each child honored the people who meant something to their families as well as the community. We created more than two dozen ofrendas, and 10 of them were included in the final DIA exhibit.

Through this project, I hope the wider community sees the talent and passion in each of these ofrendas. Delray is a ghost of what it once was, and the residents’ voices have long been ignored. But the people who live there and honor it with their hard work daily deserve to be seen and heard. I believe that giving their artistic expressions such an important place within Detroit’s art museum is a critical way for that to happen.