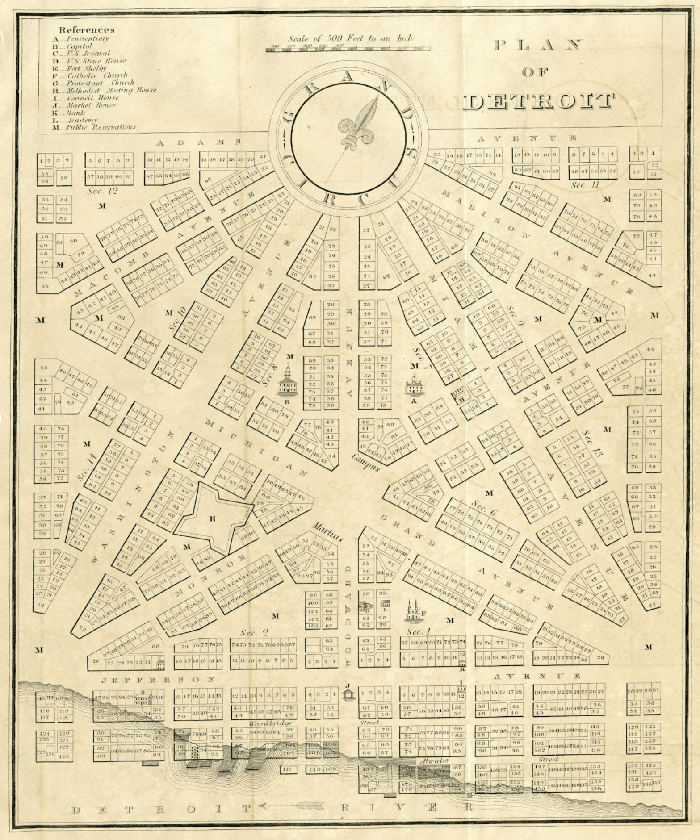 Digital Exhibit: The Detroit River and the University of Michigan

“Plan of Detroit” detail, 1834. Drawn by Philu E. Judd. Courtesy of the William L. Clements Library of the University of Michigan. 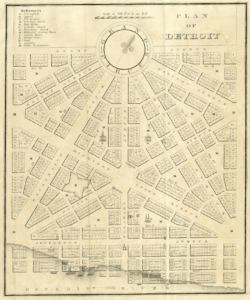 “Plan of Detroit” detail, 1834. Drawn by Philu E. Judd. Courtesy of the William L. Clements Library of the University of Michigan.

When Michigan Chief Justice Augustus Woodward drew up the University of Michigan’s founding charter in 1817, he saw the new educational program as part of Detroit’s urban renaissance.

In 1805, a devastating fire had reduced the timbered city to ashes. Faced with the task of rebuilding, Woodward drew up an ambitious city plan that hinged on long boulevards radiating from the riverfront.

Some of Woodward’s plan for the riverfront still survives today (such as the intersection of Jefferson, Woodward, and Michigan avenues), highlighting the Detroit River’s enduring importance to the city’s identity and economy.

Woodward envisioned Detroit as a global city sustained by commerce on the Detroit River, with a world-class university to match. While the school he founded to promote Detroit’s development moved from a small riverside building in the city to its current, expansive Ann Arbor campus in 1837, the river’s connections with the University of Michigan reverberate through the 19th and 20th centuries.

As a commercial artery, the river built and bankrolled the University; as the site of major engineering projects, it inspired the University’s pioneering naval architecture program; as an international border, it drew University alumni into the Underground Railroad’s anti-slavery networks; and as a damaged but recovering ecosystem, it continues to inspire the University’s ecology and sustainability research.

The Detroit River Story Lab was created to share those stories, and many more. The stories presented on this webpage explore four different facets of that rich and complex relationship. The stories are:

— Revenue stream: How the Detroit River built the University of Michigan

— Over, under, across: U-M’s pioneers in waterway engineering

— Freedom-seekers of the Straits: U-M and Detroit’s Underground Railroad network