Do urban gardens lead to gentrification? Not in Detroit, study finds

One of Detroit’s 130 community gardens seen through Google Street View.

One of Detroit’s 130 community gardens seen through Google Street View.

A wide-scale look at Detroit’s urban gardens finds that while they don’t seem to foreshadow gentrification in the city, there are some unsettling trends about where they’re located and the sociodemographics in those areas.

For example, home and community gardens are more frequently planted in non-Black neighborhoods, according to the study forthcoming in the journal Landscape and Urban Planning.

“We found in the case of community gardens, the folks who had access to those gardens were wealthier, more educated and of a higher socioeconomic status,” said Jason Hawes, a doctoral student at University of Michigan School for Environment and Sustainability. “They also tended to be clustered in non-Black neighborhoods. That’s a really big deal in a city that’s 78% Black.”

Study senior author Joshua Newell, an urban geographer at U-M’s School for Environment and Sustainability, collaborated with Hawes and Dimitrios Gounaridis, a postdoctoral researcher on the study.

“Our mapping effort produced one of the first city-scale datasets of urban agriculture available in the United States,” Newell said. The researchers incorporated Google Street View along with remote sensing to map the home and community gardens. 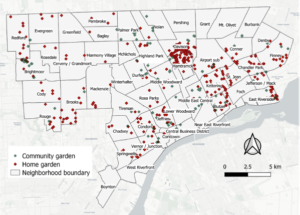 Spatial distribution of home gardens (N =478) and community gardens (N =130) in the 56 neighborhoods of Detroit, Highland Park, and Hamtramck.

The study found that community gardens are in neighborhoods with younger, affluent, well-educated residents, and home gardens are more frequent in areas that are in renewal. And unlike in other cities they compared, researchers found no correlation between urban gardening and potential gentrification.

When economically distressed neighborhoods see new parks, rain gardens and urban gardens pop up, it’s typically a sign of gentrification on the horizon.

That demographic is educated with high income or with lower income paired with relatively high social capital. But they aren’t necessarily displacing existing residents because there’s so much housing available in Detroit, he said.

“But you are changing the patterns of access in the city when you expand these practices that spread beyond Black neighborhoods,” Hawes said. 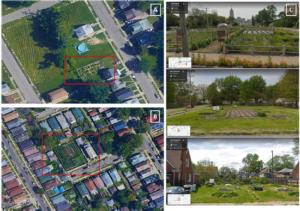 Examples of A) home garden and B) community garden identified via visual inspection over high resolution satellite imagery and C) indicators to identify community gardens via Google Street View.

This indicates that the practice of gardening may be spreading beyond the Black-led institutions like churches and nonprofits that originally promoted it. This could have implications for Detroit’s food scene broadly, as modeling also indicated that gardens are in areas with limited access to fresh produce and are consistently more prevalent in neighborhoods that have stabilized after experiencing high rates of vacancy, foreclosure and housing demolition.

While Detroit’s experience was compared with several other U.S. cities, the Motor City emerged as a “city of its own … a unique case or city,” Gounaridis said. “Maybe in the future, gardens will be more associated with gentrified neighborhoods. But we don’t necessarily know if gardens are causing this gentrification or if other factors are the cause.”