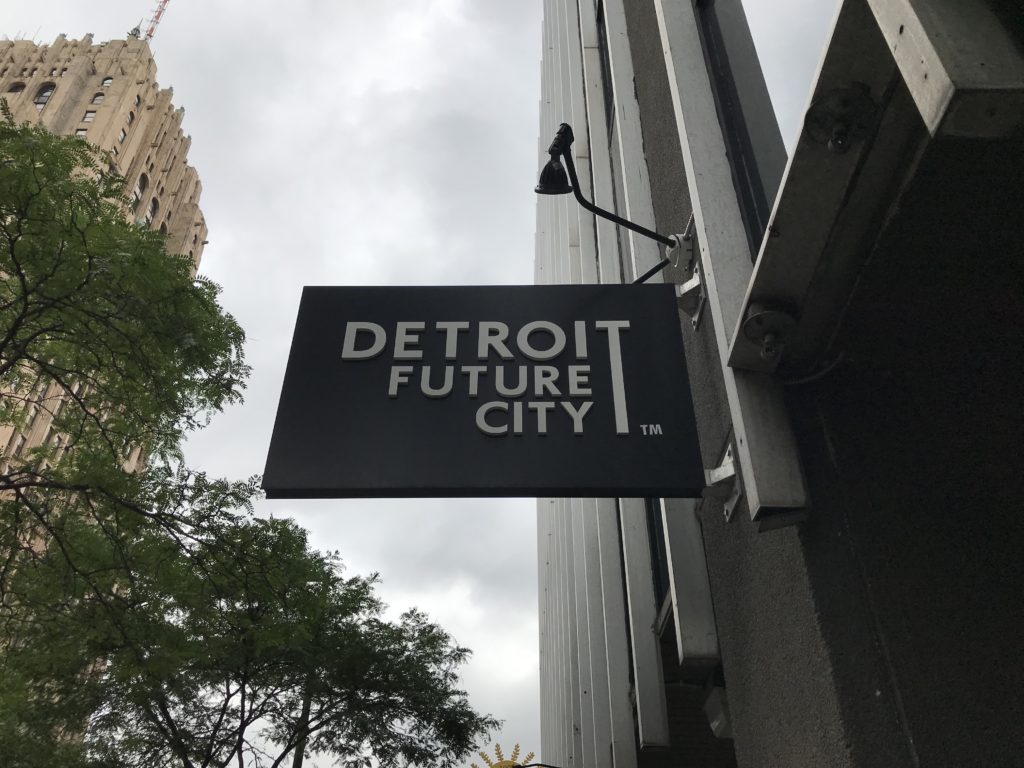 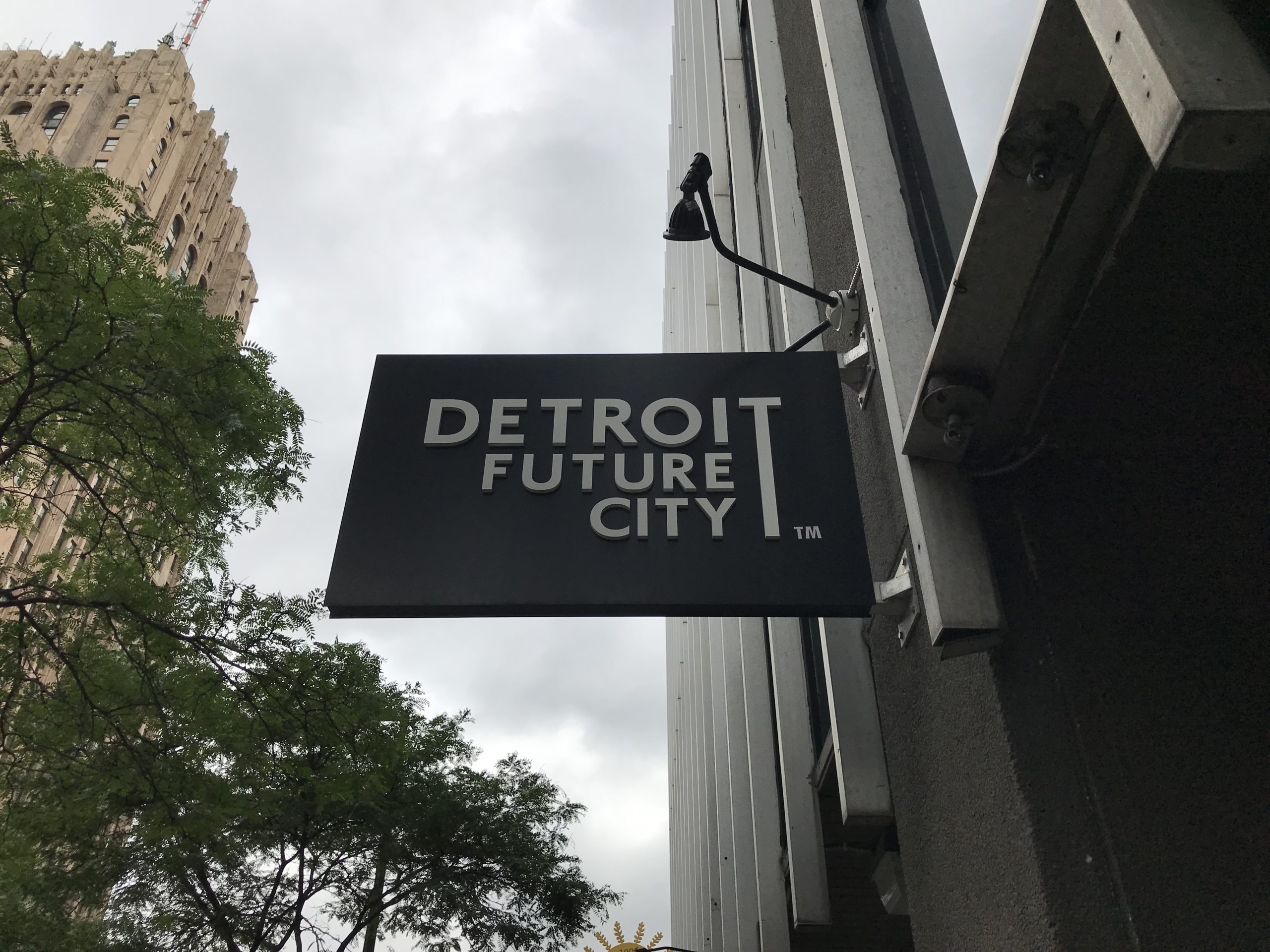 Detroit Future City is located on West Grand Boulevard just across from the Fisher Building.

Detroit Future City is located on West Grand Boulevard just across from the Fisher Building.

With the massive changes Detroit has experienced over the past decade, imagine just how far the city could go over the next half of a century.

That is the daily job of Detroit Future City, a think tank, a group of policy-obsessed advocates and innovation engineers who are taking a bold plan for Detroit’s future and walking it, step by step, from paper into action.

One of its main goals is to create, facilitate and follow up on an extensively researched and vetted 50-year vision for economic development and land within Detroit’s borders. It is a vision of a city that is environmentally responsible, economically diverse and inclusive as well as equitable in terms of jobs, housing and transportation options.

It’s a tall order. But Detroit Future City is holding itself and its stakeholders responsible for the greatest opportunity the city has ever had – a chance to rebuild Detroit and make it Michigan’s focal point. 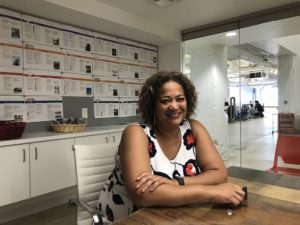 Anika Goss is executive director of Detroit Future City. The U-M alumna has developed a strategic plan for Detroit five decades out.

“We take on the really hard stuff,” and put systems in place that makes sure 50 years don’t go by without important change, said Anika Goss, who became the group’s executive director in 2016.

That means everything from improving the quality of single-family housing for the nearly 700,000 city residents to finding new life for Detroit’s more than 900 vacant industrial properties to empowering neighbors to take the smallest side lots and fulfill their massive potential.

“(These issues) keep our neighborhoods from really taking a positive economic turn,” Goss said. “In order for us to get to that 50-year vision, we actually have to look at the city in its entirety. And in its entirety, it’s not all community farms and shiny, new projects. … We hope that we’re having an impact on all Detroiters.”

It’s a blend of data and design, strategic planning and deep humanity that hopes to create a framework for not only Detroit’s evolution, but the evolution of cities nationwide.

Detroit Future City’s office on West Grand Boulevard just across from the Fisher Building also has its share of maize-and-blue blood in it. Goss, who earned a Masters of Social Work in Community Organizing from U-M, said she has a “Michigan family.” Both of her parents went to U-M: Her mother, Carol Goss, was head of the Skillman Foundation before her recent retirement. Her father, Tom, a business executive, played football from 1965 to 1968 and served as the athletic director from 1997 to 2000. 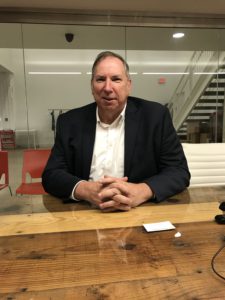 Several of Detroit Future City’s team members also have U-M degrees. Tom Goddeeris, deputy director, is a graduate of the Taubman College of Architecture and Urban Planning. Sarah Hayosh, who serves as the director of land use and sustainability, has a bachelor’s degree in economics and environmental studies. Pier Amelia Davis serves as the land use and sustainability program manager has a master’s degree in urban planning. And Susan Rusinowski, the stormwater innovation manager, has a bachelor’s degree in environmental engineering.

Some of the key projects Detroit Future City is working on include its focus on land use and sustainability, its land and waterworks coalition as well as its mini-grants projects. At the end of 50 years, Goss sees a city with productive, intentional green spaces, a Detroit with economic clusters with great jobs, and neighborhoods that have diverse housing choices and transportation options and family-friendly services.

Detroit will “become a city of choice for the region and becomes the economic anchor that’s holding Michigan together as its largest city,” Goss said. “That’s really what the Strategic Framework was designed to do.” 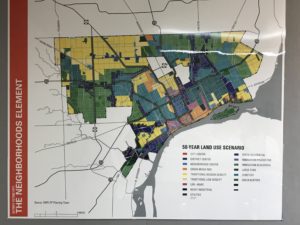 The 50-year plan is mapped out in the Detroit Future City office.

The program awarded its first cohort of grantees in 2016, with installations taking place throughout the city. Since then, the group has invested over $330,000 in communities and vacant land transformation.

“Detroit Future City offered wraparound services,” thinking of everything (we) needed and more, Morris said. “They really help people level up in how they think about land use and how they facilitate land use in the community.”

Greta Guest contributed to this report.