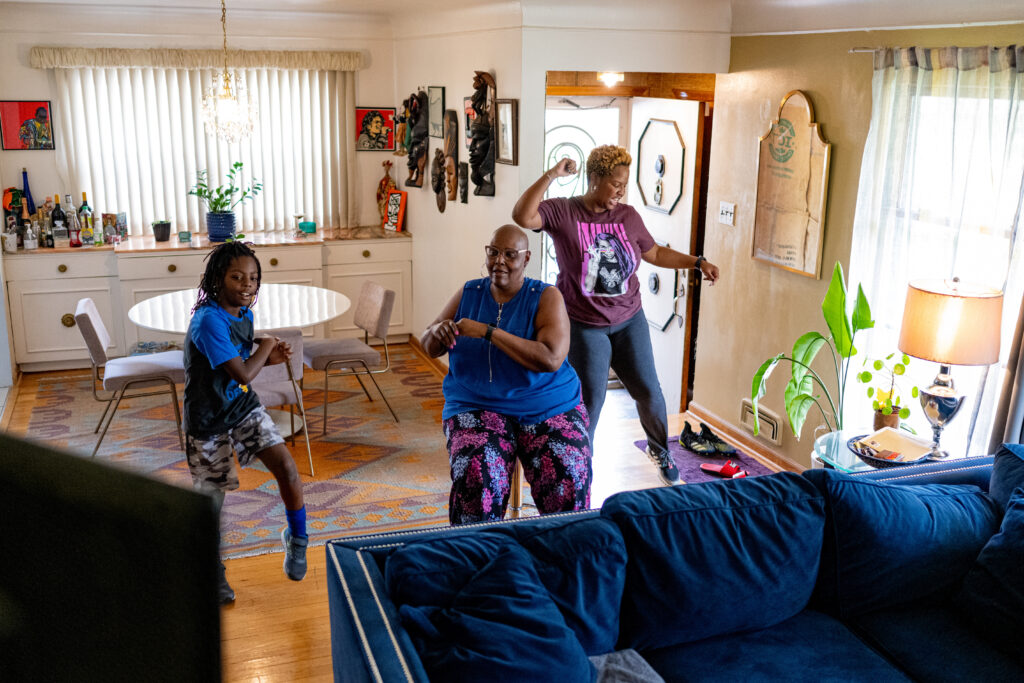 Fit as a family: Classroom fitness program expands to living rooms and parks 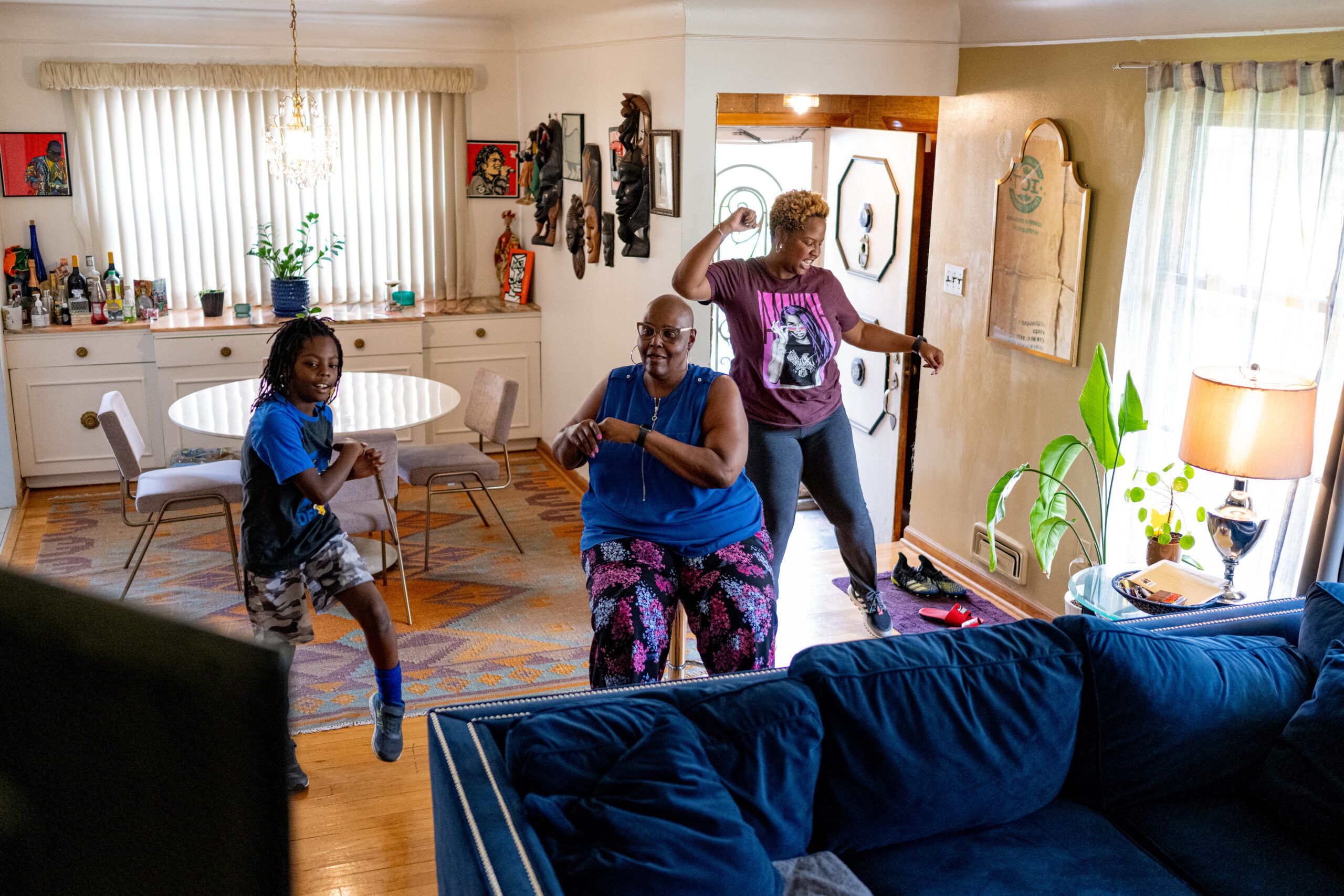 Azaan, his grandmother, Peggy Ruckes, and his mom, Jeanetta Ruckes, meet in Peggy’s living room to exercise with the InPACT program. 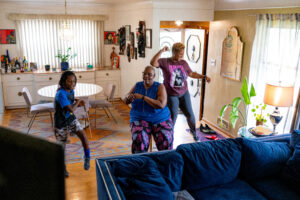 Azaan, his grandmother, Peggy Ruckes, and his mom, Jeanetta Ruckes, meet in Peggy’s living room to exercise with the InPACT program.

Peggy Ruckes, a retired Detroit school teacher, is the first to admit she’s got problems with her knees and hips from sitting too much.

She’s working to change that by using an exercise platform first designed to get kids moving in the classroom that has transformed since the pandemic to reach communities across the state.

It’s estimated that only 23% of U.S. kids get the recommended hour of daily physical activity. InPACT at Home, a fitness program developed by the University of Michigan with state and national partners, received $1 million in COVID-19 CARES funds and solidified a partnership with PBS Michigan Learning Channel to air these homegrown exercise videos on television, beginning January 2021.

These videos were designed to acclimate kids to at-home fitness. InPACT at Home debuted the workouts that comprise the heart of the program last summer—20-minute cardio routines developed and recorded at home by Michigan physical education teachers. Videos also included nutrition messaging and social emotional learning activities, all accessible on smartphones, tablets and computers.

“This makes it easy for me to become more active because I don’t have to pay for it. I just pull it up on the television or my computer and then I can just start exercising,” Ruckes said.

Peggy, her daughter, Jeanetta Ruckes, and grandson, Azaan, meet in Peggy’s living room and get moving.

“It’s pretty good because we all gathered around … like a family unit,” Azaan said.  “Yeah, it’s always fun working out. Sometimes I sweat. But it’s a challenge. I love challenges.”

Jeanetta, a social worker, says the family is trying to get fit during the pandemic and stay on top of their health. And the program helps to bring them together where they’re most comfortable.

“To me, it means trying to have a major impact at home on your health instead of relying on going outside your home,” Jeanetta said. “So instead of just sitting there, it was actually a good tool for us to move around and impact our lives in a positive manner during a negative time.” 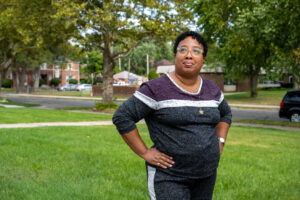 Alanna Price, a program associate for the Detroit Public Schools Community District, who hosts workouts on the Michigan Learning Channel.

If you tune into the videos on the PBS Michigan Learning Channel website, you’ll recognize Peggy, aka “Mama Peggy,” Jeanetta, or “JPOP,” and Azaan, or “Cool Azaan,” in ones developed by Alanna Price, or Ms. AP, a program associate for the Detroit Public Schools Community District.

In the videos, Peggy models how to do the exercises from a seated position.

“We want everyone to be doing it together at the same time and giving it the best that they can at whatever speed and level that they’re at,” Price said. “Once you start a physically active lifestyle and healthy eating, you are more successful in completing it and making it meaningful, while doing it as a whole family.”

Rebecca Hasson, U-M associate professor of kinesiology and director of the Childhood Disparities Research Laboratory, also partnered with Ferndale as part of the Ferndale Parks and Recreation’s fall festival. Families were out in force after soccer games and were led in some activities and family movement. 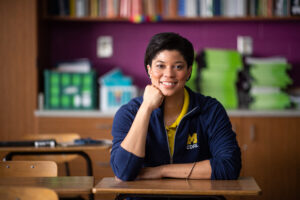 “We’ve been promoting classroom physical activity during the pandemic. We’ve been promoting home activity, and now we’re expanding it to the community,” Hasson said. “Public Television’s Michigan Learning Channel has been a great opportunity to increase access to physical activity to all of the children in this state, irrespective of their internet connection, socioeconomic status or neighborhood environments.”

“We felt it was very important to go to broadcast television because we knew, and it became very clear after the pandemic hit that a third of kids in Michigan—500,000 kids—did not have access to the internet at home,” Gainsley said.

“And that is an urban problem. And it’s also a rural problem. So it’s really a statewide issue where there are students that don’t have access to these materials at home. We already heard about the homework gap and the research and opportunities that kids don’t have access to. So putting it on broadcast was really critical.” 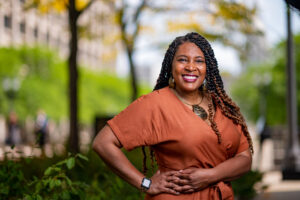 Pamela Pugh, vice president of Michigan’s State Board of Education who received her doctorate in public health from U-M, reached out to Hasson during the pandemic to find ways to expand access to InPACT for school children across Michigan.

“How do we expect a child to learn if they’re not getting the physical activity that they need to have, knowing that physical activity is as important and is so intricately related to the outcomes of a child’s learning,” Pugh said. “With our obesity rates here in Michigan, we should have all hands on deck. We should be taking all avenues to get children engaged and families, parents.”

InPACT at Home evolved and draws heavily on InPACT at School.

Parents and students can do InPACT at Home together, or kids can use it alone, Hasson said. The longer workouts can be broken up throughout the day or done in one sweat session.