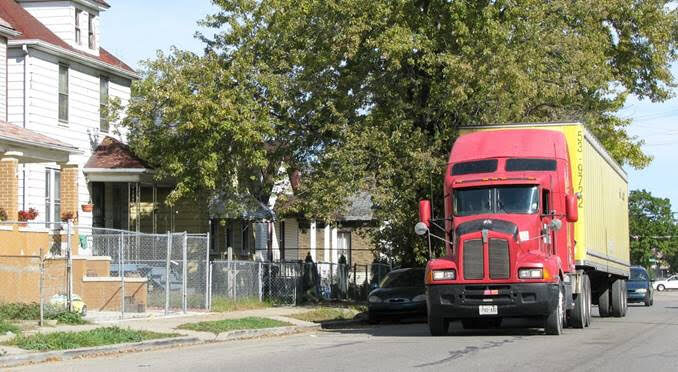 A common sight: An 18-wheeler drives down a local street in a southwest Detroit neighborhood. 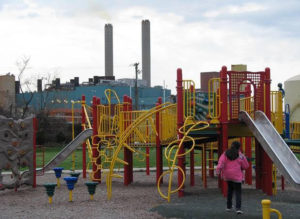 A child plays near Delray’s Detroit Wastewater Treatment Plant, located close to I-75.

A report assessing the health impacts for Detroit’s Delray and southwest community residents living near the Gordie Howe International Bridge site recommends to Detroit city officials that, while city programs such as home swapping and retrofitting are beneficial, such programs should be expanded due to increased air pollutants from the project.

The Gordie Howe International Bridge project, located 3 miles south of the Ambassador Bridge, will connect I-75 and I-96 to Ontario’s Highway 401 in Windsor, Canada. It is in early construction, with a tentative completion date of 2024. 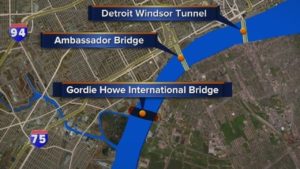 The new Gordie Howe International Bridge will be located 3 miles south of the current Ambassador Bridge, connecting I-75 and I-96 to Ontario’s Highway 401.

In 2017, $45 million was approved through a city-state agreement to benefit community residents near the bridge site with optional home swap and retrofitting programs. The home swap program has been largely successful to date, with over 20 families voluntarily moving to city-owned homes in neighborhoods such as Warrendale, Morningside and Springwells.

Part of the 2017 funding was also allocated for community-based research organizations to perform a Baseline Health Impact Assessment for the bridge area’s residents before major construction. The assessment will soon be shared with city and state officials after the findings were made public in November.

The survey-based assessment of present and prospective resident health discovered that the home swap program, only available to residents within 150 feet of the bridge, should be expanded to 500 feet.

Amy Schulz, a professor of health behavior and health education at the University of Michigan School of Public Health.

“We see health issues up to 500 feet, particularly for children who have a higher risk for asthma,” said Amy Schulz, a professor of health behavior and health education at the University of Michigan School of Public Health, and a principal researcher for Community Action to Promote Healthy Environments. “One of our recommendations is that the home swap program be extended outside of the 150 feet to 500 feet.”

The assessment also found that, prior to bridge construction, baseline airborne pollution rates were already high in the Delray area and surrounding neighborhoods. The bridge project is expected to exacerbate the adverse health outcomes already felt by residents in the affected community.

According to the research, current asthma rates for vulnerable populations such as children and seniors increase dramatically if a resident lives within 500 feet of I-75, or the trucking route to the bridge site. Other negative health effects associated with air pollutants include adverse birth outcomes, cardiovascular complications, and disrupted sleep from noise pollution.

“A number of people in the area are also reporting that the shaking from rumbling trucks is cracking foundations and plaster. They are literally watching their homes fall apart as a result of the construction where they live,” Schulz said.

Angela Reyes is the Executive Director and Founder of the Detroit Hispanic Development Corp. She said an earlier environmental impact study from a federal agency reported that the health of the surrounding community would improve. Reyes facilitated a more accurate representation of the large immigrant and Spanish-speaking population in the assessment. Spanish-speaking surveyors were hired through the organization to speak with residents near the bridge site and gather health-related data. 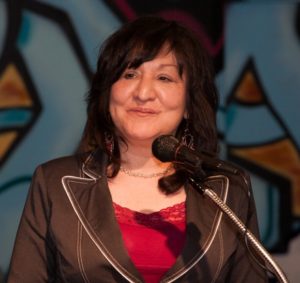 Reyes and Schulz hope to see programs such as the home swap expanded due to the data they have compiled, but they believe the current home swapping is effective and beneficial.

“The home swap benefits the city as well as the residents, since it repopulates parts of the city where the population was less dense. It serves a number of different purposes at the same time,” Reyes said.

Two additional assessments will be performed before the bridge is completed in 2024, one during major construction, and one after the bridge is operational.

“New developments such as the Gordie Howe Bridge are often built for economic reasons, not for health reasons,” Schulz said. “But they have health impacts.”