The only way to break the cycle of poverty is to get people into jobs, but that’s harder than it sounds, said Detroit Mayor and University of Michigan alumnus Mike Duggan.

While the city is working to help people remove obstacles to qualifying for jobs such as getting old criminal records expunged and providing job placement services, there are others it cannot tackle alone. 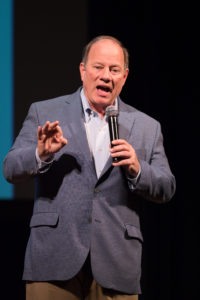 “There are 20 obstacles… everything from housing to childcare… and many of you are working on that,” he told the crowd gathered at um3detroit at the Gem Theater in Detroit on Thursday. “We need what you are doing on the ground to help folks overcome those barriers. I can’t imagine a greater partner in the world to have in this — because we are going to try to change the world — than the University of Michigan.”

Duggan spoke to more than 300 attendees of the third annual um3detroit event. It’s an interdisciplinary gathering that brings together U-M’s three campuses (Ann Arbor, Dearborn and Flint) along with Detroit community partners to share and strengthen connections to Detroit and each other.

The projects U-M is working on with partners range from devising ways to prevent flooding in the Cody Rouge neighborhood to helping students from trauma backgrounds overcome obstacles to finishing high school. The impacts are changing lives.

Wendy Jackson, managing director of the Detroit Program for the Kresge Foundation, and an alumnus, noted the foundation’s commitment of $50 million to a partnership with U-M and others to create a cradle-to-career educational partnership at Marygrove College. The investment places education at the center of community revitalization efforts in the Livernois-McNichols district in northwest Detroit. 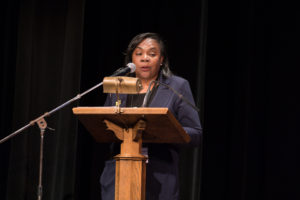 Wendy Lewis Jackson, managing director of the Detroit Program for the Kresge Foundation, and an alumnus.

“We don’t underestimate the power of neighborhoods,” to propel or trap people, she said. “People ask me why I stay committed to the ‘impossible’ turnaround in Detroit. I bristled at the word impossible. I tremendously believe If we write off this city, we do so at the peril of this nation.”

The event also included short, dynamic presentations from faculty and community partners about their work in Detroit. Other sessions encouraged dialogue around issues such as education, economic mobility, poverty, affordable housing, environmental justice and the carceral system in Detroit.

The university’s growing engagement in Detroit is driven by its public mission guided by four goals: economic mobility and growth, cultural expression and arts innovation, access to higher education, and healthy neighborhoods and community development. 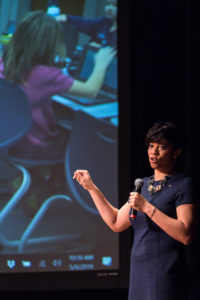 Rebecca Hasson, associate professor of Kinesiology and Public Health at U-M, spoke about changing the “school of thought” on childhood obesity by creating an active classroom.

U-M’s commitment to Detroit was cited by both Duggan and Lt. Gov. Garlin Gilchrist II. Gilchrist, a U-M alumnus and Detroit native, noted that, “now there are more opportunities for partnership,” he said. “I think people want to see Detroit as a place where opportunity is equally distributed. I think we can do it, but only if we do it together.”

Sonia Harb, special advisor on Detroit engagement for the provost’s office and organizer of the event, said many of those 330 who registered were community partners.