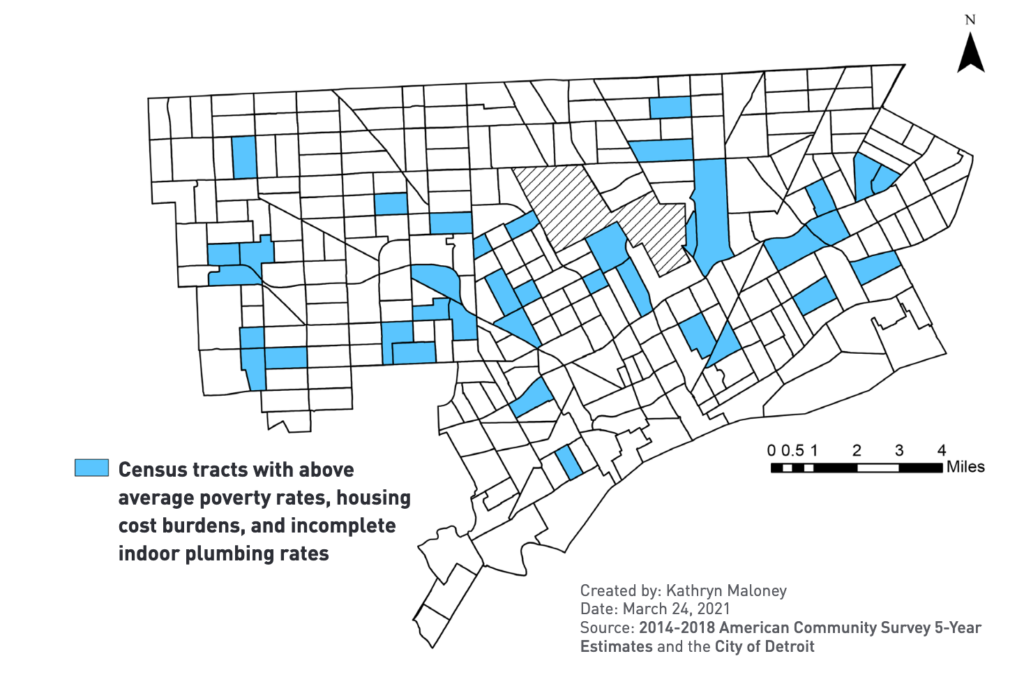 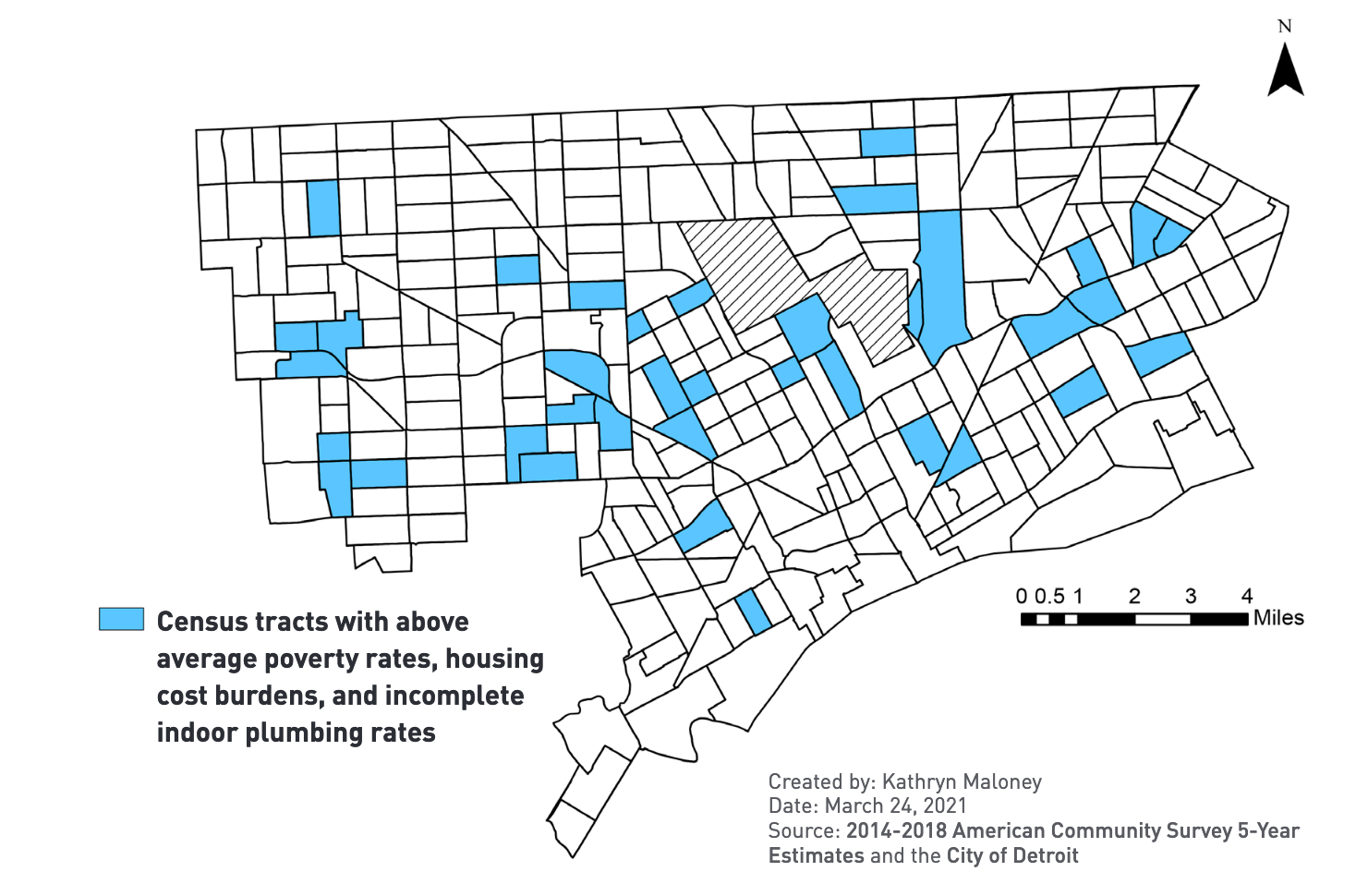 In a new study, researchers analyzed census tracts and mapped the overlap between various factors that affect water affordability. 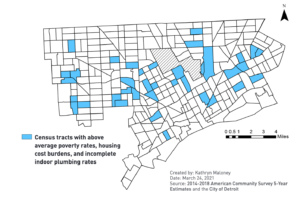 In a new study, researchers analyzed census tracts and mapped the overlap between various factors that affect water affordability.

In a new study of access to clean and affordable water in Detroit, University of Michigan researchers found that about 10% of the city’s population is  “triple burdened,” meaning those residents face higher than average rates of poverty, housing cost burden and incomplete plumbing.

And in some Detroit neighborhoods, up to 10% of homes lack complete access to water, meaning they lack either hot and cold running water, a bathtub or shower, or a sink with a faucet, according to the study funded by U-M’s Poverty Solutions initiative.

“Ensuring water access and affordability for Detroit residents is critical,” said Sara Hughes, an environmental policy analyst at the School for Environment and Sustainability and lead author of the study. “Solving the water access and affordability challenge in Detroit requires engaging with the interactive consequences of an aging system, high levels of poverty and persistent housing challenges.”

Hughes and other researchers at SEAS and U-M’s Erb Institute analyzed census tracts and mapped the overlap between various factors that affect water affordability. They assessed ways current actions, while effective, fail to meet the scale needed for the city to link residents with clean, affordable water.

According to Hughes and her colleagues, Detroit’s median household income ($30,894) is just over half the median for statewide households ($57,144), and more than one-third of the city’s residents live below the poverty line. At the same time, 41% of the city’s residents face high housing costs—defined as exceeding 30% of household income—and this number is even higher for renters (53%).

On top of that, nearly half of the city’s residents pay more than 3% of their income for water, a common benchmark for water affordability. Water consumption per capita is much lower than the national average, yet Detroit residents still have higher water costs.

“The pandemic highlighted how important it is from a public health perspective that people have reliable access to clean water, for hand washing and other measures that are not possible if you don’t have running water or can’t afford your water bill,” Hughes said. “People were also losing wages, making it even tougher to keep up with water bills.”

The majority of Detroit residents’ homes were built before 1950, and some low-income households are in some of the city’s oldest homes, according to the Poverty Solutions policy brief. These aging homes are more likely to need costly repairs that heighten the burden of high housing costs.

The report notes that although state and federal programs exist to assist with energy concerns for households, like the Low-Income Home Energy Assistance Program, similar programs do not exist for water concerns. Funds for water and sewage assistance for Michigan residents are reserved only for emergencies and have gone widely underused by the state.

For Detroit, programs like the Great Lakes Water Authority’s Water Residential Assistance Program assist customers in low-income areas with water bills and reduction of water consumption. WRAP offers conservation audits to households exceeding 120% of the city’s average water consumption, with a cap of $1,500 in repairs and maintenance costs.

The policy brief shows that existing programs, while they provide improvements, fail to meet the amount of Detroit households in need of aid to make substantial repairs.

Although plumbing repairs will not eliminate the water affordability crisis in Detroit, they are an essential step toward providing clean and accessible water, according to the report’s authors.

The other authors of the Poverty Solutions policy brief are Kathryn Maloney, Anna Kaczmarek and Heather Newberry of the U-M School for Environment and Sustainability, and Elizabeth Wallace of U-M’s Erb Institute.