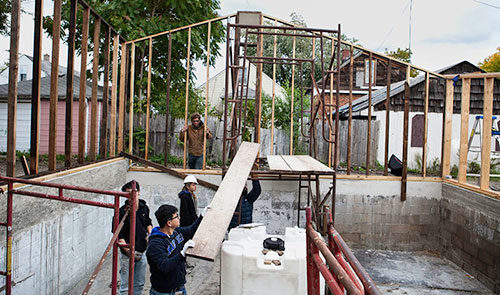 In a Detroit neighborhood shared by Bangladeshi, Polish immigrants, longtime African-American residents and young artists, something is happening.

“I didn’t think it would be so powerful,” U-M’s Steven Mankouche says of the Archolab-Afterhouse project he and his partner, artist Abigail Murray, are leading. Its goal is to repurpose a burned-out house as a semi-subterranean, passive geothermal greenhouse that will serve the neighborhood.

The project at 3347 Burnside Street, just north of Hamtramck, has been creating excitement among residents — and hope – all year.

“We see Afterhouse as a provocative/proactive response to blight and community grown food.”
– Steven Mankouche, Associate Professor of Architecture

“They see people fixing up houses, painting, but nobody here builds something new. I think it shows a certain investment, a commitment to the place,” says Mankouche, associate professor of architecture, Taubman College of Architecture and Urban Planning. 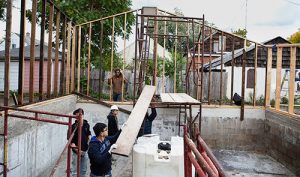 In contrast to urban agriculture projects that require lots of space, Afterhouse is discreet, almost hidden, because it maintains the scale of the original house. Further, the growing climate in the house does not require the expense of active heating in the winter or cooling in the summer.

Hand demolition work began in spring 2014. The cement-steadied foundation serves as the base for an upright frame of repurposed structural lumber. The sturdy wood studs were salvaged from the 1920s home, then de-nailed this past summer. The frame was covered with clear polycarbonate plastic sheeting this fall. The basement is filled with dirt for planting. Current floor drains are perfect to serve the greenhouse project, Mankouche says.

“The idea is to grow crops in a climate comparable to a northern Mediterranean climate. Olive trees, pomegranates, rosemary, certain citrus, kiwi, pistachio — we may try mangoes,” he says.