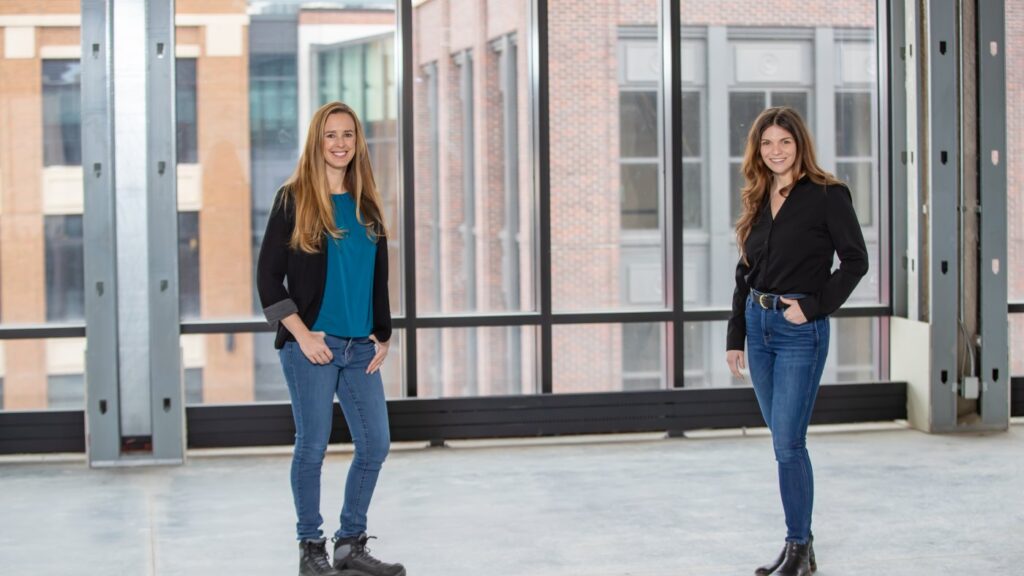 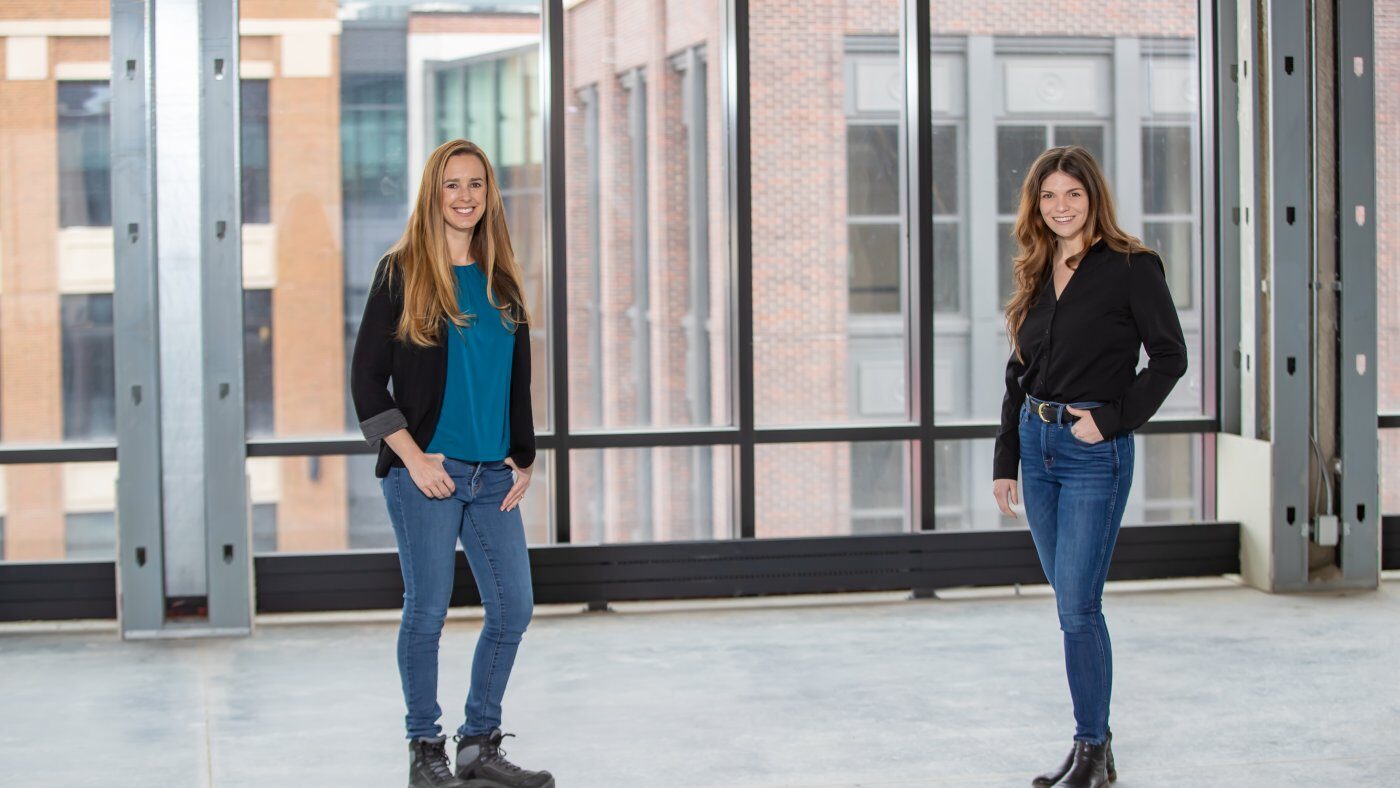 Meredith McLellan, B.S. ’02, (left), and Angela Fortino, M.U.P. ’11, (right), at one of Olympia Development of Michigan’s latest projects along Woodward Avenue in Detroit 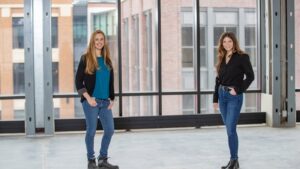 Meredith McLellan, B.S. ’02, (left), and Angela Fortino, M.U.P. ’11, (right), at one of Olympia Development of Michigan’s latest projects along Woodward Avenue in Detroit

They were trained in different disciplines, but together, Meredith McLellan, B.S. ’02, and Angela Fortino, M.U.P. ’11, are part of a team working to reimagine downtown Detroit.

Both are project managers at Olympia Development of Michigan, a part of the Ilitch organization which was born from the Little Caesars Pizza franchise. McLellan and Fortino began working for the company within a month of each other in 2018. Prior to the pandemic, they even sat next to each other in the office.

“We’ve gained valuable insight on the different aspects of project management from one another,” McLellan says.

The pair joined Olympia Development as part of a company growth spurt following its opening of Little Caesars Arena — the home of the NBA’s Detroit Pistons and the NHL’s Detroit Red Wings — and plans to develop the surrounding area as The District Detroit. Along with the Ilitch-owned Detroit Tigers baseball team at nearby Comerica Park and football’s Detroit Lions at neighboring Ford Field, The District Detroit also encompasses the historic Fox Theatre, the Mike Ilitch School of Business at Wayne State University, the new Little Caesars world headquarters campus expansion, numerous dining and shopping venues, and offices whose tenants include Google.

“When The District Detroit was first announced in 2014, I knew it was something I want to work on,” says Fortino. She and McLellan were impressed by the passion of The District Detroit’s leadership, and, “I wanted to be part of the group who was helping to move Detroit forward,” McLellan says. “I understood the company’s commitment to steady and balanced development in Detroit, and I saw that the organization was structured for success.”

The move also allowed both of them to build on the skills and interests they had developed previously. In more than 16 years at SmithGroup, McLellan had been a forensic architect who focused on exterior detailing and building failures, an interior architect, and ultimately a project manager. At Olympia Development, her projects include the Eddystone Hotel, which is located across from Little Caesars Arena, within walking distance of the downtown business district. It will consist of 92 affordable and market-rate residential units and will have street-level retail and a restaurant. Built in 1924, the Eddystone Building is on the National Register of Historic Places and has been vacant since the 1990s. McLellan also is assisting with the pre-construction activities for the Henry Street Redevelopment proposal, which would restore seven 1920s-era historic buildings into new affordable and market-rate residential housing and include green spaces.

“I have a passion for old buildings and love to see them brought back to life,” says McLellan. “I love being able to modernize these historic structures, keeping the craftsmanship intact while providing modern functionality.”

Fortino arrived from Jones Lang LaSalle, a global commercial real estate services company, where she worked on projects ranging from workplace strategy initiatives to quick-service restaurant buildouts. “I learned that regardless of the type of project, the project manager must clearly identify and maintain focus on the project’s goal, set realistic expectations, encourage open communication, address challenges before they become major problems, and in the words of my former director, ‘have grace under pressure.’”

Those skills have served Fortino well at Olympia Development, where she was tapped to help the growing team develop tools, resources, and processes to be successful from project conception to completion. “At times, the learning curve was a challenge, yet I found it highly rewarding to work across the company to identify needs and set up systems that support our long-term goal for developing The District Detroit,” she says.

The learning curve spiked sharply in March 2020. Fortino was gearing up to transition from developing organizational tools and processes to managing real estate development projects when the pandemic hit. So she pivoted her attention to developing remote work and project management systems and trained colleagues across Olympia Development’s business units to work collaboratively while remote.

“As we settle into 2021, it’s exciting to talk with the various colleagues I met during our pandemic response planning and see how they have adapted the tool to further improve their work and own project management, pandemic or non-pandemic related,” Fortino says.

Fortino came to the University of Michigan knowing she wanted to be involved with revitalizing urban centers, a passion shaped by her father’s involvement in local government and observations of how economic hardship affects the built environment as she grew up near Flint, Michigan. She appreciated how Taubman College’s focus on Detroit and Flint blended with a studio in Iceland and her capstone project in Mexico City to “push me out of my comfort zone, introduce me to new ways of designing cities, and inspire me to further explore the world.”

McLellan became interested in architecture as a sophomore at Michigan, liking how it combined art and engineering. Once she was enrolled in the architecture program, she found that she enjoyed the technical courses more than the design courses and credits Karl Daubmann, her instructor for her senior year studio, with “guiding my design and creativity, even when I felt defeated. He understood that architecture is more than being a designer, and that support helped me push through the tough hours in studio, knowing that my career would not be dependent upon being the best at designing.”

Now, as part of a team doing high-profile work in Detroit, McLellan and Fortino hark back to lessons learned at U-M. And Fortino says the importance of teamwork was a big one: “It doesn’t matter how knowledgeable or resourced a group of people are; if they can’t genuinely work together, they won’t be successful.”