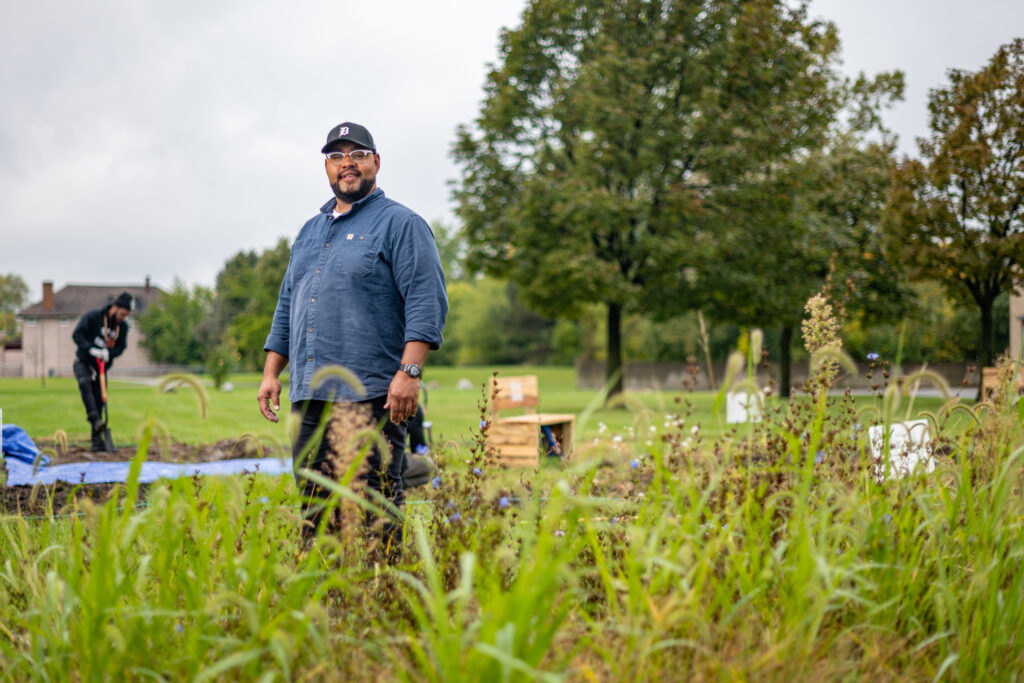 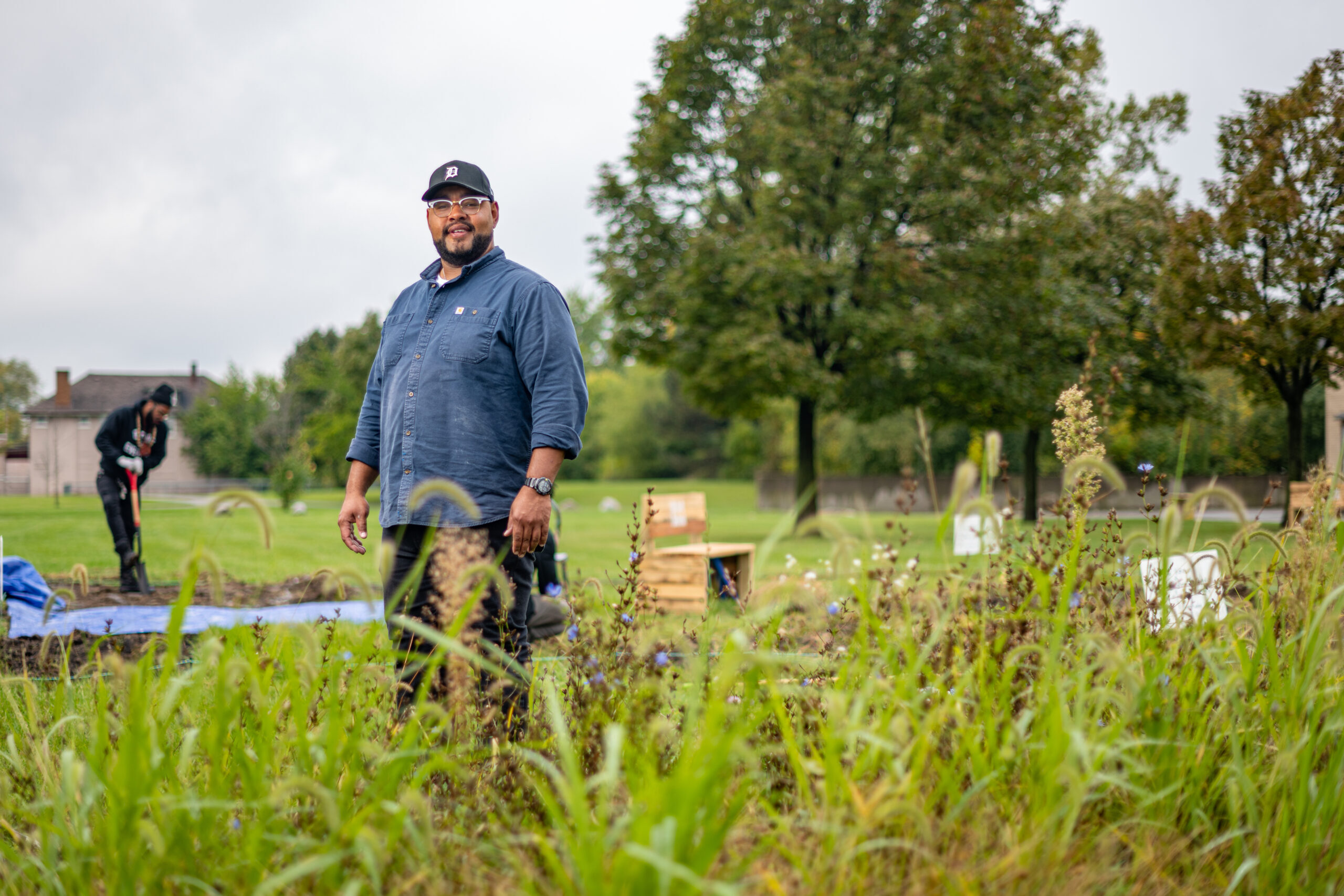 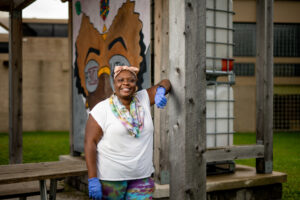 Asia Hamilton planted flowers for her mother, father and sister at the Ancestor Posterity Butterfly Garden in the historic Virginia Park area of Detroit. She said the garden “offers peace, beauty and unity.”

Asia Hamilton showed up on a misty fall day to Detroit’s historic Virginia Park district to plant three flowers: one for her mother, one for her father, and another for her sister.

She was one of dozens of people that stopped by that day to ceremoniously plant blooms one-by-one, each in honor of loved ones who had passed away—most from COVID-19. Many were unable to have funerals during the pandemic.

It’s no surprise so many gathered. An early “hot spot” in the pandemic, the city of Detroit data indicate that more than 2,800 Detroiters have died of COVID-19 to date with more than 7,000 deaths likely related to the virus.

“Losing my mom last year was really shocking, especially to COVID,” said Hamilton. “And since then, I’ve really gotten into gardening. A garden is a place that offers peace, beauty and unity, and I thought it would be an amazing way to honor her and other family members I’ve lost.” 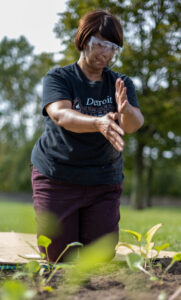 “Every garden needs a soldier in it; this is for Irvin Thompkins,” said Venita Thompkins, referencing her brother, a Vietnam veteran who died from COVID-19 in May 2021, as she knelt down to plant a purple coneflower. 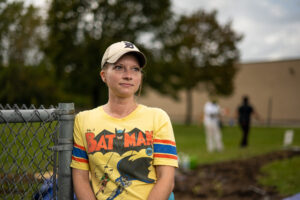 Samantha Pickering found out about the garden over the summer and had been looking forward to participating.

“I lost my dad to COVID April 1, 2020, so I came here to do something in memory of him. Having to grieve through isolation, we never had a funeral or memorial service, so I’m grateful for this opportunity.”

They all had responded to a call for community members to contribute to the planting of the “Ancestor Posterity Butterfly Garden,” located just outside the Joseph Walker Williams Center off of Rosa Parks Boulevard. The three-year-long project is the brainchild of University of Michigan alumnus Douglas Jones, a Detroit-based artist, activist and community organizer, and his co-collaborator and fellow artist Errin Whitaker.

Just before the stay-at-home orders were issued in March 2020, the project was commissioned and greenlit by the city of Detroit and Design Core Detroit. Though the plan was always to design a garden in the historic neighborhood, the pandemic and its devastating impact on the people of Detroit gave it more meaning as plans stopped and stalled but continued to move forward. 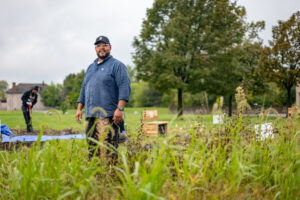 “It feels so great to be out here today, to see this come to life,” said Jones, who greeted each person stepping onto the plot with a cheery hello and a socially distanced elbow bump.

Jones, who has facilitated public art projects in several locations across Michigan including Detroit, Jackson, Ann Arbor, Ypsilanti and Grand Rapids, says the garden is an example of the brand of “public art” that he believes in.

“Through my work as an artist, I’m trying to shift the narrative of public art,” he said. “Most of it is consumptive, but I’ve always thought of it as something that requires participation and collaboration from the community, from the people that will enjoy it most.” 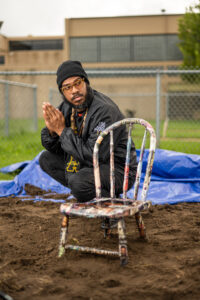 Led by Jones and Whitaker, there were several people who helped bring the project to fruition, including Kyle Bartell, co-founder of Sit On It Detroit, who crafted the wooden benches that surround the garden and Akello Karamoko, a farmer at Keep Growing Detroit who grew the starter seeds for the native Michigan plants that make up the butterfly garden.

While Jones designed the garden, Whitaker created the “ancestor posterity chair” that is positioned in the middle of the plot, where it will eventually be enveloped in plants as the garden matures in the coming years. According to the artists, the chair was inspired by Wole Soyinka, a Nigerian playwright first introduced to Jones while taking undergrad classes at U-M, and his idea of a symbolic chair created for our ancestors, both past and future.

“My biggest influence with the chair was my grandmother. She had three daughters and three grandsons and she never thought we got enough rest as Black men,” Whitaker said. “I made the chair in quarantine, where I was able to sit still and rest. I thought about her a lot while making it, and I thought about all of the people, ancestors, that are continuing to transition during this time.”

Jones and Whitaker are currently working to create potential community programming related to the garden, and to create a plan with the community to continue its upkeep.

“We didn’t realize how powerful the idea would be pre-pandemic when we started planning the project,” Jones said. “It’s full of symbolism—hope, unity, renewal—and I know it will be cared for and nurtured by all of the people who showed up today to grieve and reflect. This is the kind of art that I want to do.”