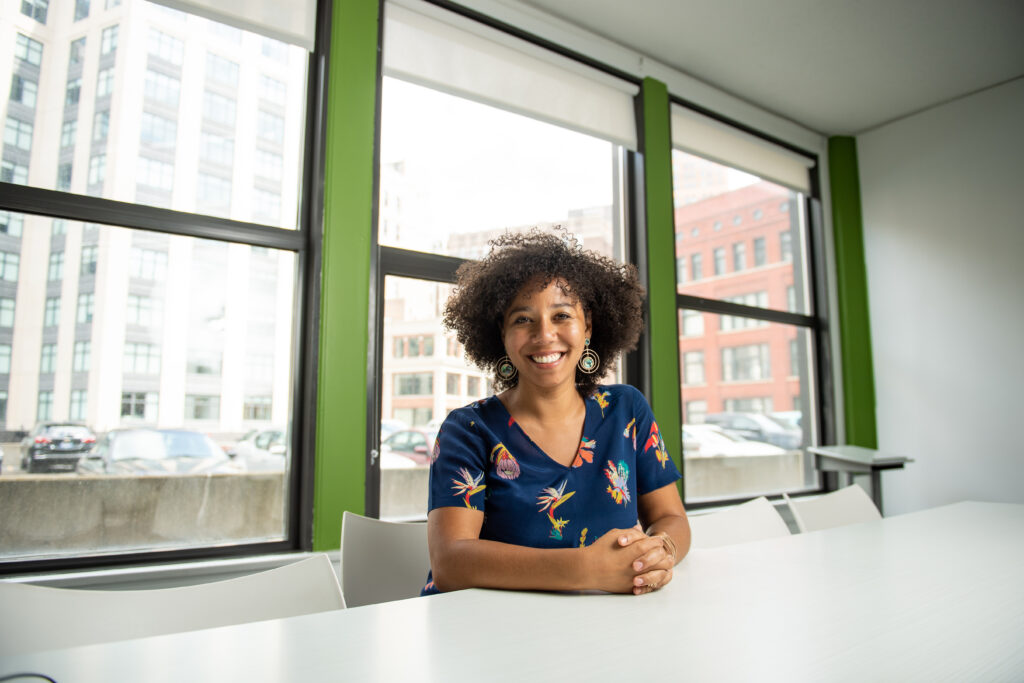 And justice for all: Amanda Alexander brings racial justice front and center 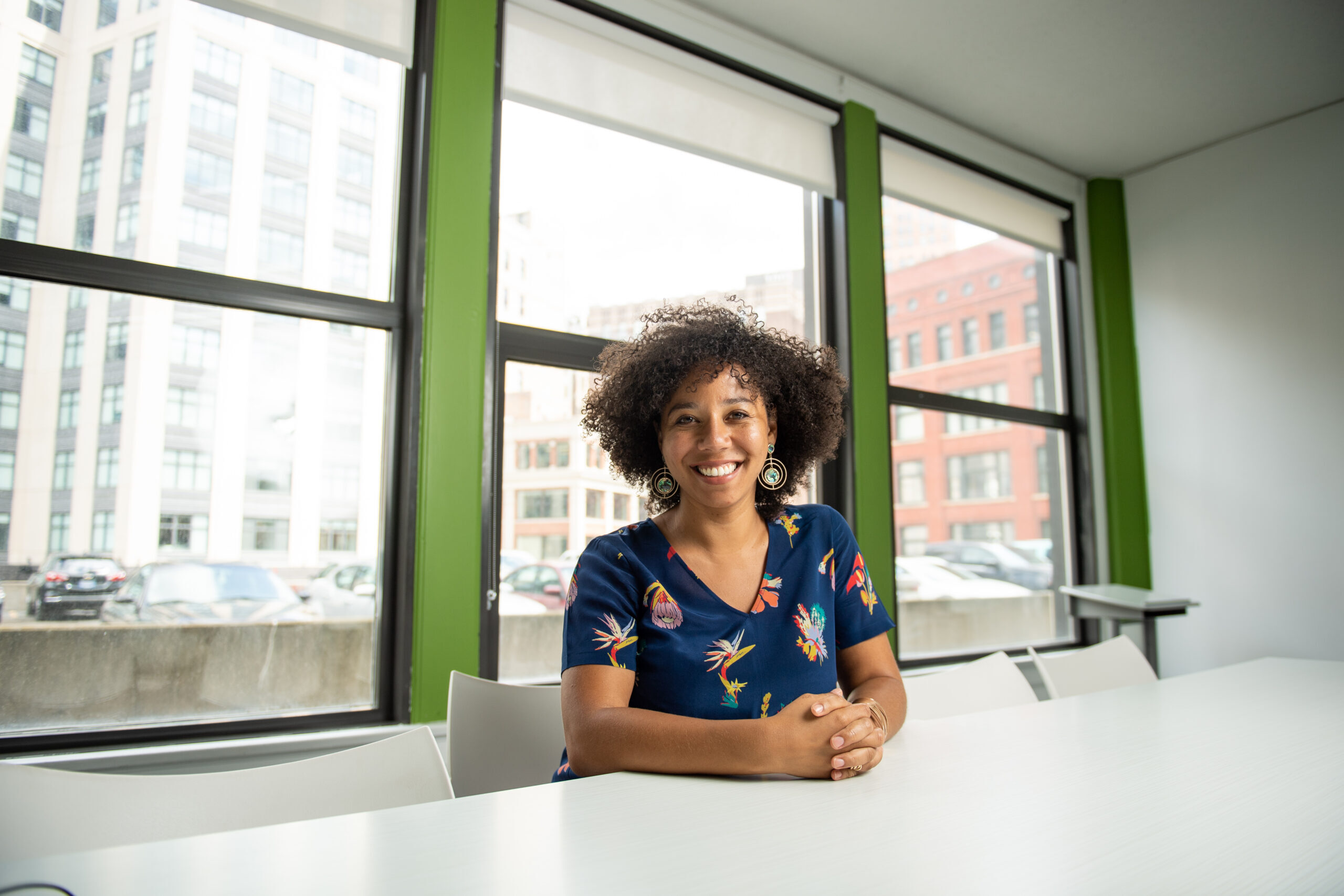 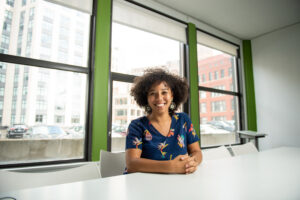 Amanda Alexander, a senior research scholar with the University of Michigan Law School, opened the Detroit Justice Center in 2018 to end mass incarceration. The center, which plans a move to the Love Building near downtown next year, now has 25 staff who help clients with a host of issues from driver’s license suspensions to removing legal barriers to economic independence.

A Michigan native, she was born in Southfield and grew up near Kalamazoo before venturing off to see the world. She received her law degree from Yale Law School, her Ph.D. in international history from Columbia University, and her B.A. from Harvard College. She has worked at the intersection of racial justice and community development in Detroit, New York, and South Africa for two decades.

At the U-M Law School she has taught Law & Social Movements and was an attorney in the Child Advocacy Law Clinic.

Q: My first question goes around the body of work that you’ve done with the Detroit Justice Center. What do you think are some of the most critical needs around mass incarceration and related issues in Detroit.

Alexander: The past three and a half years of running the Detroit Justice Center have really driven home the importance of putting questions of incarceration front and center when we’re thinking about the future of the city. I founded DJC on the belief that we cannot build cities that work for everyone–we can’t build a Detroit for everyone–without addressing the impacts of mass incarceration.

One of the things we’ve focused on at DJC is ending the traffic enforcement-to-jail pipeline. For many of our clients, the way it works is that they’re pulled over for a broken tail light, perhaps, and they get a ticket that they can’t afford to pay. Their driver’s license might be suspended due to failing to pay the ticket and associated fines and fees. And yet they have no choice but to keep driving on the suspended license because they have to drive to work (to make a living and, now, to pay down the court debt). And things keep snowballing from there. If they miss a court date, they get a warrant for failure to appear. We’ve seen this cycle lead to thousands of dollars of debt in fines, fees, and costs. And the warrants make it impossible for people to pass a background check. And people are living under the stress of possible jail time if they’re picked up, which could mean losing their housing or even their children.

We support individual clients who are dealing with this. Our clients come to us with outstanding warrants and court debt, and our attorneys fight hard to resolve their matters in court and help them get their licenses back. But for us, it’s not enough just to serve individuals. We’re always looking upstream and asking, what is the structural issue here? Who’s benefiting from this system? What underlying systems and policies need to change?

I served on the Governor’s Jail and Pretrial Incarceration Task Force, which looked at why Michigan’s jails are so full and ways to cut jail populations. We found that traffic offenses accounted for half of all the cases in Michigan’s criminal courts, and that driving without a valid license was the third most common reason people went to jail in Michigan. Which means we do a really effective job of criminalizing poverty in this state and making life hard for poor folks, especially low-income Black drivers. Fortunately, one outcome of the Task Force–and of people coming out to share their stories with us and demanding change–was a change in the law that took effect in October. The new laws end license suspensions because of unpaid tickets or court costs, and more than 220,000 Michiganders are now eligible to have their licenses restored. That was a big win. Now our attorneys are working hard to make sure the law is fully implemented and that people actually get their licenses back.

The DJC team and our partners also fought hard for Clean Slate expungement legislation, which expanded eligibility and access for people with criminal records to clear their records and move forward with their lives with fewer barriers to employment and housing. We are also involved in the fight around cash bail reform. Those are some of the systemic issues that my team has been tackling.

Q:  Your team of attorneys, how many staff attorneys do you have or do you work with a network of local attorneys who volunteer, do pro bono work on your behalf, or how does that all work?

We have three community legal advocates, and a number of staff attorneys, paralegals, and legal support staff. Our Economic Equity attorneys support Detroiters who are looking to start worker-owned cooperative businesses, community land trusts, or other community-led development projects. We also have program managers who lead our restorative justice and community reinvestment work. Sometimes we have pro bono assistance from local law firms, and we always have interns and externs. We have had Michigan Law students, Semester in Detroit students, and students from other parts of U of M intern with us, or join us for the summer through our Movement Lawyering internship program.

Q: Where did you grow up and what inspired you to do this work?

Alexander: I was born in Southfield and grew up in west Michigan. I lived outside of Michigan for 12 years. I was in South Africa, New York, up and down the East Coast for law school and grad school. When I finished law school in 2013, I wanted to move back home to Michigan, and I came to serve families like mine that had been divided by incarceration.

I started my career as an attorney by launching the Prison and Family Justice Project at University of Michigan Law School. I was representing incarcerated parents who had children in foster care proceedings–families who were at risk of permanent legal separation because a parent was sentenced to a prison term. That felt like very defensive work–this last ditch effort to hold families together after the prison and foster care systems had collided on them.

At the same time, I was also working at the Detroit Center for Family Advocacy, which was another Michigan Law School project. I was representing clients there who were facing difficulties getting CPS out of their lives and keeping their kids because of things like traffic-related warrants.That really drove home the ways that these legal barriers were keeping people trapped in poverty and shut out of the future of the city.

That was also the time, in 2014 and 2015, when the Movement for Black Lives was really getting going. I was part of coordinating legal defense for protestors in Detroit, and was also part of the Law for Black Lives national steering committee. At that moment, many of us were asking ourselves: how could we, as lawyers, match the power and energy of activists who were taking to the streets? And what did we need to rethink in terms of how lawyers are trained to show up, so that we could effectively support movement building?

The other thing was just seeing all of the incredibly visionary work happening in Detroit by longtime Detroiters. It was frustrating seeing the ways that these longstanding contributions to the city weren’t being valued–and not only that, they were being pushed out. People who had been doing urban farming, for instance. When grocery stores left the city, people didn’t want to leave and so they had to figure out how to feed themselves and how to build resilient local food systems. Suddenly, their land was valuable to developers in a way that it hadn’t been before. There was a need for legal support in certain cases to really shore up all of the visionary work that Detroiters had been doing–helping them hold onto their land and create community land trusts, for example–and to make sure that long-time Detroiters who had contributed to the city for so long were actually able to stay.

Then it was in 2018 that it was really time to open our doors at DJC, after five years of listening and relationship building. That was key. It was about doing the work and building the community that would become DJC first, and only creating the institution with the four walls to hold us after the relationships were already there.

Q: What would you say right now has been the impact of your work? I know there’s more to come, but just at this point in time.

Alexander: A few things. Every time I hear about a father who’s come back from prison who is able to reconnect with his family and get a job and housing–those individual client stories are always the most powerful for me and always front and center.

We’ve also had a lot of systemic advocacy success as well, which has been powerful–around issues including tax foreclosure, criminal record expungement, and driver’s license suspensions. For our team, it’s important to not only focus on impacting individuals, but to look at the root causes of problems and say, “Okay, this is a problem that impacts hundreds of thousands of people in this state. How can we solve this in a really deep way?” That has felt significant to me.

We have also helped our clients create Detroit’s first three community land trusts, and to launch worker-owned cooperative businesses. That’s work that gets at the heart of shifting us away from capitalist extraction and toward a sustainable economy built on stability and well-being for everyone. It’s an honor to be able to support community-led visions for housing or community solar or cultural spaces–and to help them fight displacement and keep their neighborhood affordable for generations to come.

One other big thing is the role of imagination. That is really important to us. I think that part of our power as an organization has been helping people to imagine what it would mean to live in safe, healthy, thriving communities and what we have to do to get there. Toward that end, we just launched a podcast called Freedom Dreams where we are elevating the work of people in Detroit and across the country. Our tagline is “We believe another world is possible, and we’re talking to the people who are building it.” We’re talking, for instance, to our clients at Oakland Avenue Urban Farm who are building a community land trust and cooperative corridor in the North End. We’re talking to the founders of the James and Grace Lee Boggs School about place-based and community-oriented education.

Q: Speaking of place, the center is moving next year to the Love Building in the Core City neighborhood. Tell us about that.

Alexander: We’re so excited about our new headquarters. We’ve designed it with universal access in mind from the start, so it will be the most accessible building in the city from a disability justice perspective. It’s going to be a hub for social justice organizations–we’re moving in with partners like Detroit Disability Power, Allied Media Projects, Detroit Community Technology Project, Paradise Natural Foods, and others. We’re excited to be able to have all of these organizations that work for justice under one roof. And it’s been great working with a neighborhood advisory council of Core City residents to shape plans for the Love Building and the programs that’ll happen there.

It’s just a few blocks away from the Lawton Parole Office. I really see it as a way to help welcome people back home when they’re coming back from prison, and to have a place right there where they can access our legal services and everything in the building. We’re very excited.