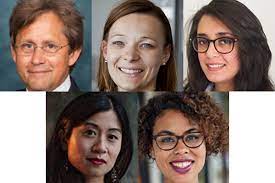 Donald R. Kinder, a political science, psychology and research professor who is widely recognized as a giant of behavioral political science and the most distinguished public opinion scholar of his generation, has been selected as the University of Michigan’s 2022 Henry Russel Lecturer.

The lectureship was announced at the July 15 Board of Regents meeting. Kinder will deliver his lecture in the winter term of 2022.

The Henry Russel Lectureship is the university’s highest honor for senior members of its active faculty. It is awarded annually to a faculty member with exceptional achievements in research, scholarship or creative endeavors, as well as an outstanding record of distinguished teaching, mentoring and service to U-M and the wider community.

Also at the meeting, it was announced that four faculty members will receive Henry Russel Awards, the university’s highest honor for faculty members at the early to mid-career stages of their careers.

Kinder is the Philip E. Converse Distinguished University Professor of Political Science, professor of political science and of psychology in LSA, and research professor in the Center for Political Studies at the Institute for Social Research.

He has played a leading role in almost every major development in the field of public opinion research over the past four decades. In all his work, Kinder places his arguments on firm psychological foundations and tethers his studies to the rich contours of political discourse as encountered by citizens in the “real world.”

In his seminal book, “News that Matters,” published in 1987, he demonstrated the power of television news to shift public priorities and to shape the criteria by which voters evaluate politicians.

His research has established that the way politicians and journalists frame an issue can shape how people organize an understanding of an event in memory. This study changed how social scientists understand the role of media in politics.

Kinder’s 1996 book, “Divided by Color,” made an equally significant contribution to the study of racial attitudes and politics. He advanced a powerful new theory of contemporary prejudice that explained how a fusion of anti-Black sentiment and conservative values forge what has come to be known as “racial resentment” and is understood to be one of the strongest and most consistent forces shaping American public opinion. The measures he developed for this study are now routinely used by social scientists around the world.

Kinder extended this work in another pioneering study, “Us Against Them,” published in 2009, in which he demonstrated how popular predispositions to broader forms of group-based thinking operate, which transcend prejudices toward specific groups and see society in terms of favored in-groups and shunned out-groups.

Kinder joined U-M in 1981. He was elected to the American Academy of Arts and Sciences in 1993 and the National Academy of Sciences in 2017, and the American Political Science Association honored him with the Warren E. Miller Award for lifetime achievement in the study of public opinion and elections in 2012.

Daly is nationally recognized as a rising leader in mechanical engineering design and engineering education research. She has developed new strategies that center creativity and diversity of ideas in generating design concepts, and that incorporate people and their social and cultural contexts into engineering problem solving.

In 2020, the College of Engineering honored her with the Monroe-Brown Foundation Education Excellence Award for her excellence in curricular development, instruction, and guidance at both the undergraduate and graduate levels.

Mehdipanah has established herself as a world leader in research on urban health equity. Her influential work examines the impacts of socio-economic conditions, built environment, policies and governance on the health of individuals and communities.

She joined U-M in 2015 and has forged deep partnerships with Detroit community-based organizations and leaders. Working with the longstanding Detroit Healthy Environments Partnership, she conducted the first application in the country of the World Health Organization’s Urban Health Equity Assessment and Response Tool to identify specific social determinants of health that affect different areas of the city.

Mehdipanah’s research contributions have direct impact on shaping the equity of policies that affect the health and well-being of city residents.

Ng is an international leader in carillon who inspires students, faculty colleagues, composers, musicians and audiences around the world with her commitment to reimagining, enlarging and diversifying the repertoire for carillon.

Ng has been with U-M since 2015. She has given recitals throughout North America, Europe and Australia, and is the most active performer of electroacoustic carillon music in North America.

Through her editing and publication of musical scores, Ng has sparked a global movement to diversify carillon repertoire. A passionate advocate of new music, she has commissioned and premiered 60 new works, including the first commissioned carillon works by Black men and women, and much of the world’s electroacoustic carillon repertoire by women composers.

Simmons, an innovative historian and teacher of race and gender, has done groundbreaking research that has opened new understandings of the histories of African American girls and women in 20th century United States and has established herself as one of the top scholars in her field.

She came to U-M in 2017 after receiving her Ph.D. in history and women’s studies at U-M. Her foundational 2015 book, “Crescent City Girls: The Lives of Young Black Women in Segregated New Orleans,” blends cultural studies and social history to explore how segregation shaped the lives of Black girls in New Orleans.

She has recently been named to the editorial board of The Journal of American History, the top journal in the field.