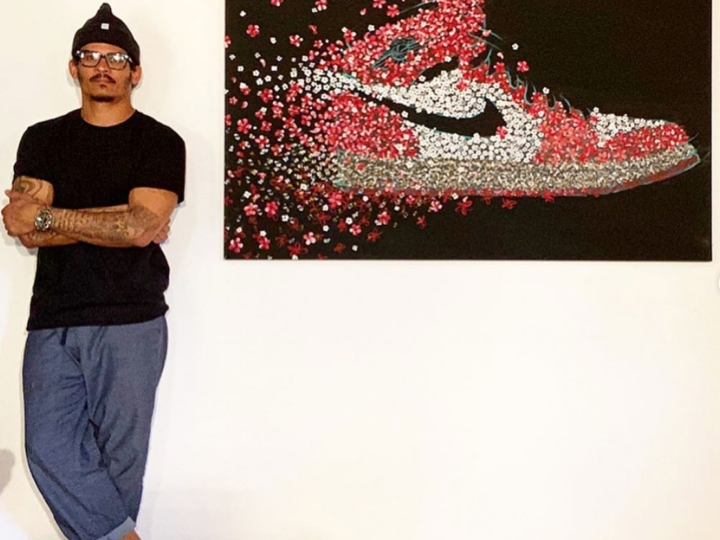 If the shoe fits…

Painting an abstract AJ-1 helped shoe designer and ‘Adidas man’ Shane Ward, BFA ’96, claim his power – and his grace – as an artist, apprentice, and African American man in 2020. 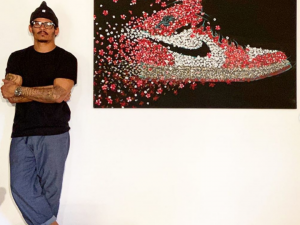 Painting an abstract AJ-1 helped shoe designer and ‘Adidas man’ Shane Ward, BFA ’96, claim his power – and his grace – as an artist, apprentice, and African American man in 2020.

Shane Ward, BFA ’96, paints a beautiful picture as he describes quarantine in upstate New York. Each morning before working from home, the men’s shoe designer takes time to meditate. He reads, he writes, and he sketches something new.

“I do well alone,” he says. “I love to be reflective and introspective.”

Determined to control the open-ended narrative of his personal lockdown, Ward has spent his time revisiting hobbies and passions that long lay dormant, including painting. It’s his way to keep the stress of COVID-19 at bay while discovering more about himself.

“My goal was to be proud of how I handled myself [during the lockdown],” he says.

Ward is the creative director at G-III Apparel Group where he oversees footwear for the Bass Weejuns, DKNY Men’s, and G.H. Bass brands. From 2003-14 he was co-founder and creative director of his own shoe line, DETNY by Shane & Shawn (his identical twin).

Ward has lived in NYC for 19 years, but hasn’t set foot in his one-bedroom apartment on the Lower East Side for more than three months. A native Detroiter, he says, “I don’t even miss the city; it’s weird.” 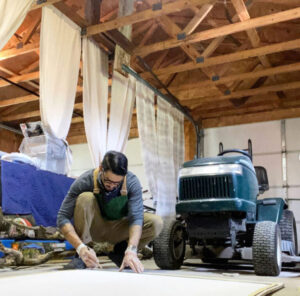 “When I decided to take the leap of faith and be brave by diving into the creative expression of painting, I did not know where it would take me,” Ward says. (Courtesy image)

He toiled many weekends rehabbing his farmhouse (rebuilding from the studs up), hoping one day to retire to the country and paint. The greenspace was working its magic on his creativity this spring; his daily sketches included abstract imagery, engineering designs, and spatial concepts. As he prepared to paint for the first time in two decades, he narrowed his vision to footwear and blossoms.

Everything changed on Memorial Day with the videotaped murder of the unarmed African American man, George Floyd, by white police officers in Minneapolis. Police brutality wiped COVID-19 off the front page. Activists and protestors took to the streets as news outlets played and replayed the killing ad nauseum.

The senseless deaths of Ahmaud Arbery (Feb. 23) and Breonna Taylor (March 13) already weighed heavily on Ward’s heart. This time he felt something shift. The shy, straight-A version of himself — the one who grew up in Detroit feeling unsafe, who followed every rule, who hid his shame about being on government assistance — took up residence in his adult brain.

Suddenly his idyllic safe haven was a soul-crushing prison. Visceral memories of crime, poverty, injustice, and interactions with Detroit police resurfaced with a vengeance. Ward stopped sleeping. He cried in therapy. He refused to watch the Floyd video.

“The police found ways to create scars that are still there,” he says of feelings he’d long compartmentalized. “I’m up here in the country in my place of solitude. But it’s also a rural area and there are not many black people here. I’ve seen a couple of Confederate flags. Now it’s putting me in a headspace where I’m thinking I can’t go on a bike ride by myself.

“As a black man, the fear is ever-present. I’m living it every day.”

His white friends are starting to ask him about it, he says, but can they really grasp the stress?

“I have no words to express what I really feel at my core,” Ward says.

But he did have brushes, canvas, and paint.

TAKE A WALK IN THIS NIKE

Painting a shoe made sense, and he decided there should be some type of imagery that would be soft and emotionally soothing. 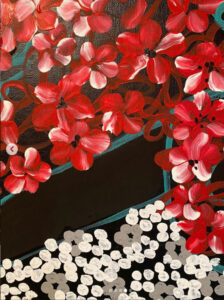 “Michael Jordan is a gift. One that represents the extreme contrasts — with his relentless pursuit of greatness while doing it in such a manner that is aesthetically graceful,” Ward says. (Courtesy image)

“I kept coming back to cherry blossoms,” he says. “I travel to Japan a lot. I wear a lot of Japanese designers. I enjoy the internal response I have to the beauty of that petal and I wanted to experience it.”

The act of putting brush to canvas reminded him that drawing was the one thing that made him feel safe growing up. His art brought him confidence and friends who found it cool that he could sketch athletes on demand. Of course, they all were obsessed with Michael Jordan and the original Air Jordan 1, designed by Peter Moore for Nike. The shoe, like Jordan himself, was instantly iconic.

“Jordan was such a force; I had never seen someone play with that type of aggression,” Ward says. “He was someone you could emulate — you could stick your tongue out when you played basketball — and he had his name on a shoe! Like, you could actually go into a store and buy that athlete’s energy.”

The Nike shoe had a simple design, but it created instant controversy. The NBA banned the black/red version of the sneaker because it violated the league’s uniform policy. That just made the shoe more desirable. But the Ward twins could only afford the knockoff version.

When Ward started to sketch an AJ1 covered in cherry blossoms this spring he knew he was moving the needle for himself. He googled to make sure his concept didn’t exist already. “It felt so right before I even put it to canvas.”

In “AJ1-Blossomed,” dainty petals float from a weightless sneaker on a 40” x 60” canvas. The juxtaposition of the ethereal flower against the masculine shoe is striking.

“We all attach to certain things because they are cool in the moment,” Ward says, reflecting on the short but precious lifespan of a cherry blossom, not to mention a sneaker. “So many things come and go, especially in sports and entertainment. But Jordan and his legacy will stick around forever.” 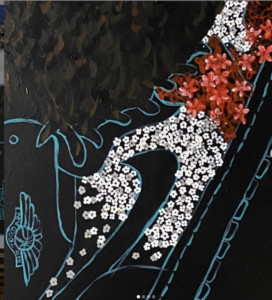 he painting is a tribute not only to Jordan’s legacy, but to that of his mentor and designer of the original Air Jordan 1, Peter Moore. (Courtesy image)

By the time the AJ2 came out, Ward and his twin were caddies at the Detroit Golf Club, where they raised enough cash so each could buy an authentic pair. As caddies and good students, the brothers qualified for full tuition, room, and board at U-M through the Evans Scholars Foundation. Ward attended the Stamps School of Art & Design; his brother went to the College of Engineering.

At U-M, Ward felt safe for the first time in his life. “I remember riding my bike and feeling so grateful to be there,” he says. “I learned so much coming from an all-black community and then my first roommate was a white guy, Jason Quisenberry. We are still great friends.”

The artist’s first gig after college took him to Portland, Ore., where he worked at Adidas under the very same Peter Moore who designed the first two Air Jordans for Nike. (Moore also designed the Air Jordan wings logo and the Jumpman logo.)

Ward worked in Moore’s Adidas studio from 1996-2000. It was kind of a miracle that “a poor kid from Detroit who loved to draw” could make a living designing shoes, he thought. Moore became a mentor and they remain close friends. “AJ1-Blossomed” was a way to honor Moore’s influence on his life, says Ward.

“Peter was a champion of design who would stand up for the creative process to marketing and sales,” he says. “I’ve always respected Peter from a design theory, leadership, and creative direction standpoint, but also from a humanity standpoint.”

The Adidas footwear design studio at that time was the most diverse studio in the industry, Ward says. It’s one reason he has a sense of “antiquated loyalty” to the brand and his mentor. He’ll paint a Nike but he hasn’t worn one in more than 25 years.

At Adidas, Ward helped revive the Adidas Academy by recruiting students from inner-city schools to attend design workshops in the studio. He hopes to do something similar at G-III when coronavirus is safely contained. 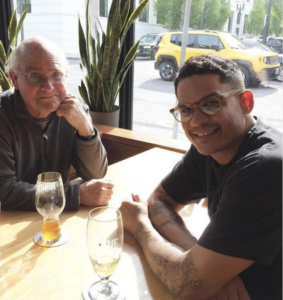 Ward remains close friends with mentor Peter Moore to this day. “AJ1-Blossomed” is a tribute as much to Moore as it is to Jordan. (Courtesy image)

Meanwhile, though he had planned to produce a series of “shoe paintings,” Ward has decided to paint through the latent trauma triggered by George Floyd’s murder.

“I think it will connect with the shared experience of other black men and women,” he says. “These are things I haven’t talked about in years because as a black man you’re just trying to forge ahead and be the best version of yourself every day — and not have these incidents hold you back.”

Safe to say, Ward has that angle covered. And things are looking up in the country. His mostly white rural town just held its first small but mighty Black Lives Matter event.