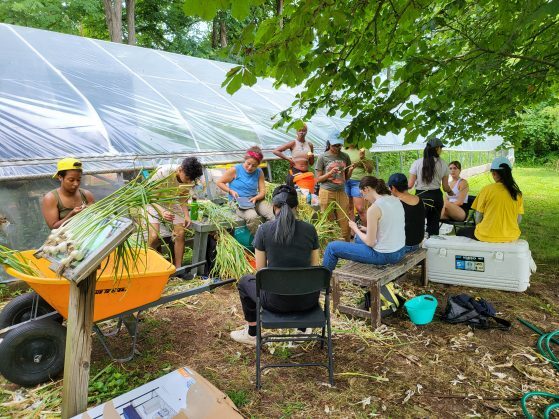 Students process fresh garlic at D-Town Farm during a cohort day in July. 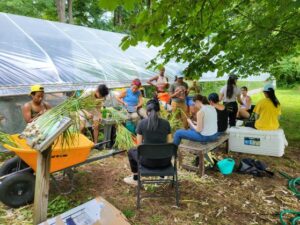 Students process fresh garlic at D-Town Farm during a cohort day in July.

Since 2009, Semester in Detroit has offered students a completely immersive experience studying, living and working in the city for an entire semester. The goal is not only to foster a greater understanding of Detroit, but also to encourage students to learn from and build relationships with long-time community members while contributing to the causes of partner organizations focused in food accessibility, education and youth development, environmental justice and more.

The program is offered during the fall, spring and summer semesters. Interested students can check the Semester in Detroit website and begin the registration process for 2023 programs in September.

“The program was created by U of M students,” said Craig Regester, associate director and lecturer for Semester in Detroit.

As part of her Urban Studies course with Stephen Ward, Rachael Tanner proposed the first concept of the Semester in Detroit program in 2006. Ward encouraged her to make the proposal a reality, and she joined forces with other students in her class to do just that. The program became funded by the provost’s office in 2008, and since then the core model has remained consistent even today.

“Students live in the city, learn in the city, work in the city, and therefore engage with the city in a multi-dimensional way,” said Regester, just as Tanner outlined it back in 2006.

Some of these organizations include the Detroit Black Community Food Security Network, Detroit is Different, General Baker Institute, and Soulardarity.

Another important change is the fact that Semester in Detroit has begun to open itself up to the Dearborn and Flint campuses. “Our classes are the only classes on any of the three campuses where undergraduate students are in the same classroom. And I think there should be  more of that,” Regester said. “I think for many different reasons, building cross campus partnerships with our sister campuses in Flint and Dearborn, not just because of what our program can do for their students, but because of what their faculty and students contribute in bringing into our program.”

Neil Kagerer, a UM-Flint student who recently completed the program, said students from different campuses learn and live together, engaging regularly in all facets of life.

“Everyone brought different perspectives and backgrounds to the program,” Kagerer said. “A lot of times in classrooms we had to talk about our own beliefs and opinions on issues we discussed.”

The program also exposes students to the world of non-profit and community-based work as a profession. Alana Burke, recent U-M graduate and alum of SiD, explains that having the opportunity to work closely with the community through her internship completely changed her career aspirations.  Burke had originally been considering a masters in public health, but was struggling to find a way to connect it to her interest in food security.

“But after I did Semester in Detroit and worked with D-Town farms, that made me want to focus my time more so doing work within the community on the ground rather than going the academia route,” she said. Burke has now joined D-Town farms as an employee, and has also been working with the General Baker Institute, a movement incubator she was introduced to through SiD.

An important aspect of the program is the way in which students are given the opportunity to apply the skills they learn in class to their real-world experiences of living and working in Detroit. “You’re able to take what you’re learning at your internship along with what’s in the classes, and just apply them in both areas,” Burke said.

Beyond the skills of community engagement and activism that students gain in courses like “From Underground to Motown: A course on Detroit’s History” taught by Jamon Jordan, who earlier this year was named the city of Detroit’s first official historian, students also unlearn stigmas they held about the city of Detroit and learn how to approach communities that they don’t entirely understand.

“There are a lot of, you know, ideas about Detroit, a lot of negative images or stereotypes associated with the city.” said Burke, a Detroit native. “So people can come in with this mindset of, ‘this city that’s poor, and that it’s in ruin, and that we’ve got to do all of this to help,’ coming from the outside. But there are already people inside doing the work. So that goes along with respecting the people and the stuff that they’re already doing.”

Respect is an important aspect of the SiD curriculum, and a value that Regester hopes will serve students well beyond their time in Detroit.

“We really have to think about listening with as much attention and intention as we can as a part of working alongside and in partnership with communities,” he said. Students are encouraged to be mindful of their identities when entering a space they’re not from, and to always lead with a respect for the work that is already being done.

While Regester is modest about the impact Semester on Detroit has on the city itself, he emphasizes that the greatest impact comes in the form of the students who have learned how to respectfully enter communities and who have gained valuable listening skills. It’s the hope that these students can bring these skills wherever they might go, and continue to make meaningful change alongside with the true needs and desires of those the efforts are affecting most.