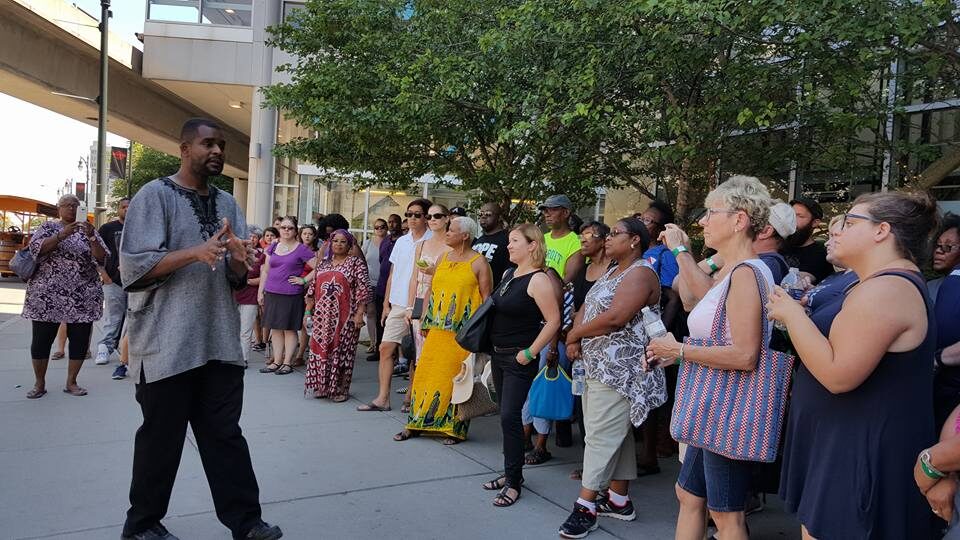 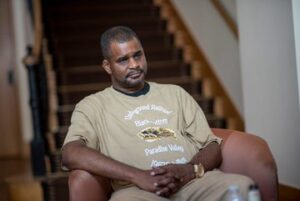 Jamon Jordan, U-M lecturer and historian for the city of Detroit.

Jamon Jordan, or Baba Jamon to his students, started educating people about the history of Detroit long before he was named the city’s first historian last October. An elementary and middle school teacher for 16 years, Jordan has strived to educate his students about history in a way that is inclusive and engaging. In 2013, Jordan founded the Black Scroll Network, which gives walking history tours to people looking to learn more about the history of Detroit. He also teaches a course in the University of Michigan’s Semester in Detroit Program, called “From the Underground to Motown: A Course on Detroit’s History.”

Does teaching children about the history of Detroit also help educate the adults in their lives and work to bring the community together?

Yes. In fact, this is probably partly how I got started. As a teacher, I took the students on field trips to these historic sites around the city of Detroit. Parents were sometimes chaperones, so they learned about these sites, and they were so interested in the history of their own communities that they hadn’t learned before, that they began to tell people. And that’s really how I ended up doing history tours.

Why do you think that many of these parents, and people of that generation might not know about the history of the city or their own neighborhood?

So part of it is no one’s fault. It’s just that It wasn’t known, it was obscure. Detroit’s history, some of it, has been put on the wayside because of powerful narratives around the country, like the civil rights movement in the South, the Montgomery bus boycott, the lunch counter sit ins, the fights for voting rights in Selma, and those kinds of stories, so that kind of pushed some of the Civil Rights stories that happened in Detroit to the corner, because those stories are so compelling.

And so that’s part of it, it just was missing. But then the other part is purposeful. There’s a purposeful removal of a lot of Michigan and Detroit’s history, too. And so that part is the part that we have to address.

Certain things might not be part of the curriculum because it’s about race, it’s about gender, it’s about the LGBT community, it’s about sexism. And so those things shouldn’t be taught because we always want to present the history of America, which, on the smaller level, the history of Michigan, the history of Detroit in a positive light, and we don’t want to talk about these negative parts of history. And there’s no way to talk about black history and the city of Detroit without talking about really unfortunate and negative parts of history. But my belief is that if you’re learning history and you’re only happy and proud about it and it never makes you upset, it never makes you angry, then you’re not learning history. There are things that are important that we ought to know, that make us angry, that make us upset, that makes us cry, that makes us sad, and that history ought to be taught as well.

How does your teaching influence the way you approach your role as historian of Detroit? And what were some of the goals that you hope to achieve for the position?

My teaching is based on people, places and events. So how I see my teaching, both when I was a K-12 teacher and teaching now at the U of M, is that I don’t want to be just in a class or in a book. That’s part of our class, of course we use a classroom and we use text, but overwhelmingly our class is going to the places where history happened, and talking to the people who were involved in that history. That is the overwhelming part of how I teach my class. Instead of four walls inside of a building being my classroom, my classroom is much larger. It is the whole city of Detroit. And so because I use the whole city of Detroit as my classroom, for people who take tours with me, for people who take my classes, for my students, that put me in a prime position to be the official historian for the city of Detroit. 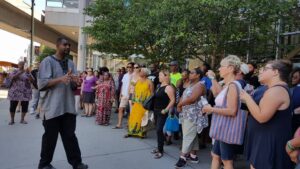 There’s so much more we can learn when we’re standing at the site where things happen. It’s one thing for me to tell you that people escaped to Detroit on the Underground Railroad. But it’s another thing for you to be standing at the riverfront, and you can look over and see another country, Canada. Once you see that, it makes it very clear why Detroit is highly important in the Underground Railroad, because you’re standing and you’re looking over and seeing another country, a country that ended slavery before the United States, and a country where the fugitive slave law of the United States doesn’t apply because it’s a separate, independent nation. Things become much more understandable as people go and visit the historic sites and learn more about the people, the places and events that make Detroit’s history.

You became a lecturer in the Semester in Detroit program at U-M in 2019. How did you become connected with the program? And what do you find inspiring or surprising about working with University of Michigan students and faculty?

Well, of course, I think it’s amazing. Teaching at the University of Michigan has really been a great experience, and I look forward to next semester where I’ll be teaching my class again. There are a few things that really are great about the program. Number one, working with other scholars at the University of Michigan, bringing in some of the historians, some of the other scholars from the U of M, who speak to my class when we’re on a topic that is really part of the expertise.

That’s important. But that’s not the most important thing. The most important thing about this class is the students. Students are living in the city of Detroit and learning about Detroit in other ways besides my class. My class is talking about history. But they’re living in the city of Detroit, and so they’re seeing Detroit right now, and what they’re seeing is the interplay of the history that they’re learning in my classes, with the present day Detroit that they’re living in. They’re interning with nonprofit organizations, and grassroots community organizations, so they’re learning about the challenges that Detroit faces through the lens of people who are trying to solve those issues.