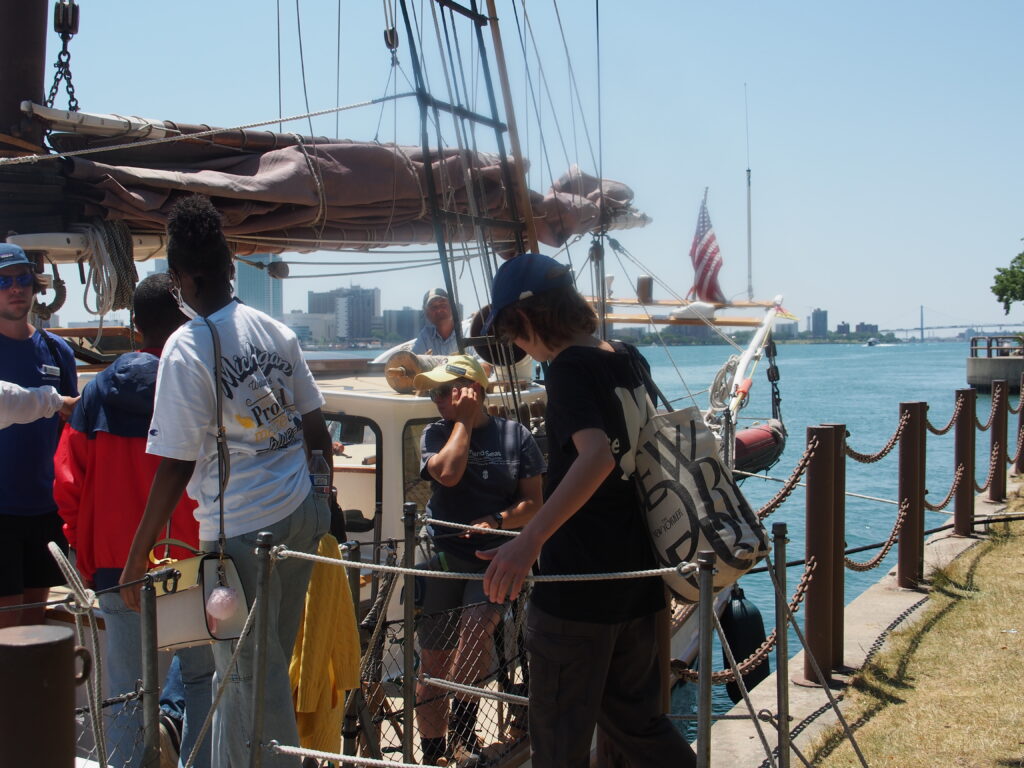 Power of Place: Transformational experiences on the Detroit River thanks to Skiff and Schooner Program 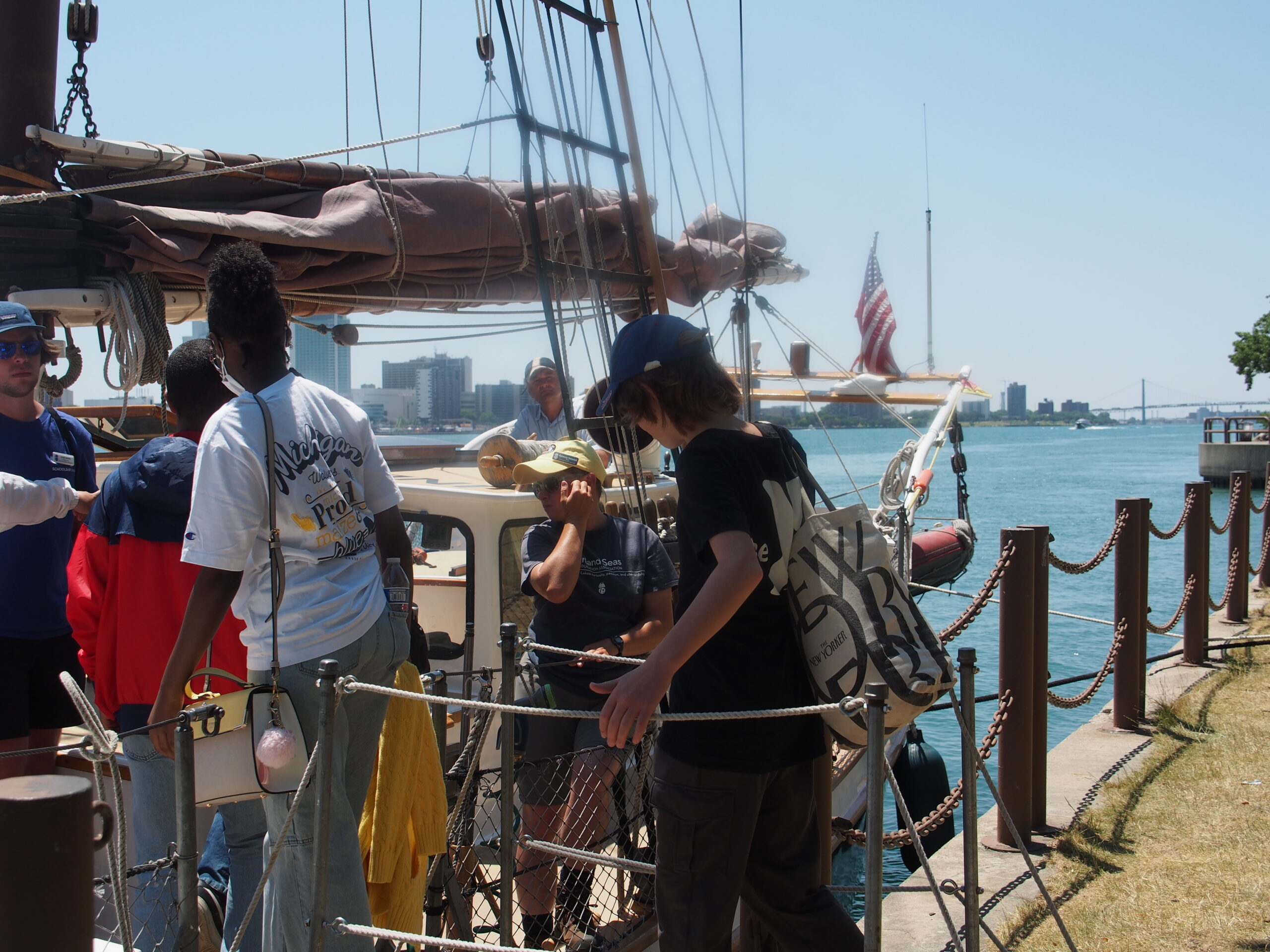 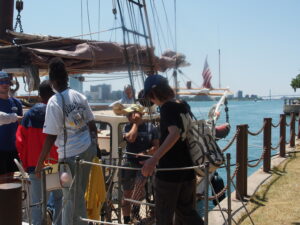 The waters were clear and blue the morning of the schooner outing, but students were still apprehensive. Some had never been on a boat before, and the sailing ship was an intimidating start to getting one’s sea legs.

The schooner outings are part of the Detroit River Skiff and Schooner Program, which was created by the University of Michigan’s Detroit River Story Lab in partnership with the Detroit Outdoor Adventure Center, the Green Door Initiative, and the Community Foundation for Southeast Michigan. On the outings students learn about what it takes to sail the boat, as well as about the river’s plant and animal life, the history surrounding the river, and much more.

It’s an unusual sight to see a schooner on the Detroit river, the boat looking like something from another time against the backdrop of a distant city skyline. Pronounced skoo-ner, this traditional tall ship has at least two masts, from which hang a number of sails. Immediately, the skeletal outline and billowing white sails inspire a sense of wonder and adventure. But can this counteract the fear of entering open waters?

“I’m a little nervous, but also excited,” says 12 year-old Valencia Oleksinski, who is joined at the outing by her father Jeff. “I don’t know what to expect.”

As the kids gather around to hear the safety presentation, a mixed-bag of reactions rise from the crowd. “What if I fall in?” one boy says. Kendall, 14, on the other hand, is excited. When asked what she’s looking forward to seeing on the outing, she says “a cute fish.”

It’s time to board, and the students begin filing on. The boat rocks beneath their feet, and they climb unsteadily below deck, taking the steep staircase facing forward as though it were a ladder. But already, you can see them coming to life with curiosity. The stove can move on wheels? The crew gets to sleep in bunk beds? The ship offers a playground for the imagination, a way of life so completely different than any they’ve known or envisioned before. 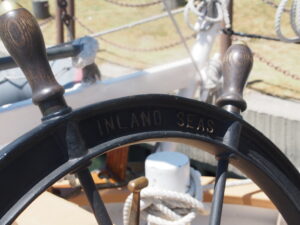 Deb Scott, educational volunteer with Inland Seas Education Association, reflects on the changes students undergo before and after their time on the schooner. “Generally kids come wide-eyed and overstimulated at first. Maybe a little concerned, because it’s such a new experience for them, being on a large boat with a lot of other people,” Scott says. “By the end we hope that they’re asking a lot of questions. We hope that they’re engaged. We hope that there’s interaction between the instructor and the participants. And we hope that they have one of the best educational experiences they’ve ever had.”

The project was a natural progression of the efforts currently underway along the river to educate residents about its importance and history.

“The impetus was the discovery of lots of organizations along the river corridor that seemed to have this quite striking mission of wanting to elevate the stories of their region and make them more accessible to students,” says David Porter, professor of English and comparative literature at U-M and founder of the Detroit River Story Lab. “There’s a lot of interest in providing experiential opportunities on and with the river.”

The Detroit River Story Lab harnessed this interest and joined the resources of these various organizations to provide this experience to students in community groups such as Healthy Kids Inc,. Green Door Initiative, and U-M programs like Wolverine Pathways, which is the group onboard on this particular occasion. Wolverine Pathways is a free pre-college program available to students in Detroit, Southfield, Grand Rapids and Ypsilanti.

According to CaVar Reid, assistant director of College Success and Donor Engagement at U-M, community building is an important aspect of Wolverine Pathways’ work, which is part of what makes the schooner outings so appealing. Not only do students learn about various topics in relation to the river, they also work as a team to help the boat operate; they raise the sails, move amongst each other on the ship and learn how to best support one another’s learning and growth onboard and in such tight quarters.

“This is an opportunity [for students] to find their passion, develop leadership skills, experience their cities and build community,” Reid says. The operation of the boat creates a chance to practice community-building on a smaller scale, where students are tasked with overcoming their differences and working together for the good of everyone.

This is just one of the many skills students are able to practice on the outing. As Porter explains, place-based learning presents the opportunity for students to engage with material in a very active way.

“[There’s] a greater degree of connection with the material that’s being learned when it has some sense of being relevant to one’s own lived experience and the environments one is familiar with,” Porter says. “If you’re learning about stuff literally in your own backyard, you’re much more likely to pay attention and recognize how it is relevant to your life, your community, your friends, your future and so on. And that provides a powerful motivator to academic engagement over time which is very difficult to replicate in the more abstracted context of the classroom box.”

With that engagement comes the discovery of new passions and ideas.

“A student can see themselves as a scientist, local historian, or somebody who works on boats for that matter,” Porter says. 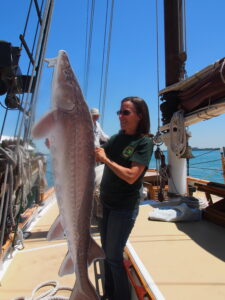 Michelle Serreyn, an educator with the Department of Natural Resources Outdoor Adventure Center, holds a model of a sturgeon, which can actually grow to be that size.

As the Schooner draws closer to land, you can see students milling about the deck like old pros. They chatter excitedly as they cross the small bridge between land and the boat. When asked what she enjoyed learning about the most, Valencia is quick to answer: “I like learning about the water filtration, how it goes through all these different substances to make it super clear and safe to drink.”

Other students were excited by the wildlife that they learned is returning to the river, the beaver and sturgeon and osprey of its past. And some were most enthusiastic about the operation of the boat itself. “Raising the sail was really cool,” Valencia says. “It was kind of hard, but we had so many different people doing it. When we all did it at once, it made it a lot easier.”

Porter hopes that in the future, the program can be opened up to allow more children the opportunity to learn from the river.

When asked what he hopes students take away from their time out on the river, Porter emphasizes the importance of the opportunity for new kinds of  appreciation and awareness: “We hope it  is an experience of wonder and joy and delight. Just being out there on the water, enjoying the bounty, the beauty of the river, can have a lastingly powerful effect in itself on people’s sense of connection with their place  in the world.”

As students climbed ashore and dispersed to head home and escape the heat of the day, it was impossible to deny that a connection had been forged out on the water. Not just to the river, but to the ancestry of the place that students live, and the people, animals and plants they share their community with. And this connection has the potential to turn every student into a steward and protector of the waters and its stories.