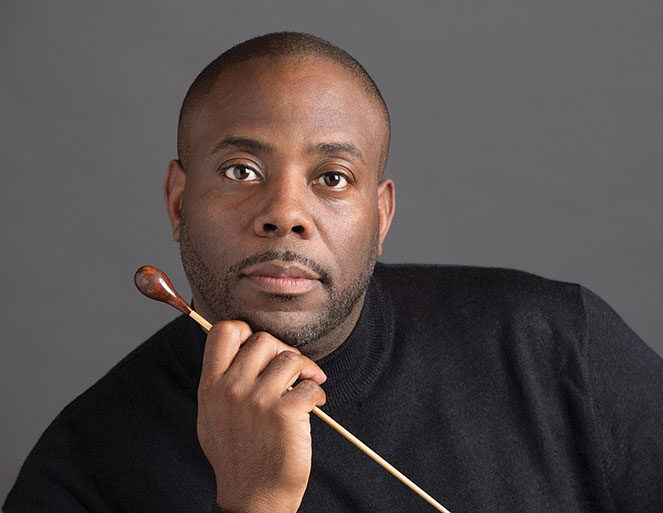 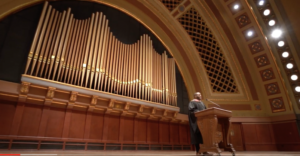 Damien Crutcher, MM ’96, gives the commencement speech at the U-M School of Music, Theater & Dance in 2021. He urged students to “prioritize people in everything you do.”

When Damien Crutcher fell in love with music, his whole world opened up. He’s passing on the gift of music to Detroit children as the director of Crescendo Detroit, which just celebrated 10 years. Crutcher also conducts the Farmington Community Band and the Detroit Symphony’s Community Concert Band.

How did you become a musician?

I was born and raised in the Detroit Public Schools, and I had a dynamic music teacher in elementary. In fifth grade, I started trumpet. I wasn’t a great trumpet player, and my teacher at Cass suggested that I play a different instrument. I was watching PBS and I saw an orchestra and I saw the French horn. The next day I said to him, “I want to play the instrument that they put their hand in the bill like this.” He got one out, and it turned my life upside down and inside out. So many avenues opened up for me.

How did you make your way to the University of Michigan for your master’s degree?

I got recruited to Michigan State for music education, and while I was there I started taking conducting lessons from a Black grad student. When I was teaching music at Oak Park, U-M was offering a one-week conducting camp and I went. H. Robert Reynolds, considered to be the greatest wind band conductor ever, recruited me to come study conducting and be his graduate assistant.

What led you to start Crescendo?

I did a lot of guest consulting at a lot of suburban schools. And I noticed that when I crossed Eight Mile, I didn’t see kids with instrument cases walking down the street. At that time, most of the schools in Detroit did not have music programs. So I decided to start Crescendo to make sure students had the opportunity to be in music. We started with 11 kids and have 50 now.

How has the program evolved?

We’re really committed to listening to the kid, parents, and community. DJing and music production was something people brought up and we added, and they’ve been wildly successful. We also have financial literacy, dance, vocal music, physical education, social emotional learning. We have two cooks, and at the end of every session we sit down with parents and kids and eat a full meal.

We’ve been at the Salvation Army at Chicago and Dexter for three years. If we have parents that have issues, they help us. They give us toys and coats for Christmas – they load us up!

How did your time at the University of Michigan shape who you are?

My time at Michigan was extra special. I learned that mentorship is especially important. Professor Reynolds has been a part of everything I’ve done since 1996. He contributes to Crescendo; he has guest conducted my community bands. When I taught high school, I mentored my kids the same way. Some of those students work with me at Crescendo Detroit. I had an amazing village and I still do.