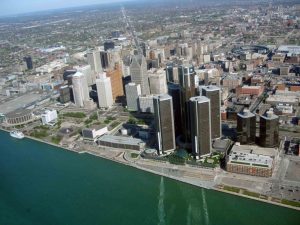 Efforts to control Lake Erie’s algae problem have largely focused on reducing the levels of the nutrient phosphorus entering western Lake Erie from the heavily agricultural Maumee River watershed. But the Detroit River carries about 80 percent of the water that enters Lake Erie and 21 percent of the algae-promoting phosphorus from both urban and agricultural sources in the U.S. and Canada. While the Detroit River is not a significant driver of harmful algal blooms, it is an important contributor to Lake Erie’s dead zone.

In 2015, U-M researchers at the Graham Sustainability Institute were awarded a $3 million grant from the Erb Family Foundation to determine the relative contributions of various phosphorus sources, both urban and agricultural, in the Detroit River watershed.

Preliminary data from the study indicate that the largest U.S. urban sources of phosphorus entering the Detroit River are municipal wastewater treatment plants. Of these, the city of Detroit’s plant is the largest, according to Branko Kerkez, U-M assistant professor of civil and environmental engineering. Among the U.S. urban sources, wastewater treatment plants are followed in magnitude by combined-sewer overflows and storm runoff, he said.

“Knowing the relative contribution of each urban phosphorus source can help provide information to stakeholders to maximize the impact of various intervention strategies,” Kerkez said.

Kerkez and colleagues are looking at how operation of Detroit’s existing stormwater-management system, which includes 18 large combined-sewer overflow basins that capture and hold stormwater, could be improved to reduce the amount of phosphorus entering the Detroit River.

In a separate project, Kerkez and colleagues have funding from the Great Lakes Protection Fund to develop smart, autonomous urban stormwater control systems. The study involves work in Ann Arbor, Toledo and Milwaukee. In Ann Arbor, sensors and valves are being installed throughout the city to measure and control stormwater during and after big storms.

“We’re retrofitting an existing system for real-time control of stormwater,” Kerkez said. “The water is captured in existing basins, and this system determines where and when that stormwater is released.”

“Toward the autonomous management of water quality through real-time sensing and control.” Kerkez, B. Presentation at 9:40 a.m. Wed., May 17, Room 252A.