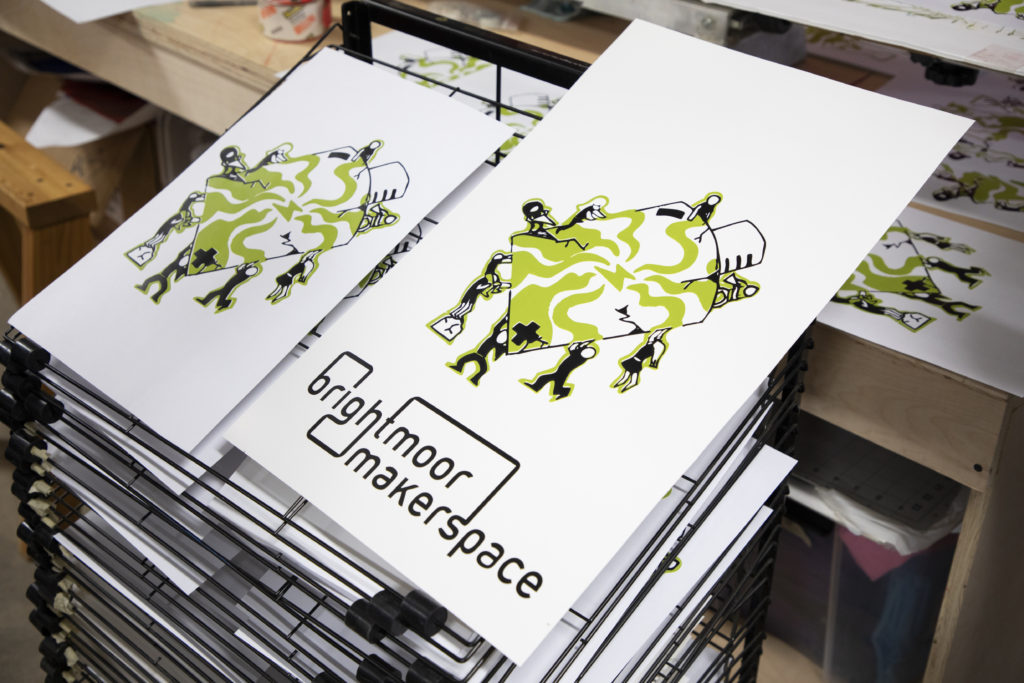 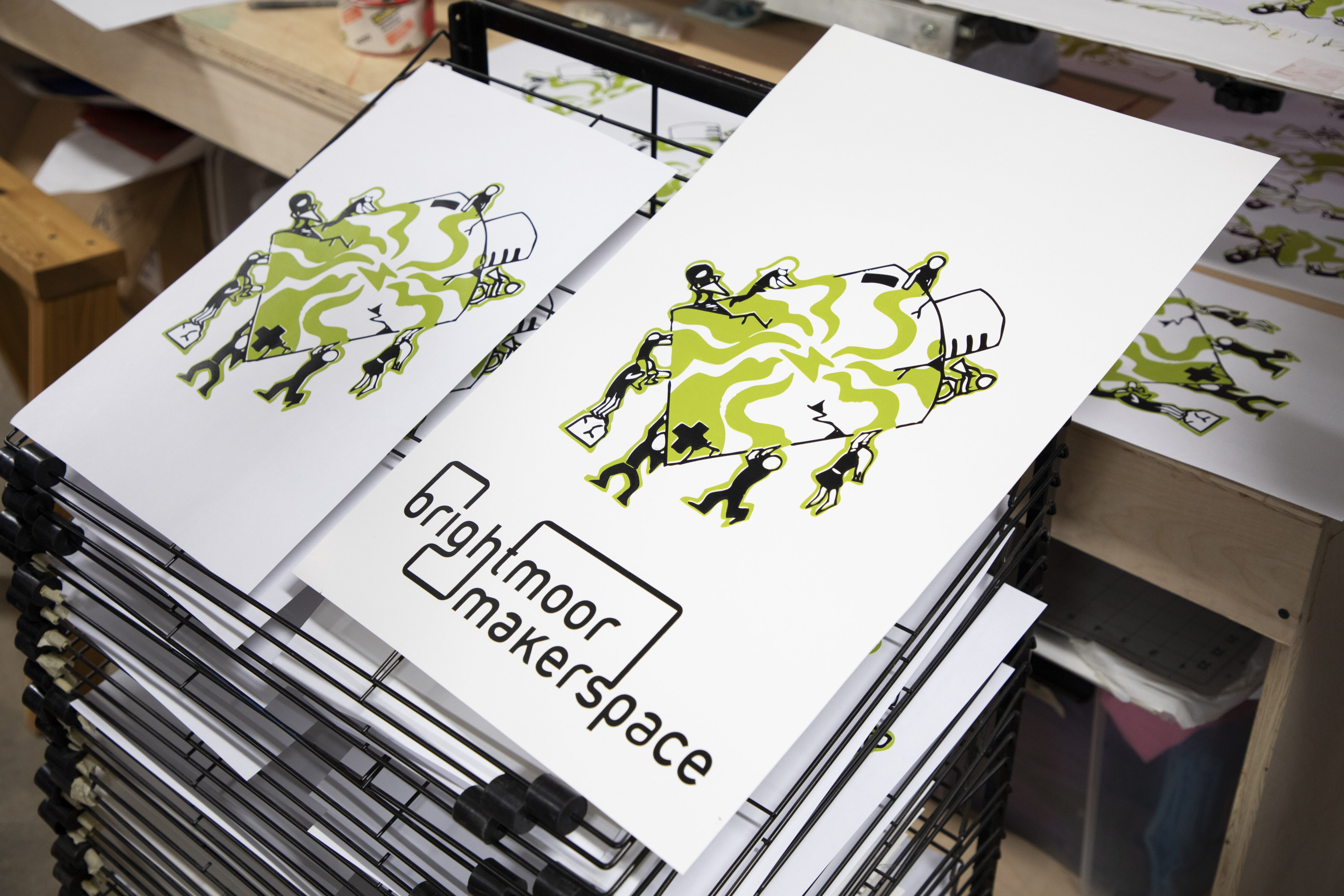 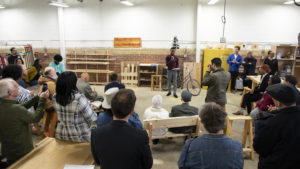 Detroit Community High School junior Diallo Carr welcomes visitors to the Brightmoor Maker Space on May 2. He is also the CEO of Ordinary Clothing, an apparel line incubated at the makerspace. Photo by Nick Beardslee/University of Michigan Stamps School of Art & Design.

Five years ago, it was just an idea—an empty building. Over the course of those last five years, that idea transformed into a hub for artists and makers in Detroit’s Brightmoor neighborhood.

More than 150 community members gathered to celebrate a year of “making” at the Brightmoor Maker Space last week. The Detroit Community Schools and the University of Michigan’s Penny W. Stamps School of Art & Design hosted the open house to celebrate its first academic year in operation.

The Brightmoor Maker Space is a 3,200-square-foot building on the campus of Detroit Community Schools that is resourced to help students learn, share knowledge and build entrepreneurial skills around the act of making. 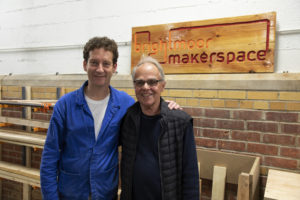 The outcome of a long-running partnership between DCS, the Sunbridge International Collaborative and the Penny W. Stamps School of Art & Design, the makerspace is the brainchild of Stamps professor Nick Tobier (left) and Bart Eddy, co-founder of DCS and Sunbridge International (right). Photo by Nick Beardslee/University of Michigan Stamps School of Art & Design.

“Nick makes us think about design differently,” said Stamps junior Justine Abbo. “He taught me how to follow the community’s lead and interests when it came to addressing a problem through design.”

Eddy believed firmly in an educational model designed to address the whole child—”head, heart and hands”—making him an ideal partner for Tobier.

For years, Change by Design students have worked with DCS students in the school’s woodshop, but Eddy and Tobier dreamed of something bigger—a makerspace with the goal of fostering a wider creative confidence in the lives of the surrounding Brightmoor community.

During the 2015-16 academic year, the Stamps School of Art & Design, Sunbridge International Collaborative and Detroit Community Schools spearheaded a fundraising campaign to renovate an outbuilding on the back of DCS’ 120,000-square-foot former industrial property.

The campaign was launched with a two-year, $100,000 matching grant from the John S. and James L. Knight Foundation’s Detroit Arts Challenge program and ultimately raised more than $200,000 through the chain of philanthropic giving that the match inspired. 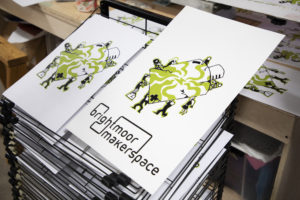 In 2015, 147 people stepped up to contribute a cumulative sum of $31,700 through a crowdfunding campaign held on Patronicity’s website as part of its Public Spaces, Community Places program.

Due to the successful online campaign, the Michigan Economic Development Corporation stepped up with a $25,000 contribution to help provide the rest of the money for the first, crucial Knight match of $50,000 to get the project started.

At the open house celebration, Tobier thanked all the many people who helped make the dream of the Brightmoor Maker Space into a reality.

“In the end, what matters is community. It is the people who show up for us,” he said.

Speaking of both the launch of the makerspace and of the spark he hopes to ignite in students, Eddy said: “If you can imagine it, you can make it. If you can dream it, you can build it.”

Diallo Carr, CEO of Ordinary Clothing, an apparel line incubated at the Brightmoor Maker Space, said his fondness for making started in the woodshop at Detroit Community High and blossomed into apparel design.

“This program has helped me be a better person,” he said. “I’ve realized what I’m passionate about and that you can do anything that you put your mind to.”

Marcus Lewis, a 2014 DCS graduate, was an active Brightmoor Maker throughout high school and has continued on as an instructor, working with Stamps alum Lyz Luidens (BFA ’13) to serve as coordinator for the space. For Lewis, the Brightmoor Maker Space having a building to call home is only the beginning.

“I want to see more students, new collaborations and new partnerships for the space,” Lewis said. “The biggest thing that the students bring into the space is fresh ideas—we need more of that.”