Stacey Stevens created the project in partnership with Yusef Bunchy Shakur, MSW ‘19, (right) who is the director of the Mama Akua Community House in Detroit, Zone 8, and Pedro Coracides, (left) an MSW student at Wayne State University. 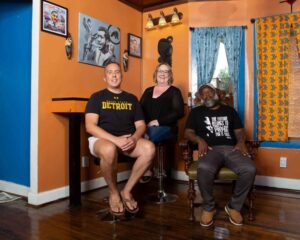 Stacey Stevens created the project in partnership with Yusef Bunchy Shakur, MSW ‘19, (right) who is the director of the Mama Akua Community House in Detroit, Zone 8, and Pedro Coracides, (left) an MSW student at Wayne State University.

Stevens created the project in partnership with Yusef Bunchy Shakur, MSW ‘19, who is the director of the Mama Akua Community House in Detroit, Zone 8, and Pedro Coracides, an MSW student at Wayne State University.

The project focuses on Zone 8, a predominantly Black neighborhood in Detroit, which takes its name from its zip code. Zone 8 experiences many of the inequalities that ravaged all of Detroit in the past decades — unemployment, addiction, persistent poverty, lack of affordable housing — in hyper-focused ways.

The high percentage of both empty apartments and rental properties make it difficult to foster a sense of community. Despite these many challenges, residents have fostered a sense of community out of survival. Many critical institutions, including local schools and grocery stores, have closed, which has made this community more vulnerable socially, politically and economically.

“This is a neighborhood that is under constant attack from gentrification from outsiders,” said Stevens. “It is only now with its proximity to Midtown and Downtown Detroit, that this neighborhood is being ‘valued’ and recolonized.”

According to project documentation, 48208 Lives seeks to “connect, develop and nurture emergent leadership from Zone 8 to create a racially and socially just vision for a revitalized Detroit without displacement or continued disinvestment.”

To do this, the project will develop an asset map, marking all the human resources available to residents. “We are hopeful that this project will lay a foundation for neighborhood residents to support their visions for a vibrant community,” said Stevens.

“One of the things I have learned thus far in our planning is how there is no one-size-fits-all approach to doing this work. I live about two miles away from the neighborhood we are working in. There is such a drastic difference in how my community looks and the resources most folks in my community have compared to Zone 8,” said Coracides. “I think that is the one thing I hope to learn through this work: what does it look like to replicate this work in different communities around Metro Detroit in light of the unique needs and resources available to each community?”

“The support will allow us to navigate some of the challenges on the ground and to meet our goal by connecting us with residents and positioning us to amplify their voices,” said Shakur. “As a graduate of the School of Social Work, this opportunity to work with like-valued people is inspiring. Developing a research framework that is resident-driven and working professionally in a team capacity doesn’t necessarily happen post graduation.”