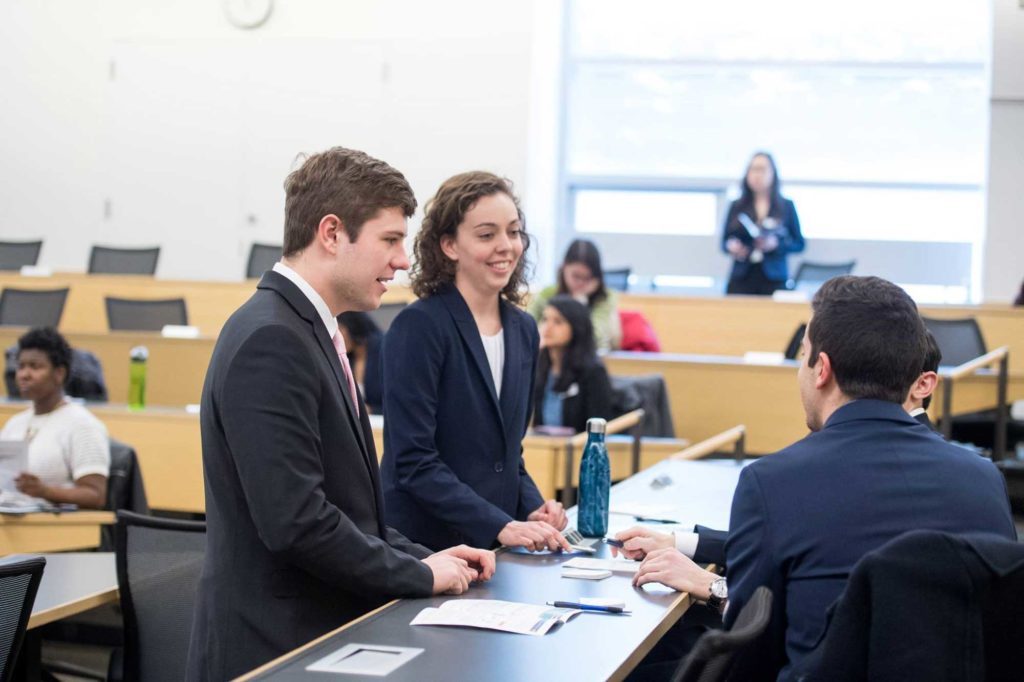 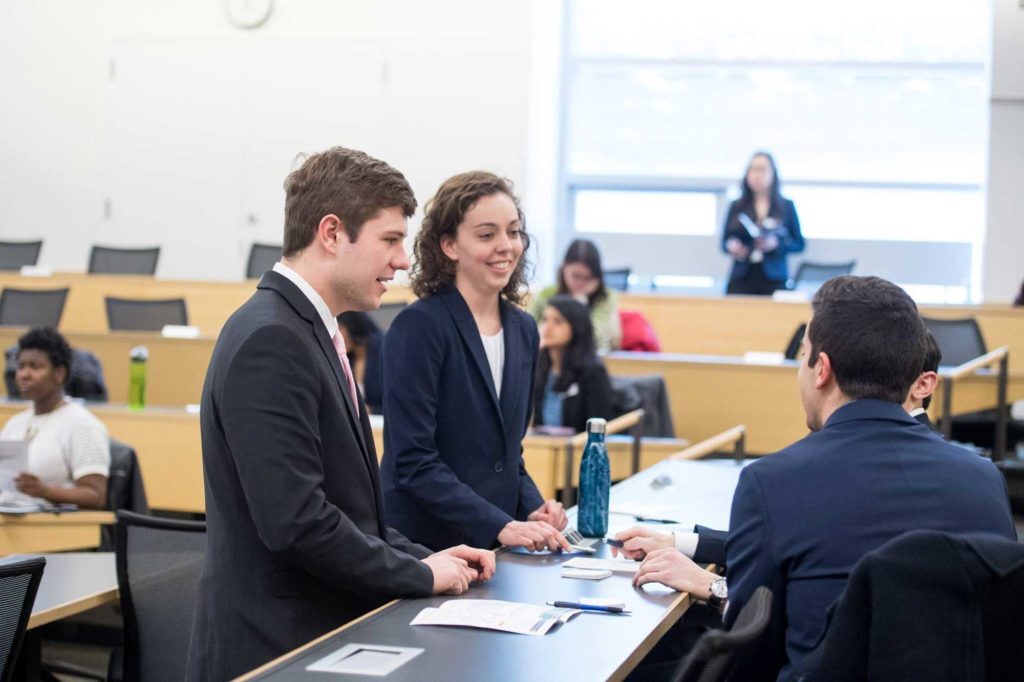 Nick Walsh, left, and Brie Riley, both juniors at the University of Michigan Ross School of Business, confer with other members of team Upstart during the Social Impact Challenge competition finals on Feb. 6, 2018. The team won $3,000 for their ideas to spur pop-up businesses in Detroit neighborhoods. Image credit: Michigan Photography 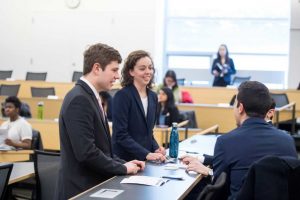 Nick Walsh, left, and Brie Riley, both juniors at the University of Michigan Ross School of Business, confer with other members of team Upstart during the Social Impact Challenge competition finals

The obstacles to bringing retail businesses to Detroit’s neighborhoods loom large from dollars to build out shop space to safety issues.

A Detroit Economic Growth Corp. plan to support entrepreneurs that are just getting started with short-term, low risk, pop-up opportunities got a boost from University of Michigan students who recently competed in the annual Social Impact Challenge.

The challenge, run by the Center for Social Impact at the Ross School of Business, provides graduate and undergraduate students across U-M an opportunity to collaborate and solve complex social issues in a competitive environment with real-world implications.

Kyla Carlsen, DEGC small business financial manager, said it’s very likely that the DEGC would implement some of the students’ ideas as they build out more tools and resources to better support Detroit’s entrepreneurs and promote small business sustainability.

“We saw a need for this interim opportunity for entrepreneurs to try out their product, to set them up for long-term success and lower the barriers for people to locate in our neighborhoods,” she said.

Upstart, the winning student team, included undergraduates from the Ross School, College of Engineering, and College of Literature, Science, and the Arts.

“We hope we’ll get the opportunity to work with DEGC and see these ideas implemented,” said Brie Riley, a Ross School junior. “We don’t want to just create a pop-up. We want to create long-term sustainable shops.”

Work on the winners’ proposal will likely continue, with a possible spring internship offered through the Center for Social Impact. The center works with urban partners on a project each winter that helps tackle a pressing social or economic need.

“We believe the best way to learn about delivering meaningful social impact is to actually work on the ground with community leaders on projects that will have a lasting impact,” said Matt Kelterborn, the center’s program director. “We look forward to assisting DEGC in the next stage of work.”

Team Upstart suggested a creative structure that includes robust training, a combination of renovation grants and long-term affordable lease agreements to minimize risk for the entrepreneur.

The plan also suggests that the DEGC enter into longer-term lease agreements with building owners so that pop-ups do not need to negotiate short-term leases, said Nick Walsh, a Ross School junior and team leader.

“There will always be something new to bring people back,” he said. “We hope to have four to six pop-ups at a time.”

Jerry Davis, associate dean for business + impact at Ross, said pop-ups could be described as the vernacular style of business in the city.

“Detroit has this format for entrepreneurship that is unique and valuable in the world,” he said.

In addition to Carlsen, judges were Alexa Bush with Detroit’s planning department, Brianna Williams of Dcreated Boutique, and Ross MBA alumni Brandon Hodges of The Platform and Lily Hamburger of the DEGC.

“Every single team had something of incredible value to the DEGC that we will take back and put into our pot as we work to constantly iterate and improve our programs to best serve Detroit’s entrepreneurs and neighborhood commercial corridors,” Hamburger said.