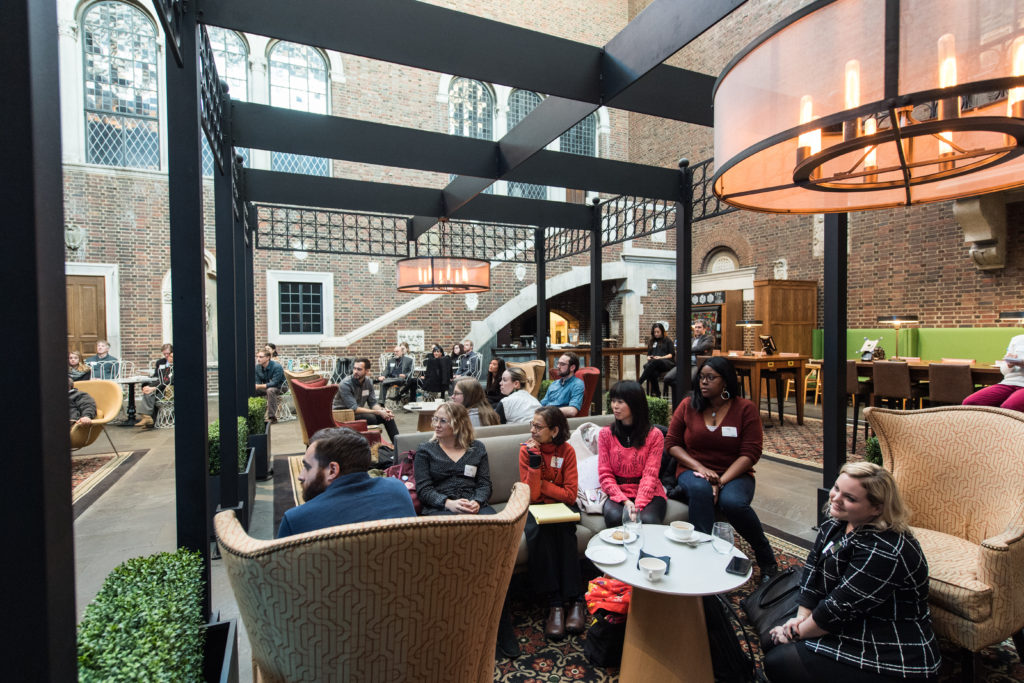 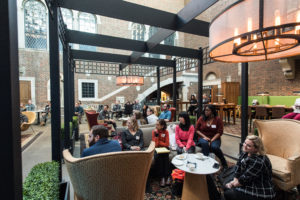 Talk about a winning team: A group of Wayne State University students were the grand-prize winners of two prizes in the Student Design Summit, a competition to find the “voices of young people” on a once-in-a-lifetime project to design a plaza that connects the Detroit Institute of Arts and its neighboring Midtown cultural institutions.

The winning project was twofold in that the Wayne State team not only received the judges’ highest votes but also received the People’s Choice award, receiving the majority of the more than 1,500 votes from the public based on its video submission, officials said Monday during the awards ceremony at the Detroit Institute of Arts. 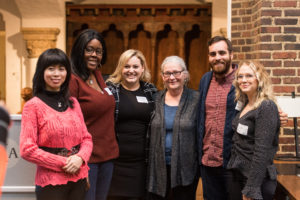 Wayne State team 51Eighty and Midtown Detroit Inc. Executive Director Sue Mosey, one of the judges for the Student Design Summit, at the Kresge Court in the Detroit Institute of Art. Credit: Austin Thomason, Michigan Photography.

Three teams from the University of Michigan swept the honorable mention categories, which included interactive design, product design and overall design. Participants came from U-M’s School of Information and the A. Alfred Taubman College of Architecture and Urban Planning.

The multi-school competition was funded by U-M, and organized by Paul Fontaine, a lecturer at the Taubman College and program manager of the Michigan Engaging Community through the Classroom Initiative.

James Holloway, vice provost for global engagement and interdisciplinary academic affairs, said the university got involved as a way to engage students.

“We supported this project first because it was a terrific opportunity for student learning, to work in parallel with the professional design competition on a real project with authentic stakeholders who are truly invested in the outcome,” Holloway said “And also because we saw it as a way to further connect the schools of higher education — including U-M, Wayne, the College of Creative Studies, and others — and the institutions in the cultural district.”

Midtown Detroit Inc. along with fellow sponsors at the DIA, U-M, Wayne State and others brought together student groups to Detroit as a city with artistic and cultural influence. Design students from around the state are helping boost Detroit’s design and cultural impact along the Woodward corridor at Ferry, John R and nearby streets.

The goal is to create a plaza of sorts that will link the city’s cultural district, anchored by the Detroit Institute of Arts, to the community and the wider world. The more than 90 students that submitted ideas came up with a variety of creative ideas, such as entertainment zones, art-inspired play structures, pop-up programming, digital apps and youth passport programs, improved branding and signage as well as informational yet playful social media.

Twenty-three teams with students from U-M, Wayne State, University of Detroit Mercy, College for Creative Studies and Interlochen Center for the Arts participated in the design competition, which began in fall 2018. The WSU team’s proposal now will go for review by the professional firm selected to create the plaza; three professional teams will display their final presentations at the DIA’s Riviera Court on Jan. 23. The winner will be named in March.

“It was a vigorous discussion” by the jury because 23 student teams submitted “wonderful ideas,” Mosey said. Ultimately, she said, WSU’s team took the prize because they created a project that met the overall goal of finding a way to create community through a broad project that expressed key values of the DIA Plaza proposal, such as creating public space, engaging with all stakeholders and reflecting Detroit’s overall values of public spaces and connection between its cultural neighbors.

WSU team members said they considered the traffic, safety and pedestrian needs of the neighborhoods around the DIA along with surveys, scheduled and impromptu interviews with stakeholders to create their proposal. They suggest the DIA take one of its surface parking lots along John R and turn it into an amphitheater and green space called “Wonder Plaza.” They also suggest moving the Museum of Contemporary Art Detroit to this area. 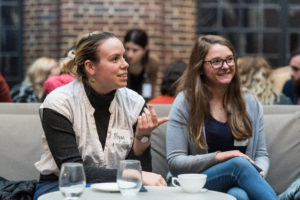 Megan St. Andrew and Caitlin Helgeson of the U-M team DLens chat in the Kresge Court at the Detroit Institute of Art. Credit: Austin Thomason.

The U-M team of Jorge Cazares, Caitlin Helgesen, Megan St. Andrew and Yankun Wang created D Lens, a hands-on, interactive screen that users could access at street level to learn more about the DIA Plaza and related cultural district. The project allows all users to gather information and learn about the district even if they didn’t have Wifi or a smartphone, Helgensen noted.

Karen Dybis is a Metro Detroit reporter with more than 20 years of writing experience including work for The Oakland Press, The Detroit News and Corp! magazine. She’s free-lanced for Time magazine, U.S. News and World Report, The Hollywood Reporter and more. She’s the author of local history books including “Better Made in Michigan,” “The Witch of Delray,” and “Secret Detroit.”