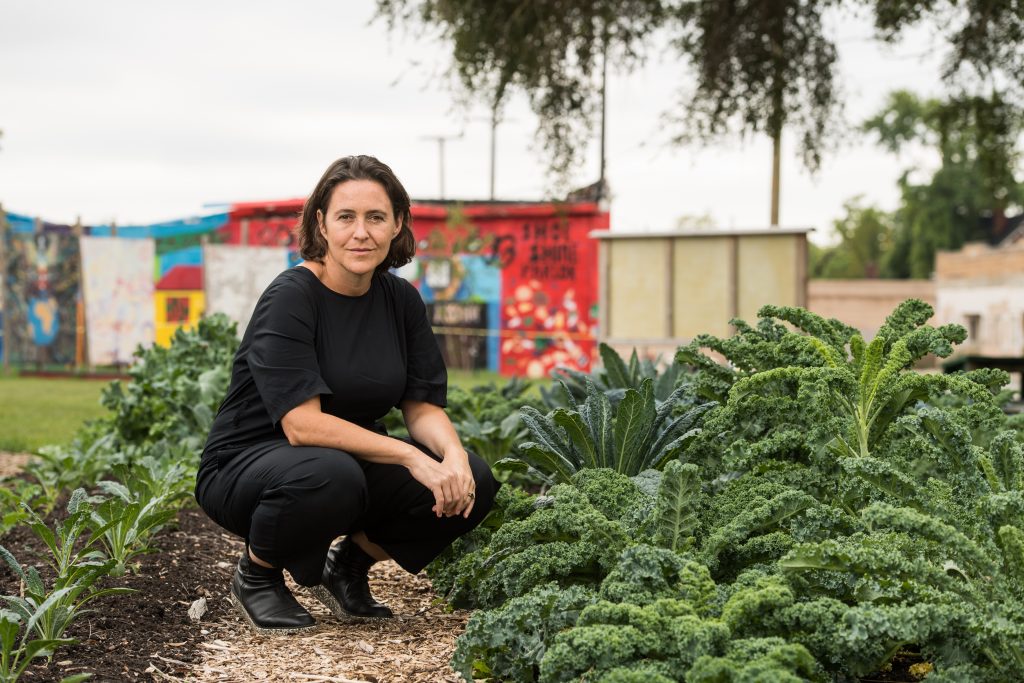 Anya Sirota, an associate professor of architecture at the University of Michigan Taubman College of Architecture and Urban Planning, has been working to help make the Oakland Avenue Urban Farm self-sufficient and sustainable. Credit: Austin Thomason, Michigan Photography. 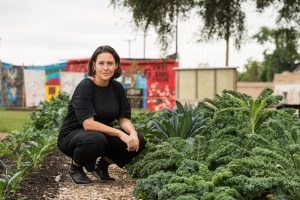 Anya Sirota, an associate professor of architecture at the University of Michigan Taubman College of Architecture and Urban Planning, has been working to help make the Oakland Avenue Urban Farm self-sufficient and sustainable.
Credit: Austin Thomason, Michigan Photography.

Sometimes Sirota is working within the university to shape pedagogy around contemporary practice and the role of architecture in civic life. At other times, the experimental designer is collaborating with residents in Detroit’s North End neighborhood to integrate urban farming, legacy small businesses, and pop-up performance spaces — and with urban landscapers, city planners, and some dozen of Detroit’s most influential and longstanding cultural institutions to imagine an all-inclusive Midtown Cultural District. In between she has established a virtual meeting place as a nexus of thought for art, architecture, and urban intervention that transcends physical space and national frontiers.

“My career has focused primarily on expanding an understanding of cultural infrastructure and its emancipatory, collective possibilities,” she says.

Sirota’s efforts are diffuse and unique attempts to create spaces that are agonistic forums “where people with a range of views, some even discordant, can get together, hash it out and contribute to building civil society,” she says. In an age of pop algorithmic social bubbles, Sirota seeks to make the anti-bubble, building and leveraging intensive relationships to bridge the gap between social enclaves that don’t typically find themselves in the same conversations.

This dedication to public culture extends to Sirota’s role as associate dean because “I’ve carved out a position that fundamentally supports the culture of our distinct and diverse community,” she says. When Sirota assumed the role in 2019, no one could imagine that a global pandemic was on the horizon. At that time, she was interested in building stronger, more interdisciplinary bridges between academia and the real world so that students would understand their roles as architects and planners with a greater sense of agency.

“The pandemic accelerated our response to those questions because it allowed us to reimagine the boundaries of the classroom and invite more diverse and emergent voices into conversation with our students. At the same time, it raised important concerns about how to preserve our collective culture of place,” she says.

Through four design competitions and other initiatives launched by the Academic Innovation team in summer 2020, a unifying thread was the engagement and involvement of Taubman College students. “We saw an opportunity to spark new thinking about real and virtual spaces for learning and social experience, and to evolve our culture of place by co-creating tools, methods, and strategies for a more humane, playful and intuitive way of being together in this emergent space,” Sirota says.

But Sirota’s practice — she is co-founder of the studio Akoaki with Jean Louis Farges — manifests deeply in physical environments as well, and has long focused on using architecture and design as tools for urban regeneration and cultural preservation. In 2019, she brought together a team that won an international design competition that will change the way visitors and Detroiters experience the Midtown cultural district. 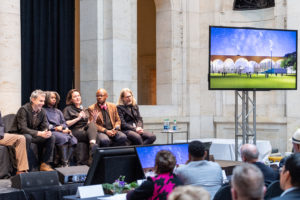 1/23/19 Anya Sirota, associate professor of architecture and principal of design duo Akoaki in Detroit, talks about the proposed canopy that would rise high and flexible as a DIA addition. It would be used to exhibit new works, large-scale exhibits and events. Scott Soderberg, Michigan Photography.

The COVID-19 pandemic has altered how Sirota and her team move the project forward — while building on new strengths in digital engagements that she has led at Taubman College over the past year. When the pandemic made it impossible to share “Detroit Square” models in public forums, Sirota’s studio partnered with Oliver Popadich, M.Arch ’18, to launch ccpi.online, a navigable digital model.

“In our practice, some of the best conversations take place around a model,” says Sirota. In her view, people often empathize with the legibility of physical objects, while other modes of architectural representation may require some level of professional literacy that can obfuscate the basic premise of a work. The virtual iteration works like a live pinup board and an event platform, “where people can engage in collective conversation. It allows us to continue our practice and the engagement activities that are integral to the design process, despite the challenges and disruptions we are experiencing today,” she explains.

Much of Akoaki’s other current work is centered on Detroit’s historic North End, a once-thriving entertainment district that today retains few physical markers of that legacy. For Sirota, who recalls how Jewish cemeteries were paved over in her native Ukraine, it was heartbreaking to see this important part of African-American history vanishing when she moved to the area 10 years ago. Akoaki was able to connect with existing community leaders and active projects in the neighborhood to introduce a utopian vision of  “ONE Mile” — a whole network of projects, programs, and installations that helped visibilize the narratives and thriving culture of the neighborhood.

“How do you tell a story if you remove most or all of the physical markers associated with that story?” Sirota asks.

Akoaki’s work — for which Sirota was awarded a 2018 Architectural League Prize — addresses the wreckage left behind by systemic racism, poor planning, and aggressive blight remediation in an area where resources are scarce. Informed by Sirota’s and Farges’s backgrounds (he is French), the couple set out to apply the European idea of culture-as-catalyst-for-change and economic development in a post-industrial world, but with one major difference — in the United States, public funding for this kind of work isn’t easy to come by.

“We’ve looked for ways to design without the typical capital influx that supports architecture,” Sirota says. “In the process, we’ve unintentionally addressed the perennial criticism of architecture, namely, its contingency on power and capital.”

To that end, many of Akoaki’s structures have focused on inexpensive, temporary, portable installations that combine design with cultural programming, often tapping into Detroit’s rich musical and artistic history, with a flair for spectacle and celebration — including a traveling “mothership” that houses a DJ, sound system, and light show and can “land” anywhere in the neighborhood, converting unused buildings or open lots into a pop-up night club.

In February 2021, Sirota received a significant boost for another project in the neighborhood: a $405,000 grant from the John F. and James L. Knight Foundation to design and adaptively reuse an existing building that will be part of the Oakland Avenue Urban Farm. In partnership with the farm, Sirota’s studio will transform a vacant residence into a community-centered design library and meeting space — one that’s run entirely with community support and input. 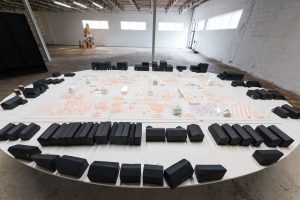 As the Akoaki design firm founded by Sirota became more involved in Detroit’s North End and the Oakland Avenue Urban Farm, she realized the high risk that a buyer could purchase the land out from under it. Like many of Detroit’s urban farms, it was started on land that didn’t belong to the farmers — land left vacant from blight remediation that, during the Great Recession of 2008, local residents couldn’t imagine having any real value or be targeted for speculation.
Date: Sept. 19, 2018
Credit: Austin Thomason, Michigan Photography.

The project builds on a five-year-long effort to realize a civic commons and transform the farm into an experimental urban prototype for equitable regeneration. The goal is to help the farm reimagine and realize six acres of the North End as a vibrant landscape with cultural infrastructure that benefits residents and mission-driven organizations alike.

“Our hope is that this project offers a valuable resource to the North End and continues to build on all of the positive things happening in the community,” says Sirota. “This facility’s place as a piece of permanent infrastructure will provide residents and the university the opportunity to learn from one another for years to come, and it encourages us to reimagine the role of the architect as a negotiator — as an enabler and a galvanizer of networks of people.”

Sirota’s concurrent reimagining of architecture education through her leadership as associate dean for academic initiatives speaks to  her embrace of “radical flexibility,” born from her own experience as a nontraditional architecture student. She continues to pursue collective endeavors and experiences — in digital space during the pandemic, and through institutional networks and physical spaces post-pandemic.

“At any scale and medium, designers have the unique capacity to cultivate spaces for pluralist, inclusive, collective encounter, to build spaces that enable participation in public discourse, and to create situations that shape the future of civic life,” she says, “and that potential keep me doggedly optimistic about our profession.”