U-M partners with the Detroit Public Schools Community District and others to launch the School at Marygrove, a cradle-to-career educational partnership that will include a state-of-the-art early childhood education center, a new K-12 school, and the introduction of an innovative teacher education program modeled after hospital residency programs. 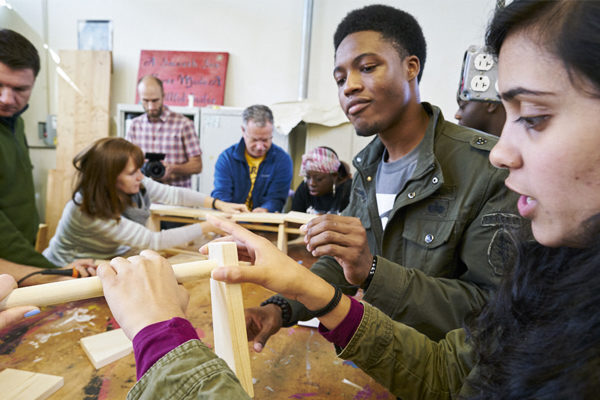 The Penny W. Stamps School of Art & Design partners with the Detroit Public Schools Community District to transform a vacant 3,200-square-foot building into the Brightmoor Maker Space, a place for kids and adults to build their creative skills and nurture business ideas.

The Partnership on Economic Mobility is established between U-M’s Poverty Solutions initiative and the City of Detroit to identify and implement strategies that improve economic opportunity and reduce poverty in Detroit. 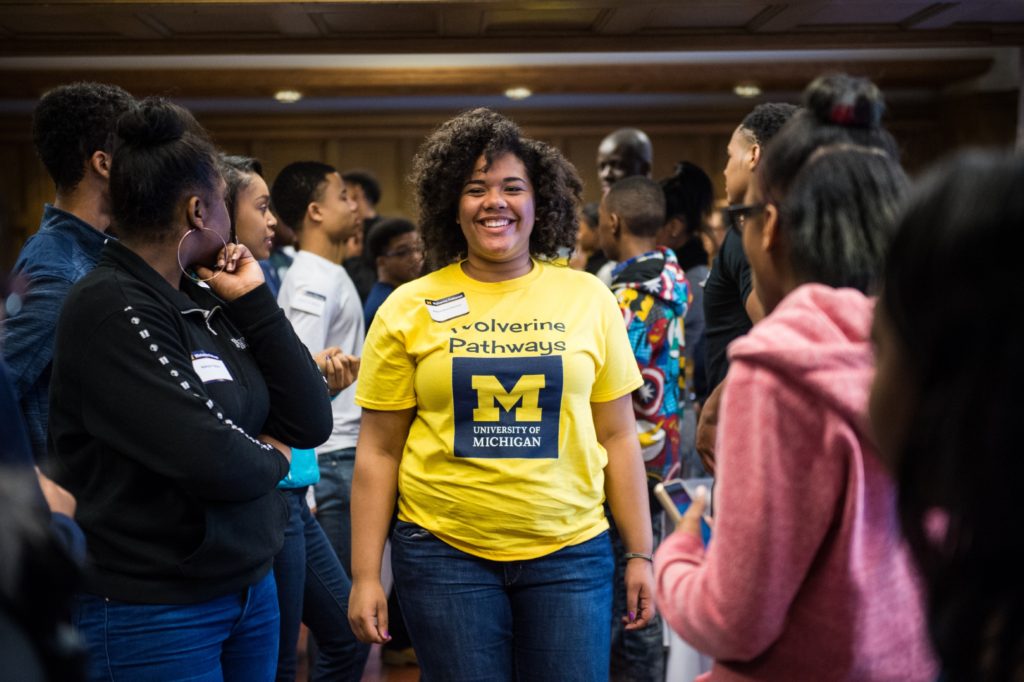 Wolverine Pathways — a college readiness program for 7th- to 12th-grade students that launched in Ypsilanti and Southfield in 2016 — expands to Detroit and awards full-tuition scholarships for four years to students who successfully complete the program and earn admission to U-M.

The Board of Regents votes to acquire full ownership of the Horace H. Rackham Educational Memorial Building on Farnsworth Street, intended to become a vibrant space for U-M and community activities in Detroit. 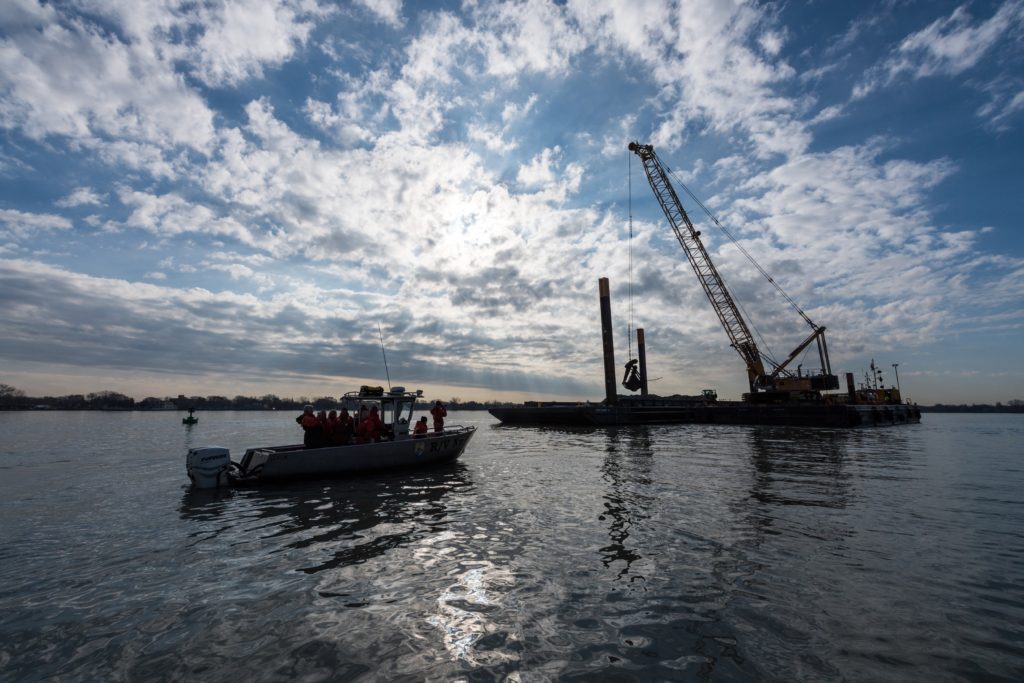 U-M researchers are part of a multi-institution team working to restore lake sturgeon by building rock spawning reefs in two Detroit-area rivers. A set of reefs is completed in December in the Detroit River near Belle Isle.

U-M launches Poverty Solutions, an initiative to explore and test models to ease the effects of poverty and broadly share that knowledge. Much of this work takes place in partnership with Detroit residents and organizations.

The Lightweight Innovations for Tomorrow (LIFT) Consortium opens in Detroit’s Corktown neighborhood, with U-M a key partner in the public-private manufacturing insitute. The institute is charged with establishing a regional manufacturing ecosystem to move cutting-edge lightweight metals out of the research lab and into tomorrow’s cars, trucks, airplanes, and ships for both the commercial and military sectors. 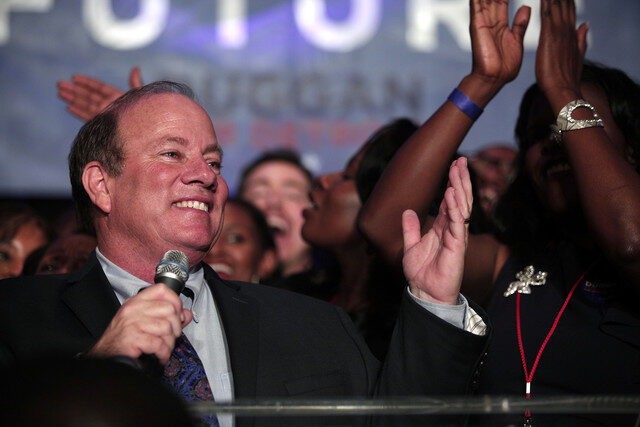 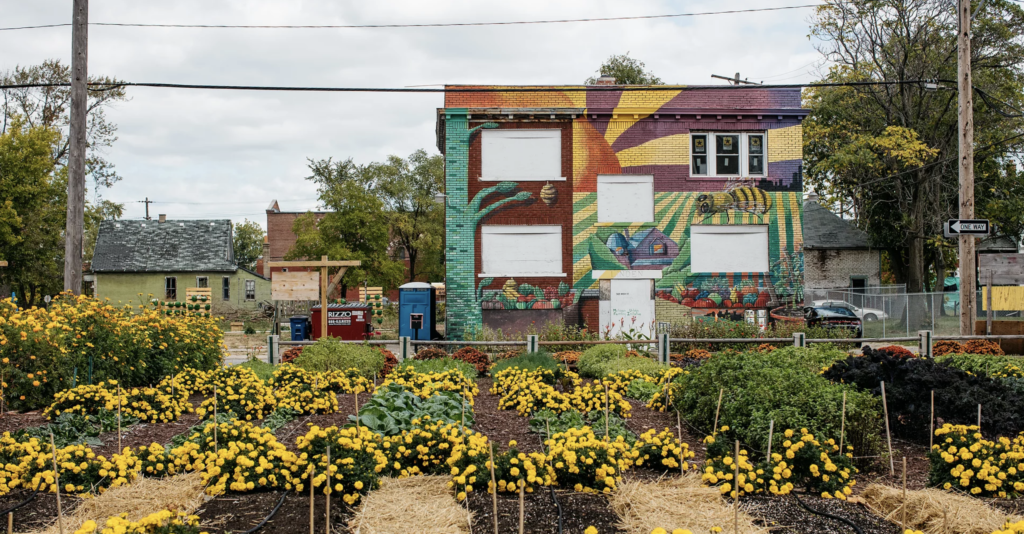 U-M students Tyson Gersh and Darin McLeskey found the Michigan Urban Farming Initiative in Detroit’s North End with the mission of using urban agriculture as a platform to promote education, sustainability, and community. With the help of more than 10,000 volunteers, MUFI has grown and distributed more than 50,000 pounds of produce to more than 2,000 households. 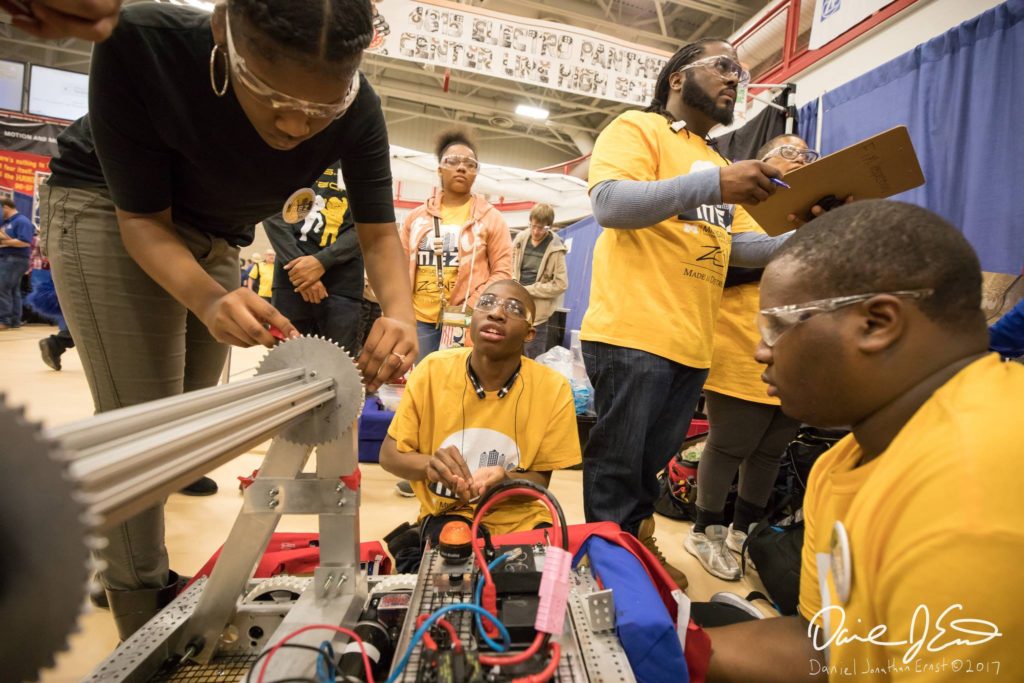 The Michigan Engineering Zone (MEZ) opens as a collaboration between the College of Engineering, Detroit Public Schools, and the FIRST Robotics program to encourage young people to pursue careers in science and technology fields.

The Semester in Detroit program begins after four undergraduate students set out to create a program that fulfills a vision of applied education, community engagement, and social justice. 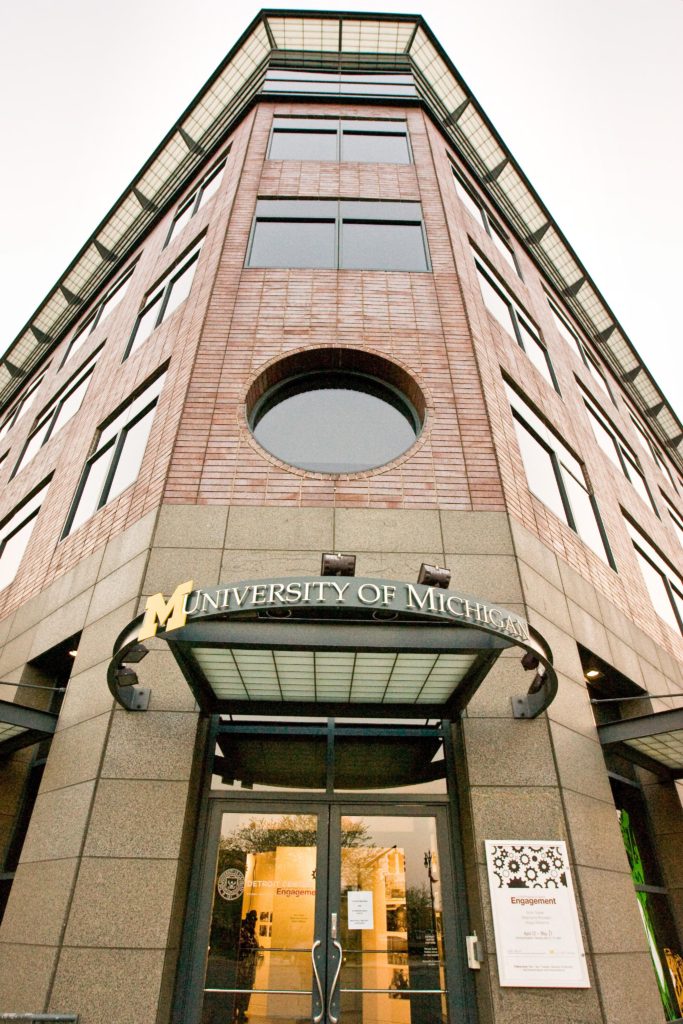 The University of Michigan’s Detroit Center opens on Woodward Avenue to support and grow research projects and outreach initiatives while also offering space for an increasing number of university programs involving Detroit citizens and organizations. 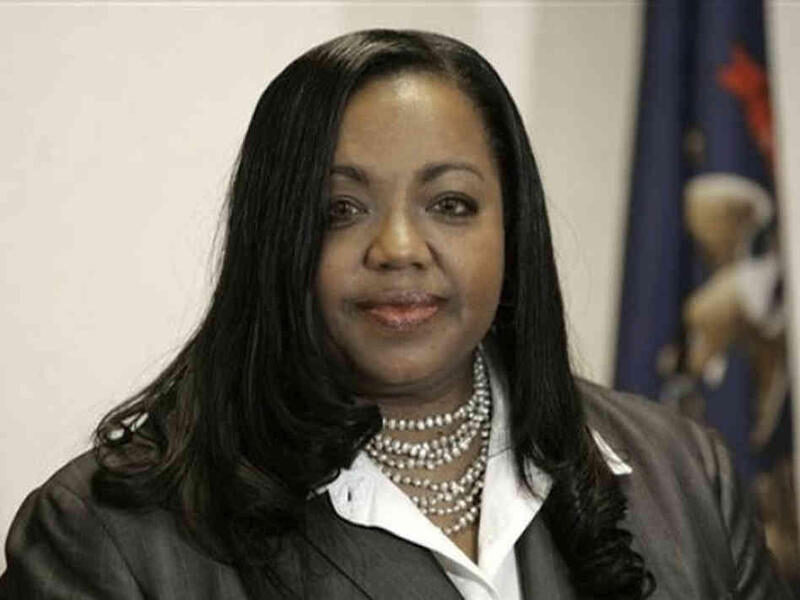 The Detroit Community-Academic Urban Research Center is established as a collaboration of Detroit organizations and U-M researchers working to improve health equity in Detroit. 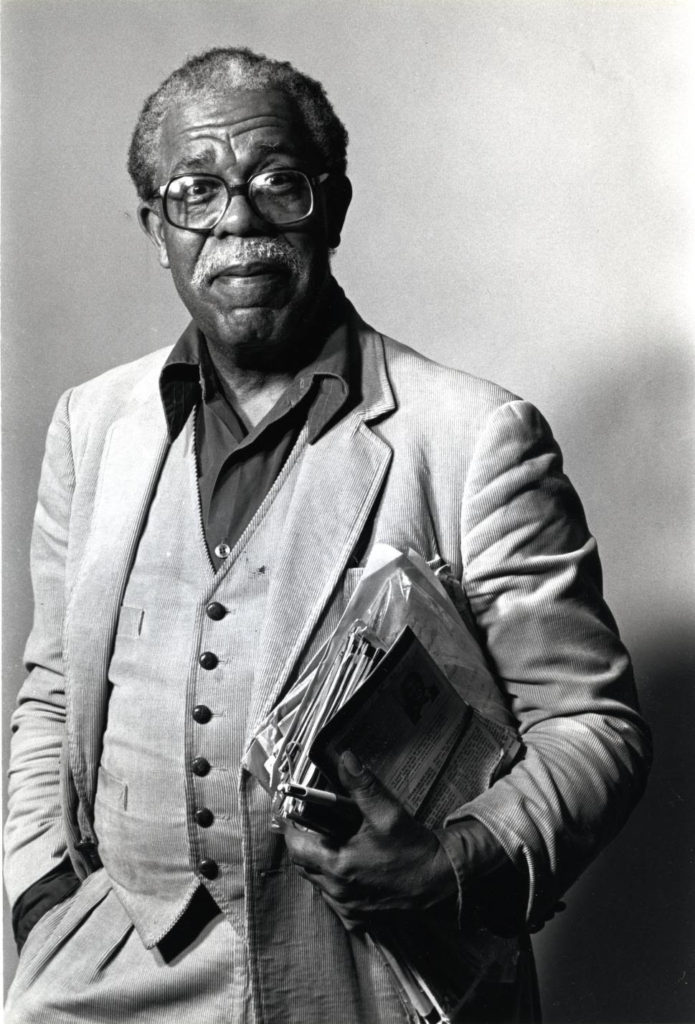 The university partners with Wayne State University in Detroit and Michigan State University to establish the Merit Network. The network plays a key role in the development of the internet, enabling scale-up and enhancing the interactivity of computer networks. 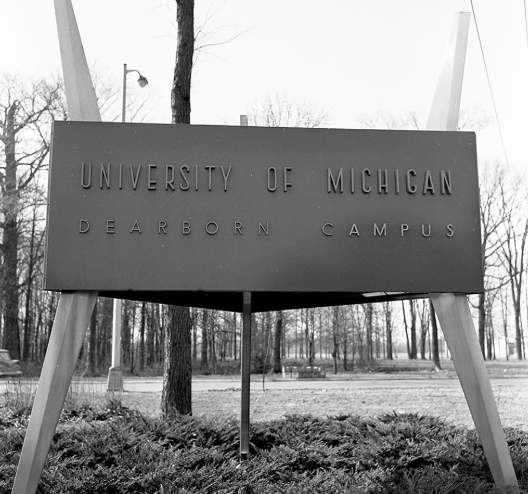 The University of Michigan-Dearborn opens as the Dearborn Center of the University of Michigan with a gift of just over 200 acres of land and $6.5 million from the Ford Motor Company. Early academic offerings include a cooperative education program between the company and the university for engineering and business administration students. 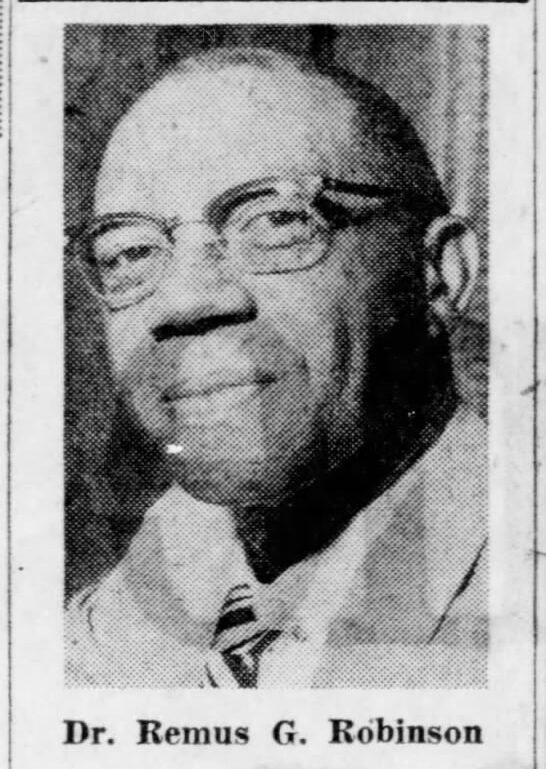 Graduate of U-M Medical School and chief surgeon at Detroit’s Parkside Hospital, Dr. Remus Robinson is elected to the Detroit school board and becomes its first African American member. As school board president, he fights to end de facto segregation in Detroit classrooms. 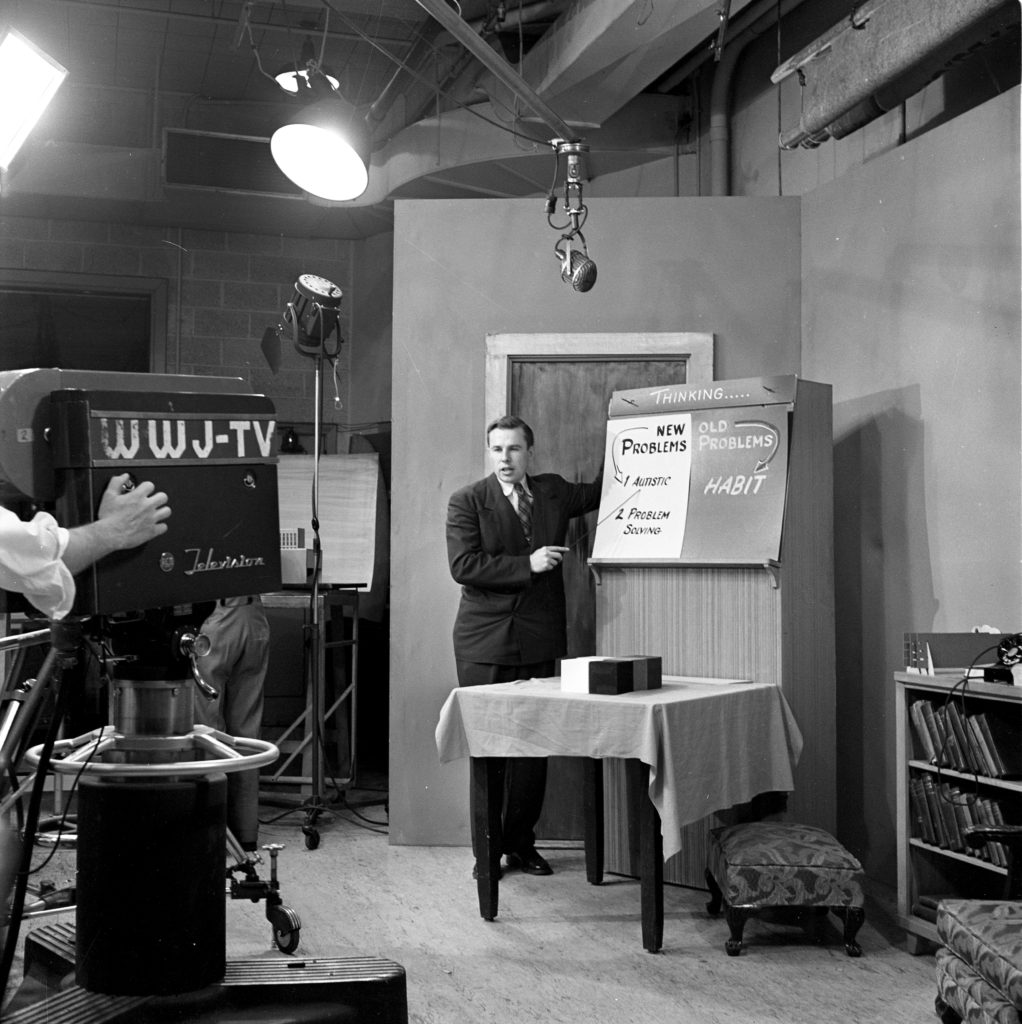 Working with the Detroit News’ station WWJ-TV, the University of Michigan launches a series of telecourses taught by the faculty. Registered viewers pay a small fee and receive a certificate of participation. U-M offered these courses through 1954. 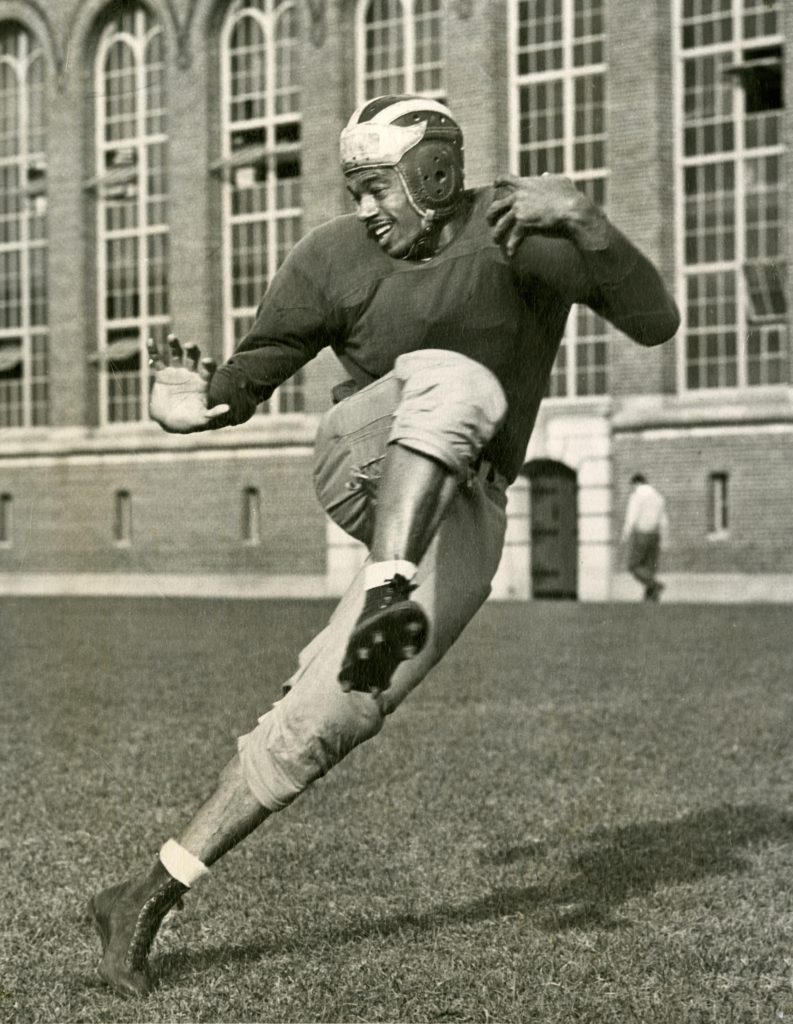 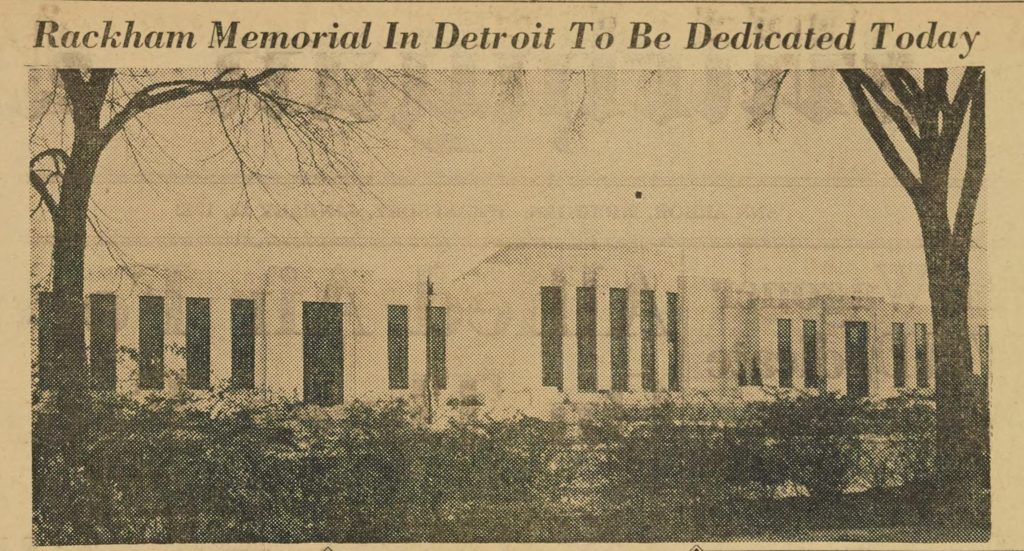 The Horace H. Rackham Educational Memorial Building opens in Midtown Detroit as a social and educational meeting place for U-M, the Engineering Society of Detroit, and various Detroit organizations. 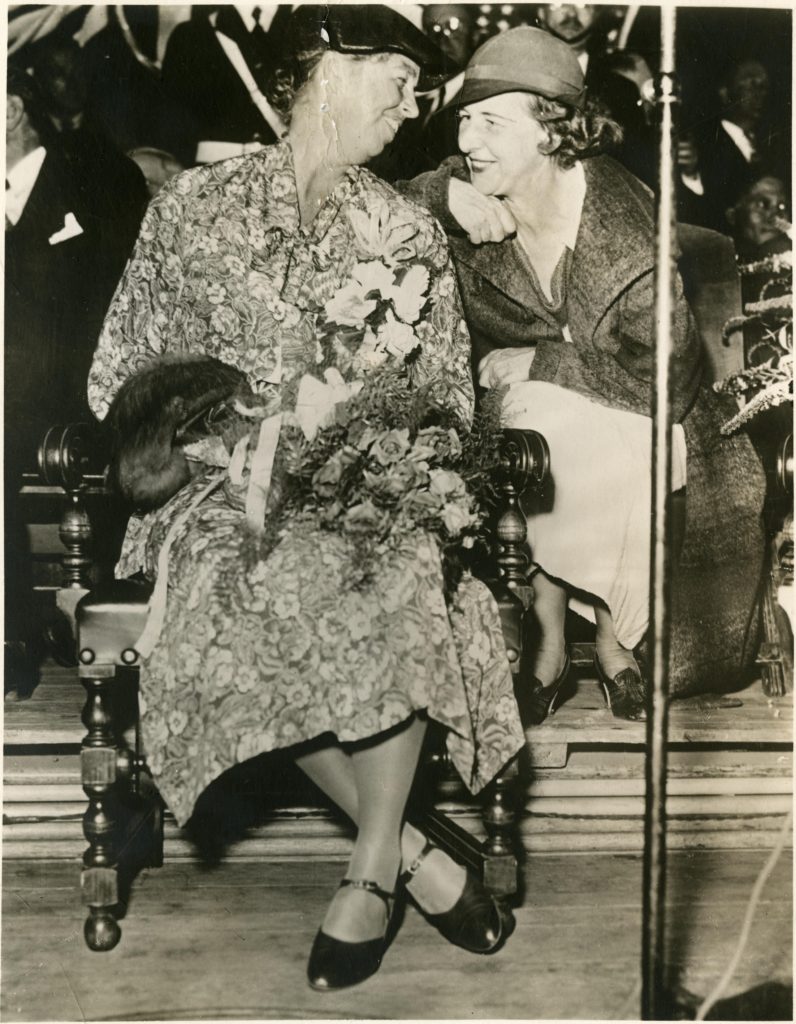 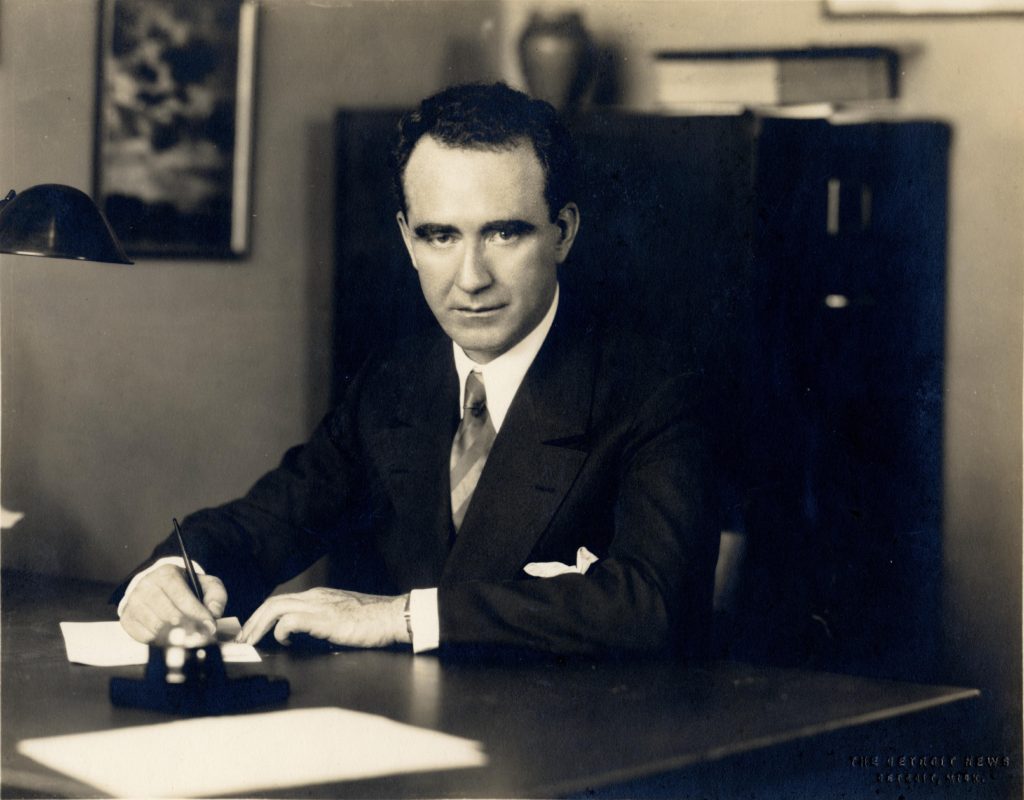 A 1914 graduate of the Michigan Law School, Frank Murphy is elected mayor of Detroit. 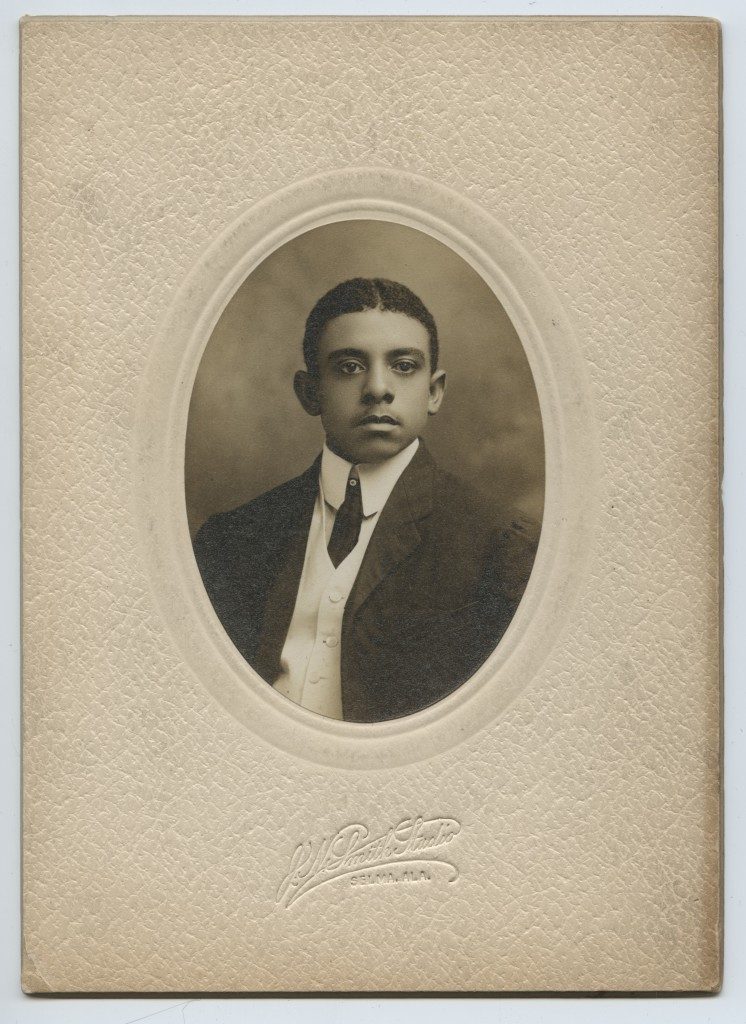 The Ambassador Bridge opens, connecting Detroit to Windsor. Detroiter Cornelius Langston Henderson, the second African American to earn a U-M engineering degree, was responsible for the structural steel design of the bridge from the Canadian side, as well as the massive steel tubes of the Detroit-Windsor Tunnel, which opened two years later. 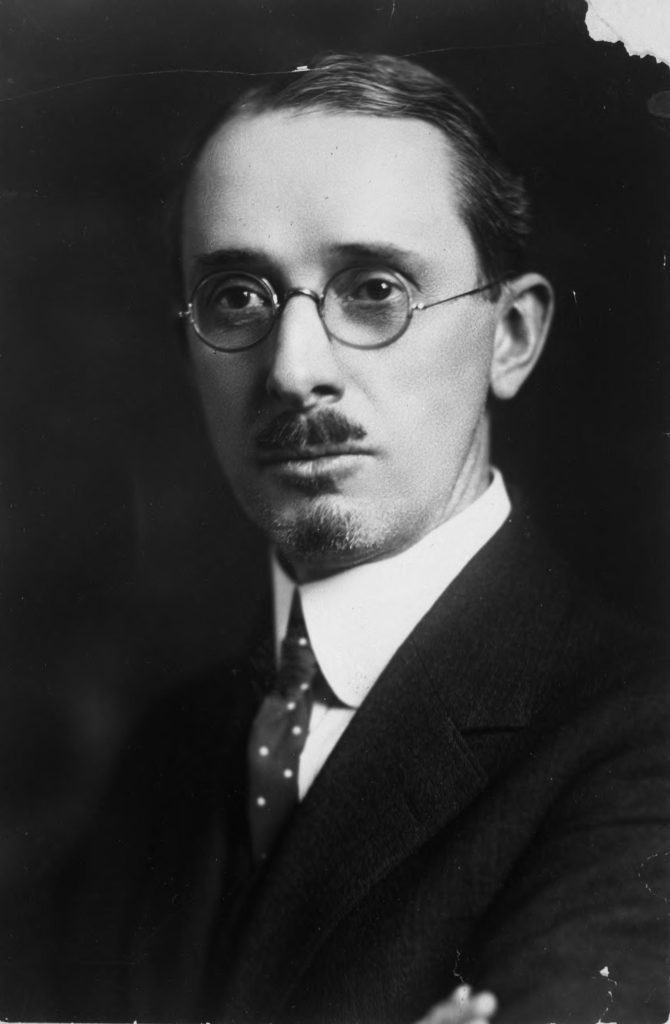 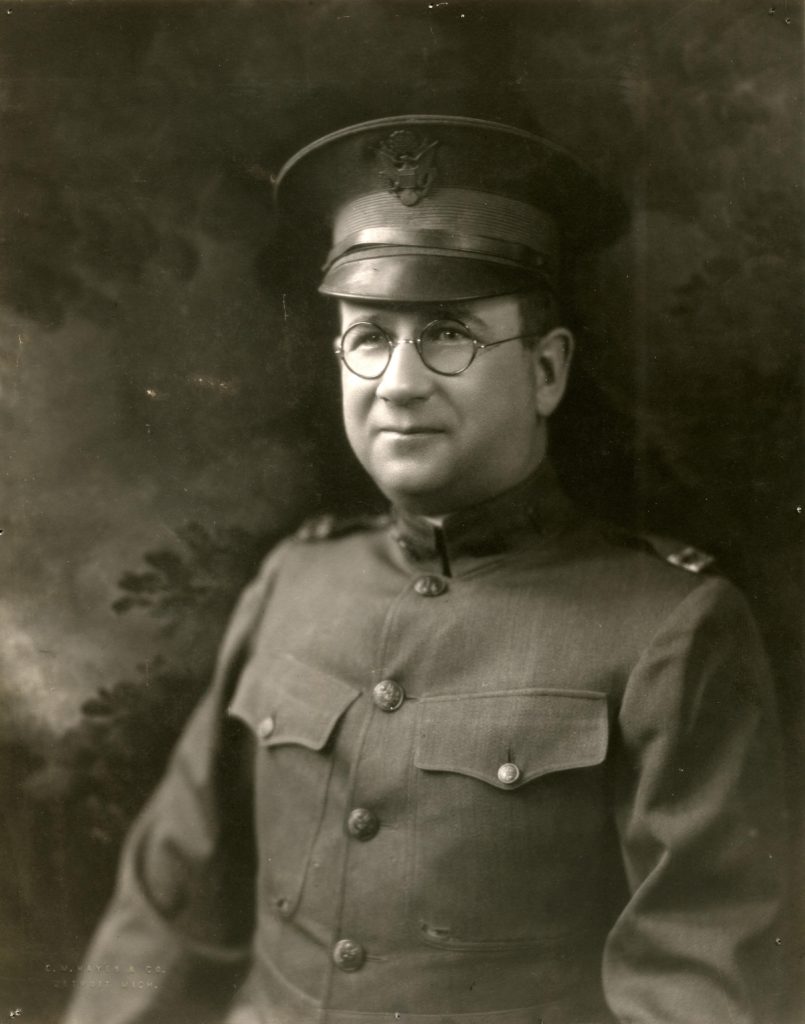 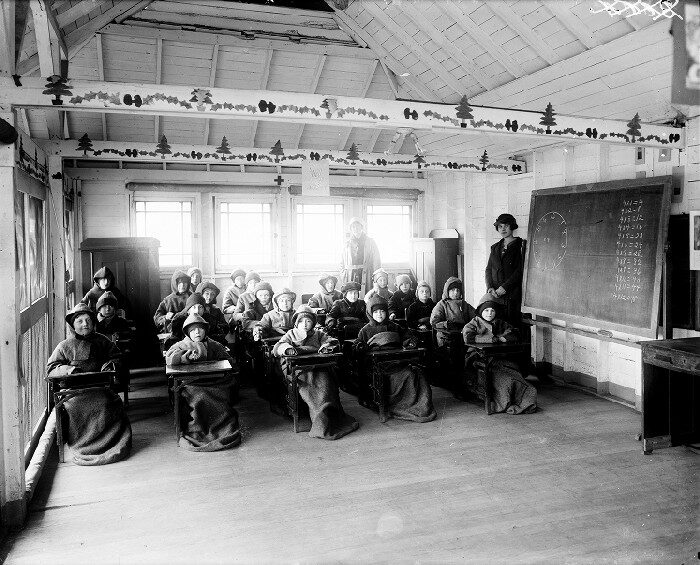 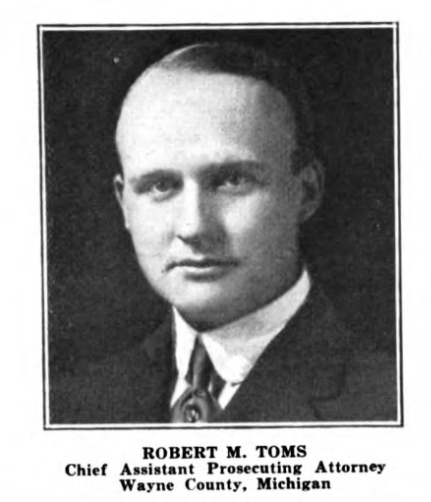 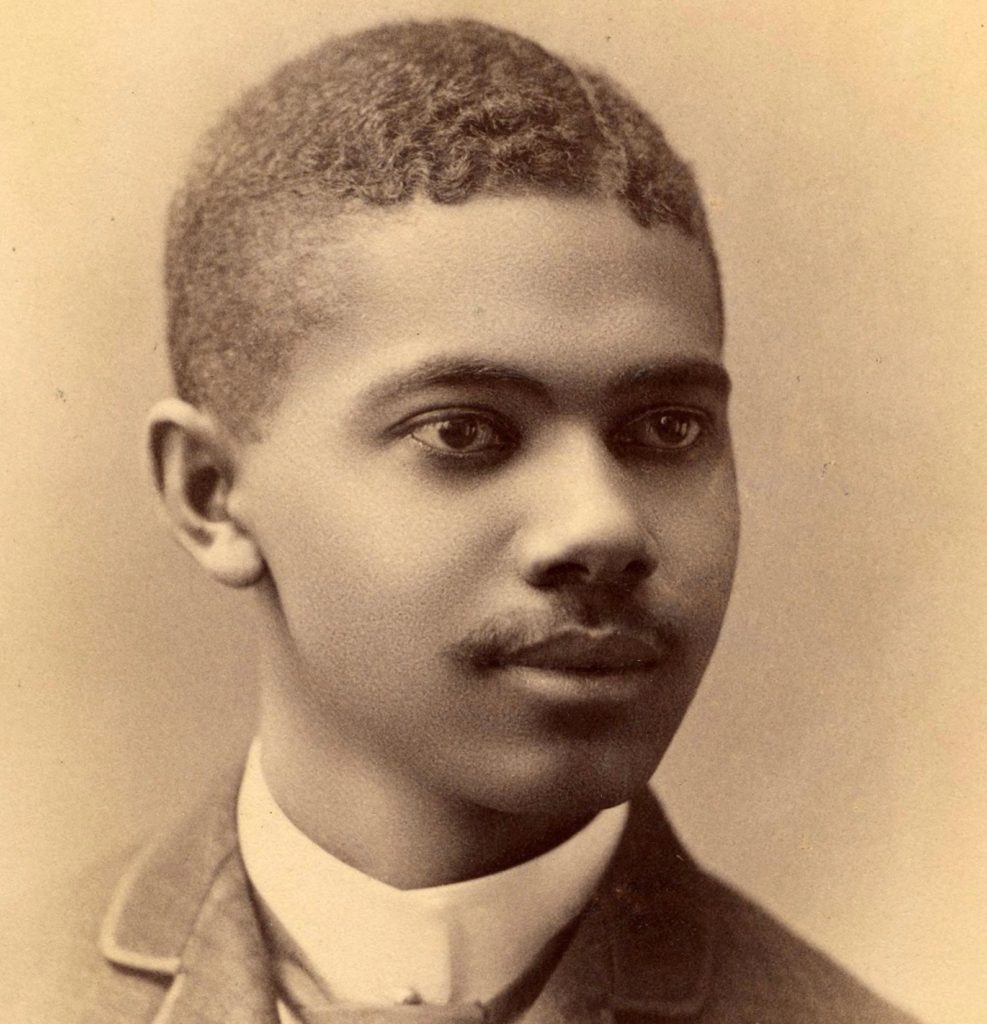 The Wolverines Play in Detroit 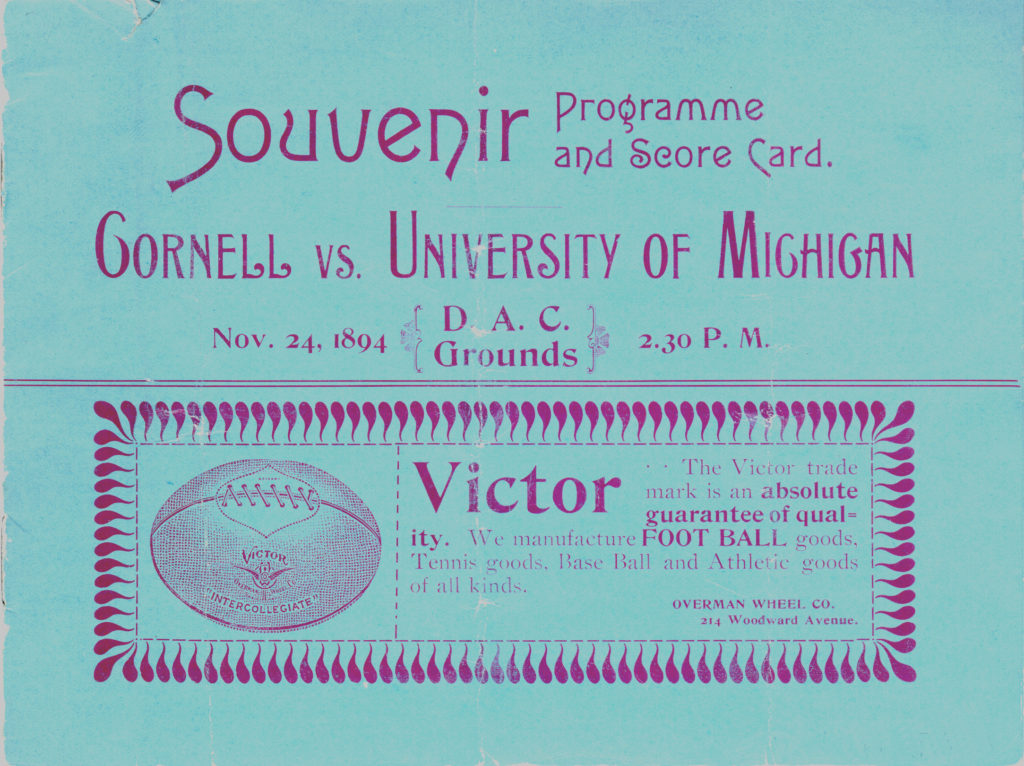 Between 1879 and 1901, U-M football regularly plays its games in the city, drawing the biggest crowds of the season thanks to U-M alumni in Detroit who turn out for games. The Wolverines typically play on the grounds of the Detroit Athletic Club, then located west of Woodward Avenue between Forest and Canfield streets. 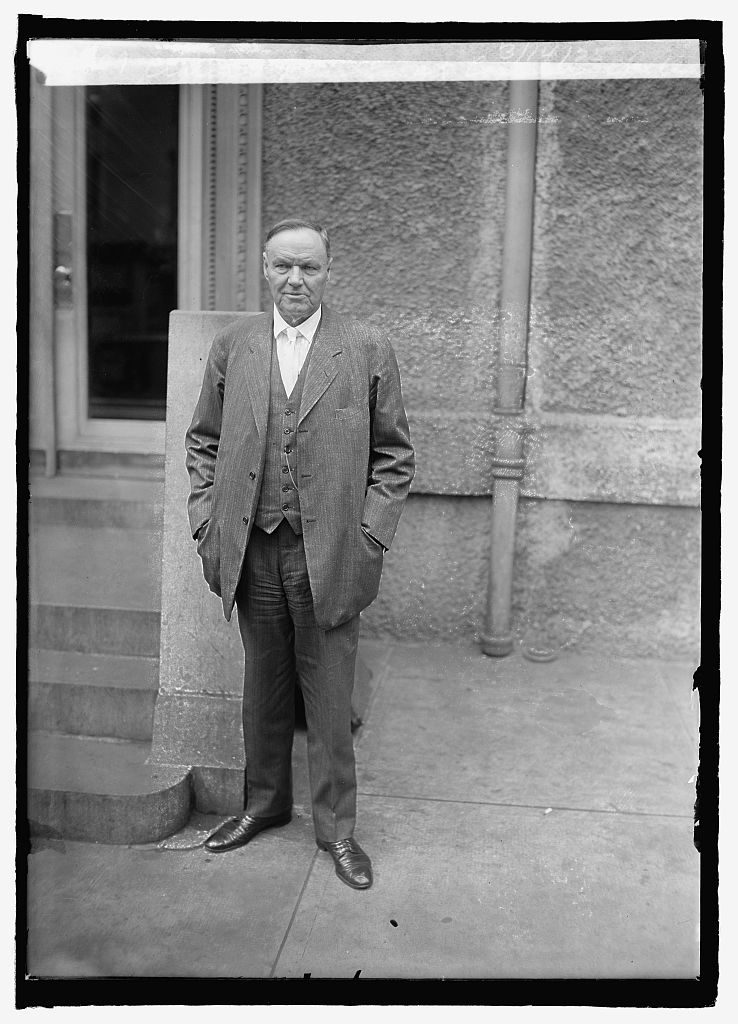 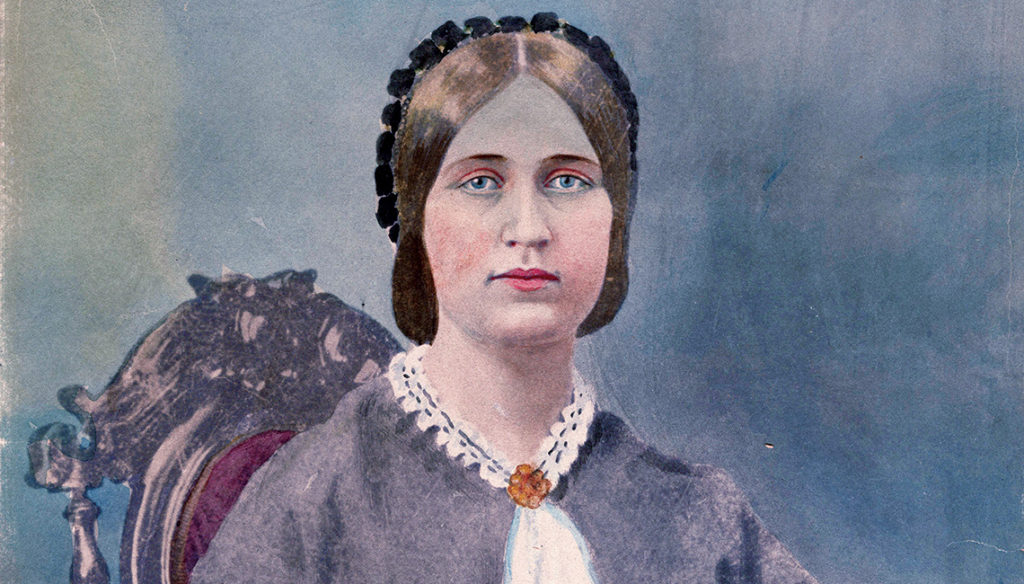 Sarah Gertrude Banks graduates from the U-M Medical School, where she is in the second group of women to earn a medical degree. She goes on to serve as resident physician at the Women’s Hospital and Foundlings’ Home in Detroit before opening a private practice, establishing herself as one of the city’s foremost physicians, and becoming a strong advocate for women’s suffrage. 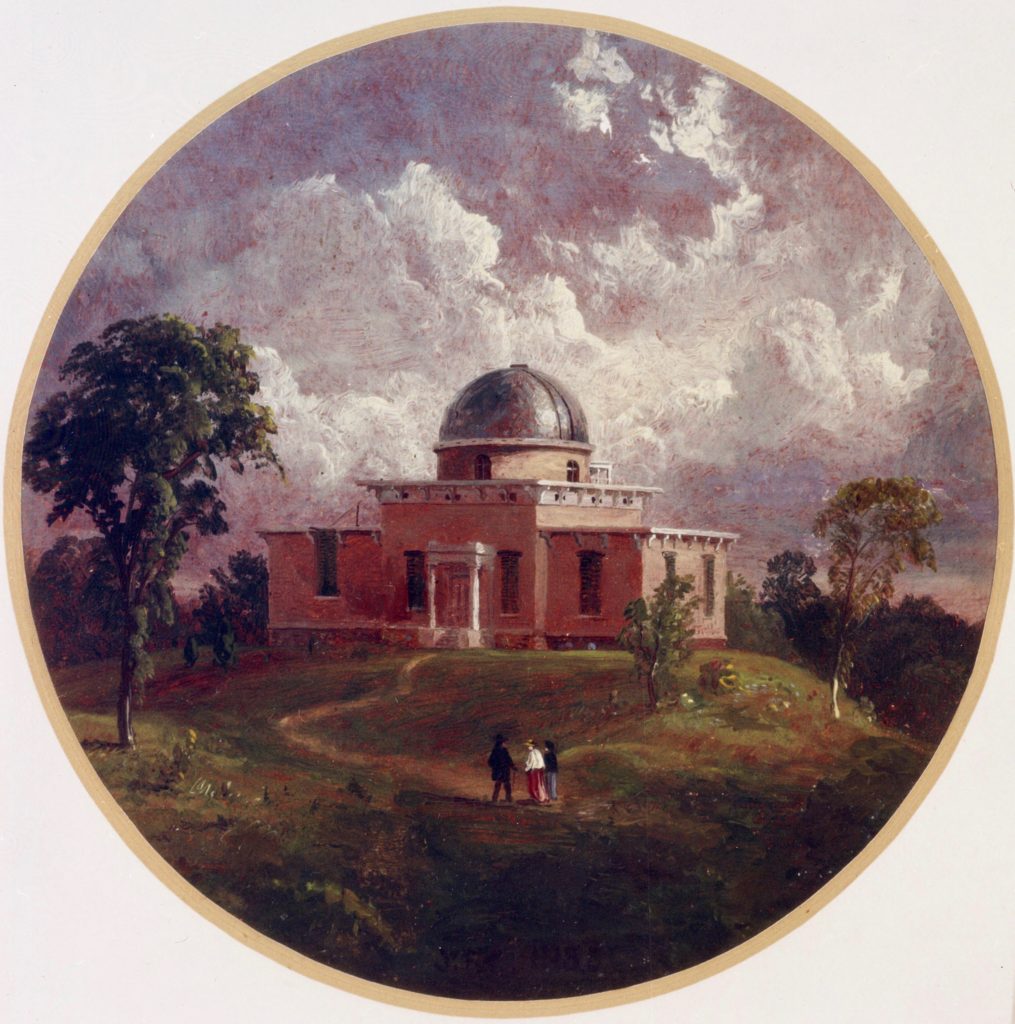 With gifts from Detroit business leaders, the Detroit Observatory in Ann Arbor is built expressly for scientific study, helping to transform U-M into one of the first U.S. research universities. 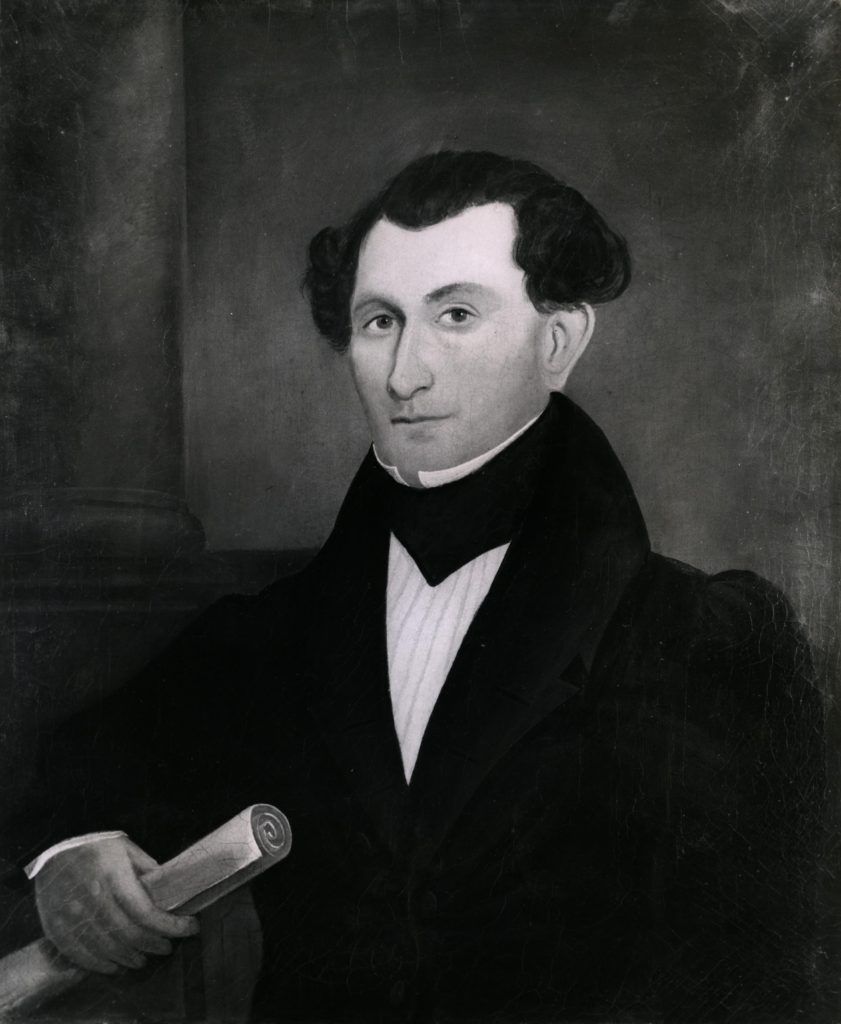 Dr. Zina Pitcher, army surgeon, botanist, teacher, and politician, serves three terms as mayor of Detroit. He is the driving force behind the city’s first public school system and an active member of U-M’s Board of Regents from 1837-52.

Under a new state constitution, the University of Michigan relocates from Detroit to Ann Arbor. 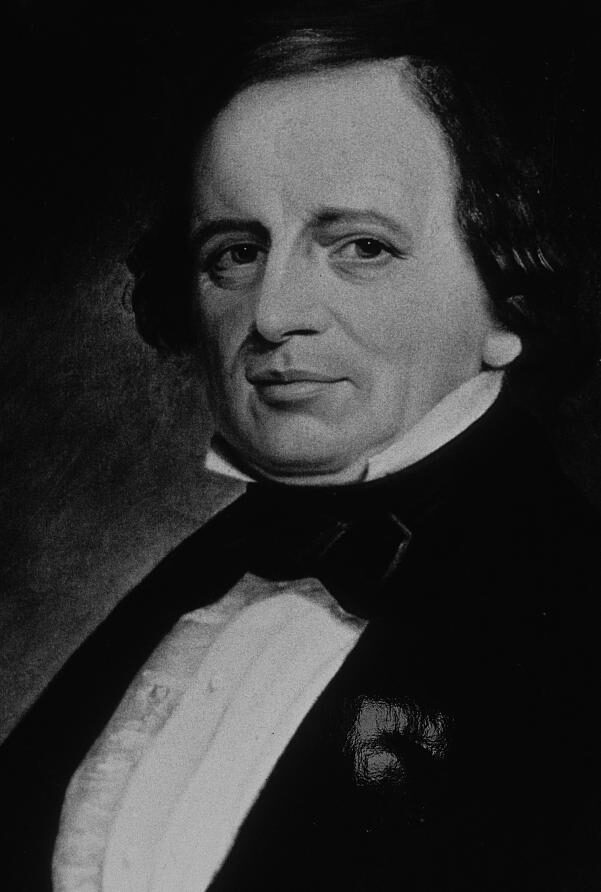 John R. Williams is elected Detroit’s first mayor and serves as one of the original trustees of U-M. After four years in Detroit, Lemuel Shattuck returns to New England, where he becomes a leader in public health. According to a testimonial letter from the time, Detroit citizens praise him for growing the young U-M “from its infancy to that state of maturity and usefulness.” 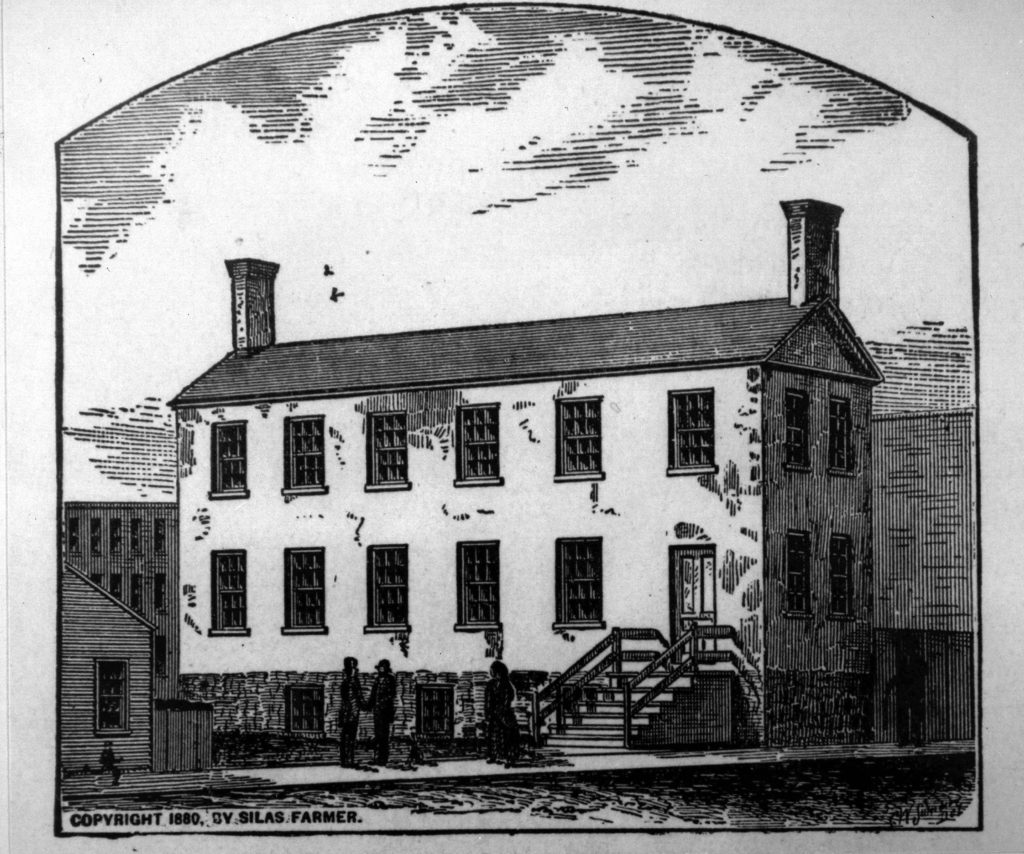 The “University of Michigania’s” first building is completed, paid for by citizens and standing two stories tall. It is home to teachers Lemuel Shattuck at the primary level, and Hugh M. Dickie at the more-advanced classical academy — in effect, a high school.

On September 26, a cornerstone is placed on Bates Street near Congress Street in Detroit — the territory’s capitol at the time — signaling the “University of Michigania’s” physical presence in the city.

The university is founded in Detroit as the Catholepistemiad, or University of Michigania, by Augustus Woodward, Rev. John Monteith, and Rev. Gabriel Richard.