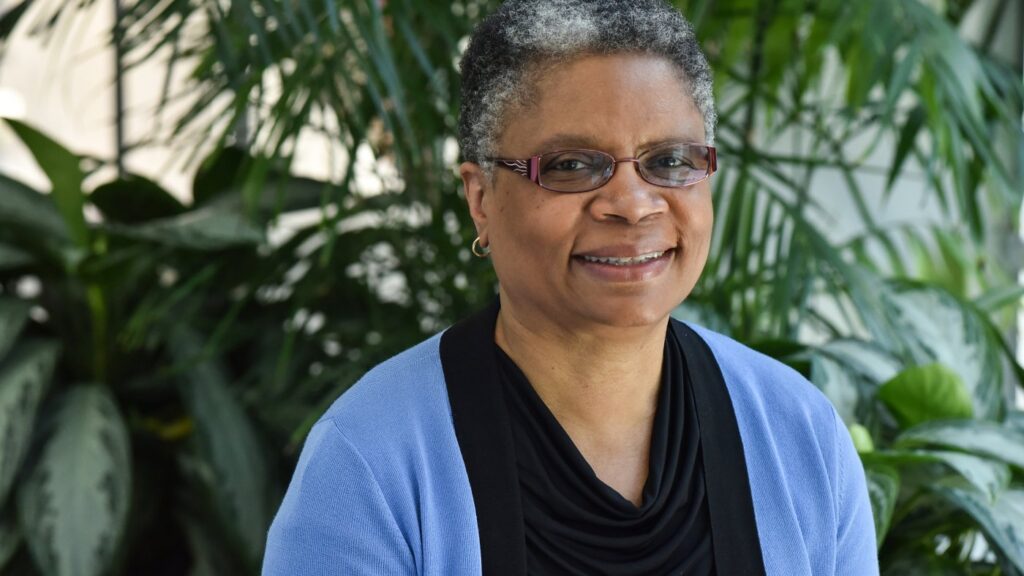 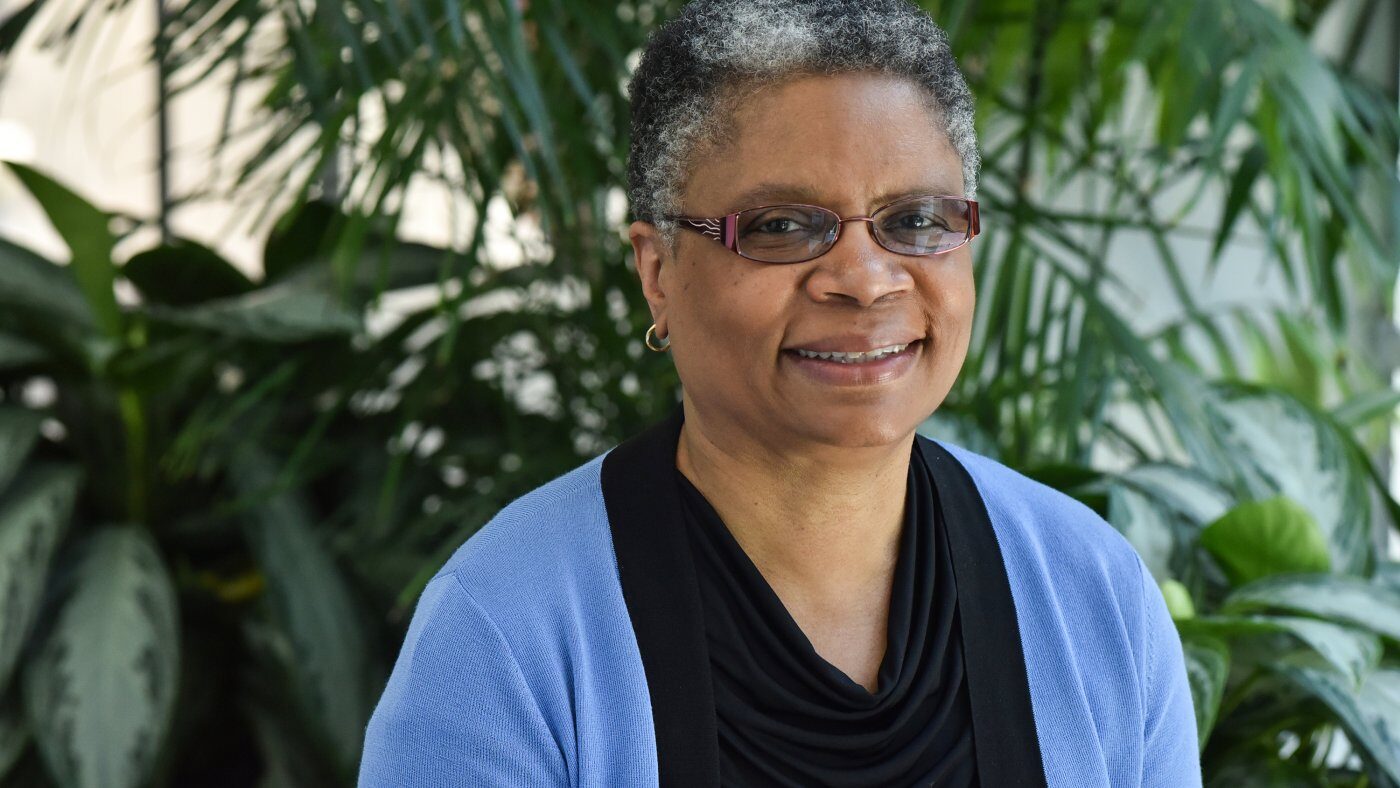 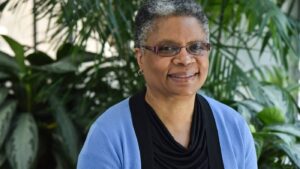 June Manning Thomas was first drawn to the freedom of cities.

As an African American girl in small-town South Carolina in the 1950s and 1960s, freedom felt hard to come by. She was one of a handful of students who desegregated her high school, suffering repeated racial trauma from her white classmates as a result.

But cities presented opportunities. On annual trips to Miami, she could dine in restaurants and enjoy the thrill of a drive-in movie. Jim Crow felt farther away.

“To drive somewhere and be treated differently, do different things, was liberating,” says Thomas, Ph.D. ’77.

It wasn’t until she was an undergraduate student at Michigan State University that Thomas realized she could make cities her life’s work. She began her studies at Furman University in South Carolina, where she was the first of three female African American students. Doing “double-duty desegregation work,” as she calls it, compounded the trauma she endured in high school. So she transferred to MSU on the advice of members of the Baha’i Faith community. There she embraced the opportunity to take classes in many different fields. She was captivated by one particular professor who taught urban sociology and by Jane Jacobs’s The Death and Life of Great American Cities, which she read for class.

“I saw that people study cities. They improve cities. That was a revelation,” Thomas says. “I decided that urban planning would marry my interest in social and racial justice with this interest in cities that I’d had no idea what to do with.”

What she ended up doing with those interests was becoming a path-breaking voice about race relations and social justice issues related to urban planning in U.S. cities — work that she says was prompted by necessity.

“There were no visible Black scholars in urban planning. It’s hard to describe what that’s like, but it was like terra incognita,” she says. “At some point, I realized if there was going to be a literature, I’d have to start it.”

As a Ph.D. student at Michigan, Thomas wrote a disser­tation that explored the effect of tourism on Black land ownership on the Sea Islands of South Carolina. Her recent research considers racial oppression and Black community resilience during the civil rights era in South Carolina.

But Detroit has been the focus of her research and teaching. That’s because what Thomas thought was a temporary stay in Michigan for her education turned out to be a permanent relocation; shortly after leaving South Carolina, Thomas met her future husband, Richard, a native of Detroit who intended to build his life and career close to home.

Detroit, in the wake of the riots of the late 1960s and amid the decline of the American automobile industry, was a fertile ground for study. “What I found in the North was not a real escape from the Deep South because there were similar kinds of racial traumas and injustices up North,” Thomas says. “So it seemed that the charge was to take that passion for social and racial justice that I had gained in South Carolina and to apply it to the situation I found myself in, in Michigan.”

Her publications about the city include Urban Planning and the African American Community: In the Shadows (with Marsha Ritzdorf); Redevelopment and Race: Planning a Finer City in Postwar Detroit; The City after Abandonment (with Margaret Dewar); and Mapping Detroit: Evolving Land Use Patterns and Connections (with Henco Bekkering). She won the 1999 Paul Davidoff Award from the Association of Collegiate Schools of Planning (ACSP) for Redevelopment and Race, which she wrote because “somebody had to write about the role of planning in the redevelopment of the Black community in Detroit,” she says.

“A lot of my work was just preparatory for everybody else. I mean that when I say it,” she adds. “It’s not that I wrote seminal work. I just wrote some of the first work. I said, ‘If I don’t start writing something that people can use in classrooms, nothing is going to change.’”

That sense of responsibility also led her to national leadership within her profession. Although she served as president of the Association of Collegiate Schools of Planning, she is proudest of co-founding the ACSP’s Planners of Color Interest Group in 2007, a response to the alarming drop in the number of tenured and tenure-track Black and Latino urban planning faculty.

“What’s the use of creating a literature that supports people of color if you don’t have any academics of color? They’re going to be the most motivated, and they’re the role models for students. You can’t have diverse programs unless you have those faculty,” Thomas says.

After earning her Ph.D., Thomas taught at Michigan State for nearly 30 years. As founding co-director of MSU’s Urban Collaborators Program and founding co-director of MSU’s Urban Planning Partnerships, she developed statewide initiatives to link urban planning services on campus with community development needs. Her friend Margi Dewar, now a professor emerita of urban and regional planning at Taubman College, convinced Thomas to join the University of Michigan faculty in 2007. Now the Mary Frances Berry Distinguished University Professor of Urban Planning Emerita and the Centennial Professor Emerita of Urban and Regional Planning, Thomas taught in Ann Arbor until she retired in 2020; she also was one of the founding instructors in U-M’s Semester in Detroit program.

It was an odd sort of homecoming for the alumna, whose student days had been a blur; during her nearly seven years as a Ph.D. student, she gave birth to her two children and also suffered a miscarriage. “We were here, but we weren’t here,” Thomas says of her and Richard’s early U-M days (he pursued a Ph.D. in history concurrently). “But coming back as a professor, it felt like coming home, like it was just such a wonderful place to be. Not only was it my alma mater, but it gave me a chance to engage more deeply in Detroit by teaching classes that focused on specific neighborhoods and projects, writing more, taking people there, and teaching there.”

Despite being well regarded for her work in Detroit, however, Thomas says her least-known book is her best: Planning Progress: Lessons from Shoghi Effendi, which she describes as a case study about planning theory from the perspective of a religious leader — how he planned to lead a community from one point in its development to another. “In this case, the community was a worldwide religious community, which I happen to be a part of,” she says.

While the book is well known among Baha’is, Thomas says it’s relevant for anyone who “wants to know if there was a link between planning theory and planning spirituality” — a topic she also wrote about recently for the journal Planning Theory and Practice.

A Baha’i since age 21, Thomas’s faith is integral to her academic work. “My work in my faith community is as important as my work in my profession because of my faith’s race unity agenda. Through that vehicle, I work in an interracial environment with people who are constantly promoting the idea of overcoming racial prejudice.”

By connecting spirituality and planning, Thomas says planners can transcend the profession’s limitations: “I’ve never expected that urban planning could solve deeply entrenched social problems that are embedded within bigger forces because urban planning is tied to bureaucracies that are dependent on what policies do or do not exist.”

But because they see the ripple effect of past policies, she argues in Planning Theory and Practice, “urban planners can help lead the way in protecting the values that guard human civilization, tapping religious or spiritual as well as secular traditions. … This is easier if we can summon the best of us, our finest selves; understand the social and racial justice challenges that lie in front of us, as well as creative strategies for addressing them; and move forward, with confidence and even joy, toward enhanced social action.”