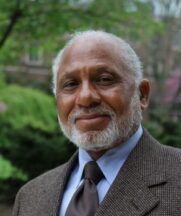 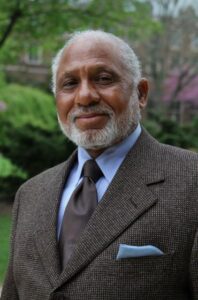 Seven faculty members have received 2022 Harold R. Johnson Diversity Service Awards, and another was honored with a Lifetime Achievement Award, for their contributions to the development of a culturally and ethnically diverse University of Michigan community.

Established in 1996, the annual award is given by the Office of the Provost in honor of Harold Johnson, dean emeritus of the School of Social Work.

This year’s recipients are:

In addition, Henry Meares of the School of Education received a Lifetime Achievement Award.

The awards included a $5,000 stipend. The following profiles were compiled from information submitted in award nomination letters:

Finks, associate professor of surgery in the Medical School, began at U-M in 2005 as a clinical assistant professor of surgery with a focus on minimally invasive and bariatric surgery. He has taken on several leadership roles within the Medical School, including as a facilitator for students during their surgery clerkship and currently as the associate clerkship director.

Through these roles, Finks observed there was very little racial and ethnic diversity among the medical student body and, additionally, there were almost no students from Detroit despite its proximity to Ann Arbor. Finks realized this problem stemmed in part from students’ limited exposure and mentorship into medicine and STEM fields before college.

In 2012, with startup funding from the Department of Surgery, Finks and a small group of medical students established Doctors of Tomorrow, a pipeline program and partnership between the Medical School and Cass Technical High School. Each year, approximately 30 ninth-grade students participate in the yearlong program.

Finks has been laser-focused on promoting diversity, equity and inclusion within the Medical School. His work has had a major impact, affecting the lives of hundreds of underserved high school students in Detroit and many more medical students at U-M. His work has inspired similar efforts here and across the country.

Freed, the Percy and Mary Murphy professor of Pediatrics in the Medical School and professor of health management and policy in the School of Public Health, has more than 25 years of experience in children’s health services research, with a central commitment to action for diversity, equity and inclusion efforts.

Working with the chairs of the Department of Pediatrics, Freed developed a first-in-the-nation visiting resident elective for students underrepresented in medicine that provided an all-expenses-paid month to see if the field was a fit for them.

For the past six years, he has been associate chair for DEI in the Department of Pediatrics, overhauling and developing one of the premier programs in the nation. Initially he developed the DEI Action Committee that resulted in new and innovative programming across faculty, staff and trainees. These efforts included support for research into inequity and disparities, book clubs, TED talk viewings and discussions, peer-mentorship groups, art projects and other programs to support interaction and inclusion within the department.

His national DEI activities include serving on the Committee for Diversity and Inclusion of the American Pediatric Society, and he is frequently called upon to speak on DEI issues at national pediatric meetings and as a visiting professor.

Jenkins, professor of electrical engineering and computer science and associate director of the Robotics Institute in the College of Engineering, joined U-M in 2016. He has been active and outspoken about racial equity issues and has emerged as a clear and compelling voice for urgent progress in his field.

In June 2020, Jenkins and associates wrote an open letter expressing “a call to action to the computing community to address the systemic and structural inequities that Black people experience.” It described the toll anti-Black racism has taken on society, including the field of computing, and focused on what individuals, organizations and communities could do.

Jenkins recently worked to design a robotics curriculum that is more accessible to students who did not have access to advanced mathematics and technology, which often are prerequisites for involvement in the field.

He also has led efforts to improve the inclusion of minorities in robotics and computing, and participates annually in recruiting talented students at the National Society of Black Engineers conference and the GEM Grad Lab.

Jenkins strives tirelessly to help combat the climate issues of minority students who feel “weeded out” of CSE degree programs. He established the “Minorities in Computing,” a weekly two-hour social tea to foster support and community for underrepresented students.

Mahalingam, professor of psychology and women’s studies and director of the Barger Leadership Institute in LSA, studies how certain lines of work are devalued, and its workers marginalized.

For more than 25 years, Mahalingam has investigated the production, perpetuation and consequences of social marginality in many cultural contexts. He takes an intersectional approach to investigating questions of equality and social justice.

He is one of few psychologists to study issues of diversity and identities in the cultural norms and hierarchies of India and the United States. In both countries, he examines issues of power and discrimination at various intersections of caste, gender, class, ethnicity and sexuality.

Mahalingam’s work has always focused on social justice, and currently his scholarship has focused on using mindfulness to address social injustice.

Mahalingam recently was invited to address the lack of diversity in higher education at a conference sponsored by Brown University, and he was invited to present at the Ambedkar International conference in Bangalore, India.

His focus on equity and social justice is also embodied in his teaching. To examine parallels between race and caste, Mahalingam took African American students to India to meet with Dalit women activists and explore the lived experiences of caste, race, class and gender.

Meares, assistant dean, director of community, development and outreach, and an instructor in the School of Education, is the recipient of a Harold R. Johnson Diversity Service Lifetime Achievement Award.

Since 2021, he has been interim chief diversity officer for SoE during a critical strategic planning and assessment year for both the school and the university, and has championed just and equitable education and advocated for students of all ages.

One example of Meares’ dedication to advancing diversity, equity, and inclusion is his work to engage with and recruit from Historically Black Colleges and Universities and other minority-serving institutions. He creates institutional partnerships and builds mentorship relationships with the students he recruits.

Broadly, his work serves a need to encourage and support Black males in their pursuit of education careers. He continues this work as adviser of SoE’s Black Male Roundtable group.

Partridge, professor of anthropology and of Afroamerican and African studies in LSA, exemplifies a dedication to diversity, equity and inclusion through his public-facing scholarship, creative teaching and pedagogy, service as chair of the Faculty Senate Committee on Anti-Racism, and seat on the Senate Advisory Committee on University Affairs.

He has long service as a Rackham Faculty Diversity Ally, advocates for students and faculty of color in the departments of Anthropology and Afroamerican and African Studies as well as on campus, and collaborates with communities of color in Detroit and Berlin.

Partridge’s participatory filmmaking work distinguishes his scholarship and pedagogy. Since 2013, he has worked with refugees, migrants, students and activists in Ann Arbor, Detroit and Berlin to research, film, edit and produce multiple series of short films.

He is committed to mentor all students, but especially students who identify as Black, Indigenous or People of Color. Underscoring his work is Partridge’s commitment to care, compassion and inclusion as central tenets of what it means to be a leading scholar and role model for institutional change.

Throughout his 30 years at U-M, Ransom, a multicultural studies librarian with the University Library, has consistently demonstrated an exceptional level of service, scholarly activity and commitment to students, faculty and staff, particularly those engaged in diversity-related scholarship.

He is a liaison with the departments of American Culture and of Afroamerican and American Studies, and his outreach efforts and relationships extend far beyond these academic units to cross disciplinary and organizational boundaries. If Ransom sees an opportunity where he can collaborate, mentor or help, he takes it.

Ransom has demonstrated his dedication to diversity, equity and inclusion through his work as a faculty adviser in the Global Intercultural Experience for Undergraduates program, where he led student study abroad trips to Kenya.

For two decades, Ransom has also led the U-M Library’s contributions to the National Conference on Race and Ethnicity, has worked to build a responsive and inclusive library collection, and has inspired his library colleagues to look beyond the mainstream collection materials that are easy to acquire through traditional library channels.

A current project of Ransom’s is a comprehensive history and digital archive of the William Monroe Trotter Multicultural Center, U-M’s primary center for multicultural engagement for students and faculty.

She has demonstrated a commitment to recruiting a more diverse group of students and faculty, improving the experiences of students from underrepresented groups, and providing an inclusive and supportive atmosphere in her classes.

She also has increasingly addressed DEI issues in her scholarship and professional activities during more than a decade at U-M, continuously working to creating a more equitable environment, within her department, university and profession.

Soderstrom has been deeply committed to facilitating an inclusive classroom. In a required research methods class, she has introduced the Social Identity Wheel to help students explore and share their salient and intersecting social identities.

In 2020, Soderstrom became director of the Erb Undergraduate Fellows Program. Her colleague Emily Keeler, student affairs and alumni manager, said, “Sara has championed for equitable recruitment practices, including late admission for transfer students, lowering GPA requirements, and including optional essays, in which students could provide additional notes if they were impacted by COVID in order for staff to more holistically evaluate applicants.”