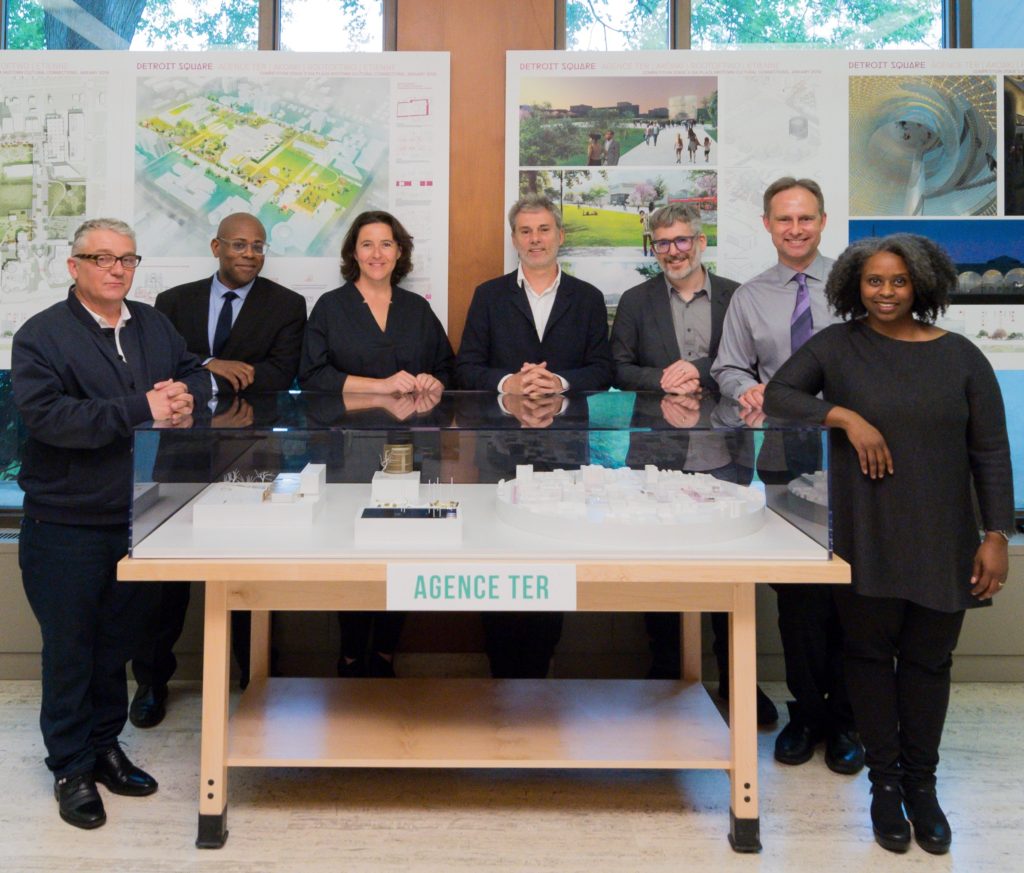 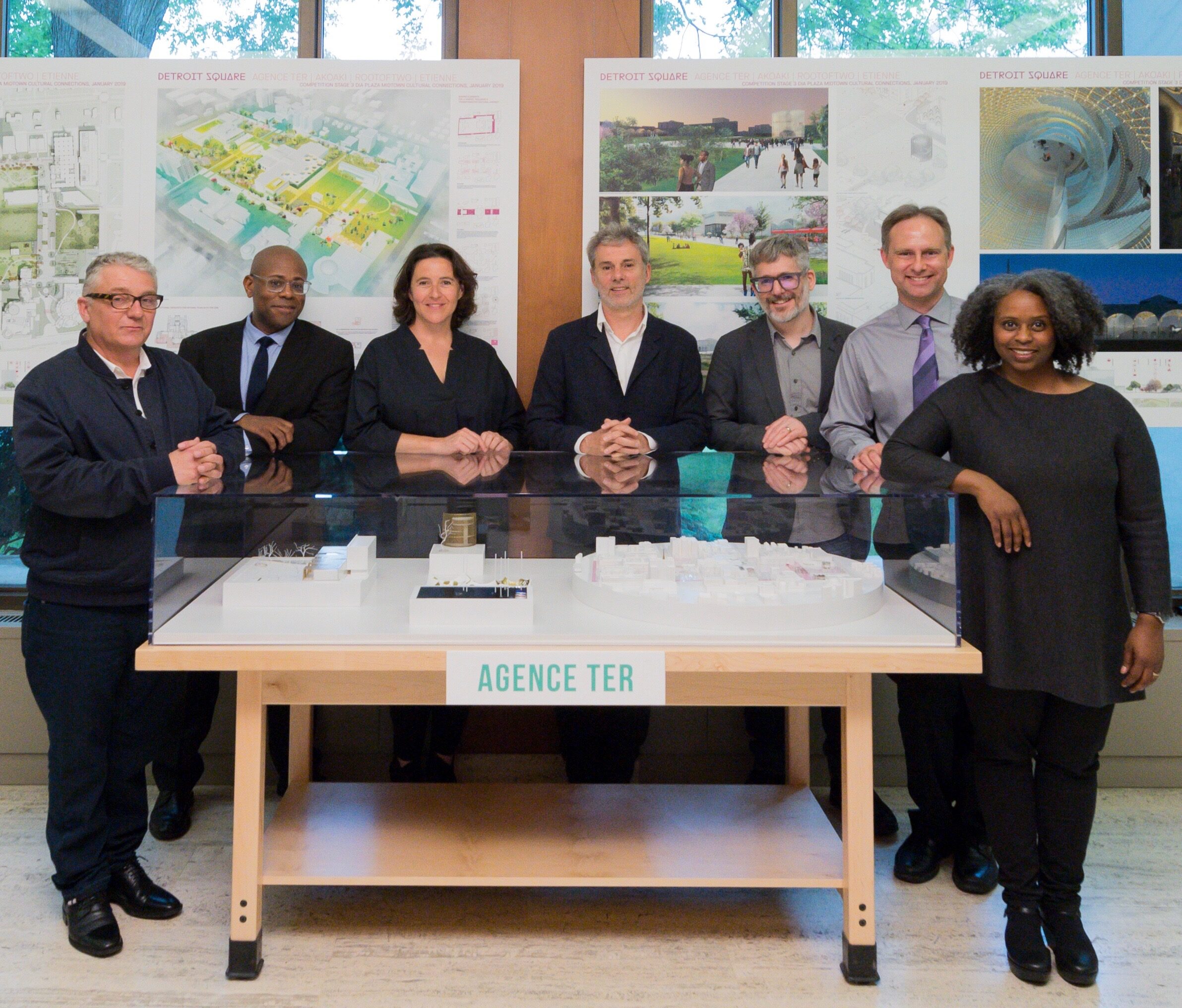 Three University of Michigan faculty members are part of the winning team of an international design competition that will unite 12 cultural and educational institutions located in Detroit’s Midtown and change the way visitors and Detroiters experience the area.

The winning project announced Monday at the Detroit Library and titled “Detroit Square,” offers a “locally-rooted, contextually, and environmentally responsive framework” to unify 12 public institutions and to create an inclusive cultural district for an spanning 83-acres in Detroit. It includes tweaks to the orientation of specific services and spaces within many of the buildings, a reimagining of various underutilized spaces and a complete overhaul of the grounds surrounding each institution. 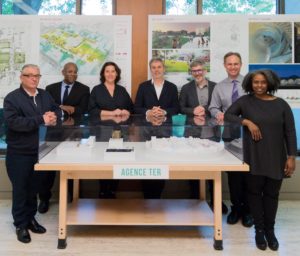 Some ideas from the team’s radical proposal include plans for a “data jockey booth” to serve as a hub for both performance and technology infrastructure; a “canopy”—or series of domes enclosed in glass—that would serve as additional exhibition and event space at outside of the DIA, a “Respect Cafe” outside of the Charles Wright Museum of African American History that pays homage to the late Aretha Franklin; and a “public living room” at the Detroit Library.

“Our proposal is not calcified or absolute; it is designed to evolve,” said Anya Sirota, an associate professor of architecture at U-M Taubman College of Architecture and Urban Planning, and principal of Detroit-based studio Akoaki. “We’ve provided an operational diagram rather than a finished proposal, and now it needs to be adjusted with real input from all of the stakeholders and community.”

The winning team includes Sirota, Harley Etienne, an urban planner and assistant professor of urban and regional planning at the U-M Taubman College; and John Marshall, an associate professor at the U-M Penny W. Stamps School of Art & Design and Taubman College, and co-director of the Detroit-based hybrid design studio rootoftwo.

“We are so grateful to have won this,” Etienne said. “We’re excited to start this process. We feel a deep sense of responsibility for this project.”

Other team members include Jean Louis Farges of Akoaki; Cézanne Charles, co-director of rootoftwo and alumna of the U-M Ford School of Public Policy; and Agence Ter, an internationally renowned landscape and urban design studio based in France.

“Having been selected, it feels very good to have the confidence of the participating institutions and the city—each willing to work with us on a process that will hopefully culminate in a response calibrated to many parallel and individual needs, while still retaining a sense of unity and place,” said Sirota. “The competition organizers are taking a chance on a project dedicated to creating inclusive social environments through process driven work.”

The DIA Plaza/Midtown Cultural Connections competition was launched in 2017 by Midtown Detroit Inc. and the Detroit Institute of Arts. All told, 44 submissions from more than 10 countries and 22 cities were narrowed down to three finalist teams, who presented their ideas to a panel of judges in January.

One judge, City Planner Maurice Cox, said he felt privileged to be the planning director at a time when “Detroit is daring to dream big” again.

Another idea that made the Detroit Square idea take off includes the opportunity “to leapfrog the current generation of technology and do something that is very progressive and future proof,” Marshall said. Public wifi, 5G connection, LED controllable lighting, sound projection mapping, and outdoor urban screens that utilize sensors throughout the square are also part of the master plan. 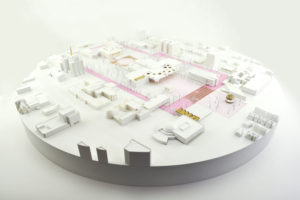 “We’re obviously viewing this through a technology lens, but we’re also looking at it through a social justice lens,” Marshall said. “We’re going to design for 5G in a way that big tech companies won’t—we’re interested in protecting the privacy of the citizens that interact with the space.”

The team also looked at ways to create more parking, reroute traffic, and adjust speeds of cars moving through the district to promote a more pedestrian friendly experience.

“I think it’s very exciting for U of M faculty stepping up to play, hopefully, a very big role in setting the shape of this neighborhood, this crown jewel of the city for decades to come,” Jonathan Massey, Taubman College dean, served as one of the 11 competition jurors. “I hope it has the impact we are imagining.

“I also think it will be good for the university that the Rackham building is going to pull us into this neighborhood more fully than we have been in the past. And I’m hoping that that double connection, the real estate of the Rackham building and the faculty role in the design will help us in Ann Arbor, Flint and Dearborn to have a stronger presence and connection and engagement with this amazing city,” Massey said.

Beginning in July, the team will start the first in a three-phased a conceptual planning process. Over the next 18 months, the team will conduct a topographic survey, tree survey, mobility study, parking study, stormwater management survey, lighting survey and more. They’ll also meet with each of the stakeholders, and are planning to open a storefront in downtown Detroit in order to be available to the community as the project progresses. It is estimated to take seven to 10 years to complete.

The design plan for Detroit Square takes Detroit to another level, Cox said. “It allows each institution to not only reinforce its identity, but to grow in magnitude as a result of being finally, intentionally brought together by a public realm strategy.”