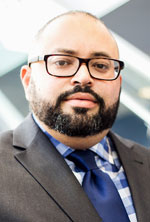 Feodies Shipp III started his career in higher education with the U-M Career Center in 1995. From 1996 to 2010, he worked in the university’s Office of Undergraduate Admissions first as an admissions counselor and then as assistant director. In 2010, Shipp was named associate director of the U-M Detroit Center. Through this position, he was able to combine two of his greatest passions — the University of Michigan and the city of Detroit.

Born and raised in Detroit, Shipp is excited by the city’s rebirth and believes the university can be a significant contributor to that experience. He earned his B.A. in History from U-M and his M.A. in educational leadership from Eastern Michigan University.