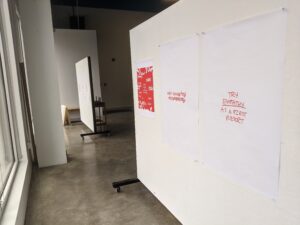 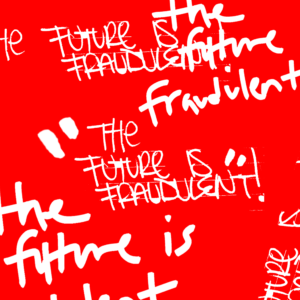 I started writing down my thoughts, day by day, into a tablet I used for drawing. At first, they were a list of potential poster ideas, but once I started to see my thoughts build up in quantity, they began to take on a different meaning and form. This is when I started to get more abstract with how I translated my thoughts; an example of this is how I would take a thought, boil it down by stripping away details such as descriptive words, playing with the main idea, and ultimately, create a message that could plant inself in the mind of the viewer, forcing that viewer to try and make sense of the cryptic script, like song lyrics that brush against the ear. Once I had my messages, I started to play around with the visual translations of them; minimal space and minimal color so they appear as strange tweets or posts you’d scroll through on social media. I started manipulating the messages even further by playing with the visibility of them; playing with text layering (I learned from Basquiat that covering messages makes people want to read them more) and applying them to billboards, street walls, benches… any public space really. Once these messages reach the public, they plant themselves in reality and take on a life of their own. They can exist as street graffiti (“OFFLINE”), poetry (“…BUT I THOUGHT BLACK WAS BEAUTIFUL”, “LIKE EARLESS ARTISTS FOR AN EYELESS AUDIENCE”), warnings (“CONFORMING DUE TO A SATURATED COUNTER CULTURE”, “THE FUTURE IS FRAUDULENT”) or quotes (“…NOW I JUST THINK ABOUT MY RELATIONSHIP TO ETERNITY”). For me, this was a library of thought that I accumulated over the course of a few weeks, thoughts that I emphasized in different ways to achieve various reactions from viewers. For my audience, these messages could serve as a dose of truth, a sense of control, a feeling a relief, or something to believe in, in a time where fake news and disinformation control the public sphere. This was the voice I was looking for.